MONSTERS ALL THE WAY DOWN

In Wake of Fakhrizadeh’s Killing, Ex-Mossad Spies Offer Insight Into How Assassinations are Plotted 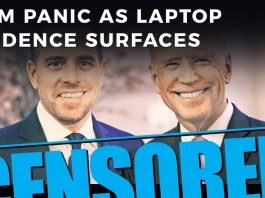 The title of today’s post is not meant to be taken literally. I trust plenty of people. I trust friends who’ve demonstrated their trustworthiness over the years. I trust my family. Having people in my life I love and trust makes everything far more meaningful and pleasant. I hope people reading this likewise have a circle of trust they’ve built over the years.

On the other hand, you should never trust anyone or anything that hasn’t given you good reason to do so, and if someone or something gives you good reason not to trust them, you should never forget that. The more power a person or institution has in society, the less trustworthy they tend to be. I don’t say this because it’s fun to be cynical, I say this because my life experience has demonstrated its accuracy.

END_OF_DOCUMENT_TOKEN_TO_BE_REPLACED

John Rubino is back… Houston we have a problem. Chinese and Hong Kong banks are running out of dollars. But I thought we had too many of them floating around the world. Guess not. There’s plenty more where they came from. It’s just another example of the glue that holds together the world financial system coming apart at the seams. First it was the staid repo market. Now it’s foreign banks running out of the reserve currency. As Martin Armstrong often explains, 70% of the 100 dollar bills in circulation are held overseas. So much for the immediate demise of the reserve currency. Special shout-out to my son-in-law’s father, John Kirby, who passed on last week. A prince among men and one of those important people you’ve never heard of.

Where, Why and How to Hold Gold and Silver For The Coming Collapse with James Turk of Goldmoney 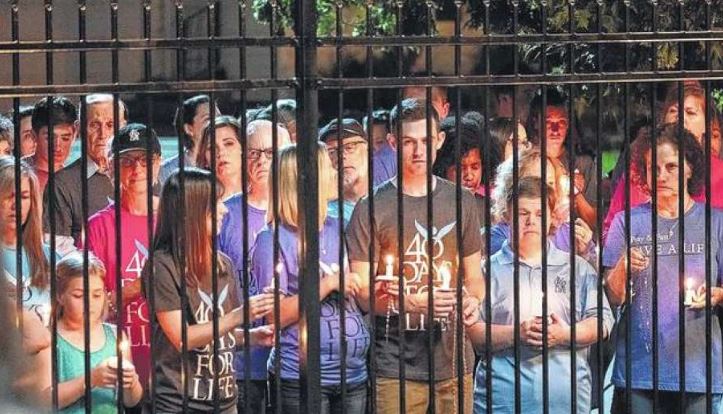 Over the weekend, I was where I needed to pass some time and thought an early afternoon matinee would do the trick. Although I was not overly enthused to see any of the films currently showing, I chose to see “Unplanned“.  Mainly because the title seemed apropos just then and the movie’s starting time fit my schedule. Moreover, it looked to be a political film about the controversial subject of abortion and was, in fact, based on a true story.

END_OF_DOCUMENT_TOKEN_TO_BE_REPLACED

Trump and American History Have Been Assassinated

When Trump was elected I wrote that it was unlikely that he would be successful in accomplishing the three objectives for which he was elected—peace with Russia, the return home of offshored US jobs, and effective limits on non-white immigration—because these objectives conflicted with the interests of those more powerful than the president.

I wrote that Trump was unfamiliar with Washington and would fail to appoint a government that would support his goals. I wrote that unless the ruling oligarchy could bring Trump under its control,Trump would be assassinated.

Trump has been brought under control by assassinating him with words rather than with a bullet. With Steve Bannon’s dismissal, there is now no one in Trump’s government who supports him. He is surrounded by Russophobic generals and Zionists.

But this is not enough for the liberal/progressive/left. They want Trump impeached and driven from office.

Marjorie Cohn, whom I have always admired for her defense of civil liberty, has disappointed me. She has written in Truthout, which sadly has become more like PropagandaOut, that the House must bring articles of impeachment against Trump for his abuse of power and before he launches a new civil war and/or nuclear war.

This is an extraordinary conclusion for a normally intelligent person to reach. What power does Trump have? How does he abuse his non-existent power? The ruling Establishment has cut his balls off. He is neutered. Powerless. He has been completely isolated within his own government by the oligarchy.

Even more astonishingly, Marjorie Cohn, together with 100{5f621241b214ad2ec6cd4f506191303eb2f57539ef282de243c880c2b328a528} of the liberal/progressive/left are blind to the fact that they have helped the military/security complex destroy the only leader who advocated peace instead of conflict with the other major nuclear power. Cohn is so deranged by hatred of Trump that she thinks it is Trump who will bring nuclear war by normalizing relations with Russia.

Clearly, the American liberal/progressive/left is no longer capable of rational thought. Hate rules. There is nothing in their lexicon but hate.

Little do they understand. Ajamu Baraka spells it out for them in CounterPunch. White Supremacy, he writes, is inculcated into the cultural and educational institutions of the West. Liberal and leftist whites are also white supremacists, says Baraka, and Trump and the “alt-right” are nothing but a superficial useful platform on which the white supremacist American liberal/progressive/left can parade its self-righteousness. Ajamu Baraka’s conclusion is “that in order for the world to live, the 525-year-old white supremacist Pan-European, colonial/capitalist patriarchy must die.” It is not difficult to see in this statement that genocide is the solution for the white plague upon humanity. Little wonder the “alt-right” gets exercised by the anti-white propaganda of Identity Politics.

Non-white immigration will finish off the shards of remaining European civilization. All current demographics indicate that all of Europe and North America will sooner than you expect be occupied by non-white majorities.

The problem is not so much the immigrants themselves as it is that they are taught to hate whites by white liberal/progressive/leftists. The destruction of statues will not end with Robert E. Lee’s. Thomas Jefferson and George Washington are next. They owned slaves, whereas the Lee family’s slaves were freed by will three years prior to the Lincoln’s invasion of the South. The Washington, Jefferson, and Lincoln memorials will have to be destroyed also as they, too, are momuments to racism. Indeed, according to the Identity Politics of the Liberal/progressive/left the Declaration of Independence and the US Constitution are White Supremacy documents written by racists. This doubles the indictment against Thomas Jefferson and adds all of the Founding Fathers to the indictment. All are guilty of institutionalizing White Supremacy in America.

The uninformed insouciant Average American may think that this is a joke. But no. It is the orthodoxy of the white American intellectual class. It is taught in all the universities.

In Atlanta they are talking about erasing the heads of the South’s generals carved into Stone Mountain. Mount Rushmore in South Dakota will be next. It has carved into it the heads of Washington, Jefferson, Theodore Roosevelt, and Abraham Lincoln. All racists, and Roosevelt was a colonialist and imperialist to boot. Lincoln was the worst racist of all.

Economist/historian Thomas DiLorenzo reminds us that “to his dying day, Lincoln was busy plotting the deportation of all the black people in America, including the soon-to-be-freed slaves.”https://www.lewrockwell.com/2015/11/thomas-dilorenzo/next-target-blacklivesmatter/

The following statements are all statements that are in Abe Lincoln’s Collected Works:

“I have said that the separation of the races is the only perfect preventive of amalgamation [of the white and black races] . . . Such separation . . . must be affected by colonization” [sending blacks to Liberia or Central America]. (Collected Works of Abraham Lincoln vol. II, p. 409).

Devin Nunes Discusses The Fraud Behind The Chris Steele Dossier…

HPSCI Ranking Member Devin Nunes discusses the fraudulent narrative that surrounds the Steele Dossier, and the credibility of Christopher Steele, against the backdrop of recent lawsuits by himself and the Trump administration against U.S. media.

END_OF_DOCUMENT_TOKEN_TO_BE_REPLACED

Things are accelerating fast, as the markets finally come to the same realization I reached over a month ago: the coronavirus will have a massive economic impact that could possibly send the world into a severe recession.

The reasons for this have been well documented through my last number of articles. However, it bears reiterating that tourism, global travel, and the vital supply chains that so many companies now rely on in this new age of globalism will be severely impacted, possibly even crippled, as this virus continues to spread across the world.

END_OF_DOCUMENT_TOKEN_TO_BE_REPLACED

The Fantasy of Central Bank “Growth” Is Finally Imploding

Having destroyed discipline, central banks have no way out of the corner they’ve painted us into.

It was such a wonderful fantasy: just give a handful of bankers, financiers and corporations trillions of dollars at near-zero rates of interest, and this flood of credit and cash into the apex of the wealth-power pyramid would magically generate a new round of investments in productivity-improving infrastructure and equipment, which would trickle down to the masses in the form of higher wages, enabling the masses to borrow and spend more on consumption, powering the Nirvana of modern economics: a self-sustaining, self-reinforcing expansion of growth.

END_OF_DOCUMENT_TOKEN_TO_BE_REPLACED

President Donald Trump has come out suggesting Brett Kavanaugh should sue for “libel” after a fresh sexual assault allegation has emerged against the Supreme Court justice in the New York Times. Trump initially misspelled the word “libel” as “liable” and this of course sent mass media into a frenzy.

END_OF_DOCUMENT_TOKEN_TO_BE_REPLACED

The Covid-19 Pandemic and the Corruption of Genuine Science Medical science has made such tremendous progress that there is hardly a healthy human left. — Aldous Huxley

For half a century, the pharmaceutical industry has shown near zero tolerance towards criticism against its unequivocal failures and medical catastrophes. Permanent disabilities and deaths due to unsafe drugs, such as Merck’s anti-inflammatory drug Vioxx, Pizer’s Bextra, synthetic hormone replacement therapy, thalidomide, and the earlier cellular pertussis and the 1976 influenza vaccines, are regarded as the collateral damage of getting unsafe medical products on the market. During the past two decades a tightly-knit and collaborative relationship has evolved between the pharmaceutical industry, federal health agencies, Congress, Silicon Valley, and the new culture of billionaire philanthropists such as Bill Gates. Due to the large web of funders favoring corporate financial interests and CDC-sponsored educational programs, the mainstream media is now the successful advertiser for pharmaceutical ambitions. As a consequence, modern medicine’s dire risks to public health are undermined. The broader picture and the darker players operating behind the tragic legacy of medical iatrogenic failures remain largely hidden from the public. In recent years those physicians, researchers and health advocates who dissent from the pharmaceutical narrative often face a formidable blowback resulting in censorship and destroyed reputations.

END_OF_DOCUMENT_TOKEN_TO_BE_REPLACED 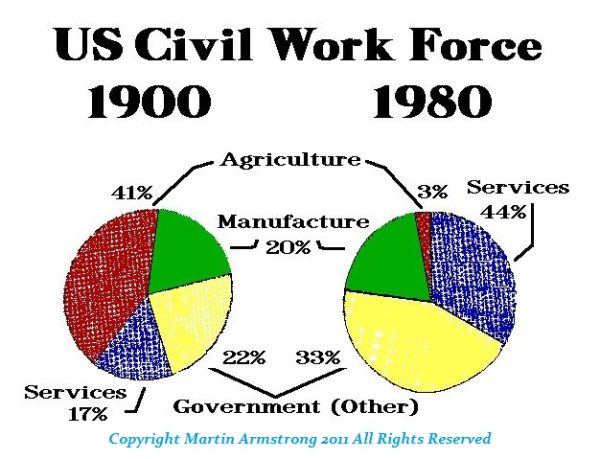 QUESTION: You do a lot of comparison to the Roman Empire. What was the size of the government relative to GDP? Can you estimate that?

ANSWER: The Roman economy was more like the USA during the mid-19th century in that it was pre-industrial. About 80% of its inhabitants worked in agriculture, which was about where we were in 1840. There was no social agenda of trying to redistribute wealth from one class to the other. Still, there were social programs. But the socialistic agenda that was adopted by modern governments has sought not merely to redistribute wealth among the classes, but it has justified bigger government on a grand scale never before witnessed in history.

END_OF_DOCUMENT_TOKEN_TO_BE_REPLACED

Why Everybody Was Wrong About The Cultural Appropriation Scandal