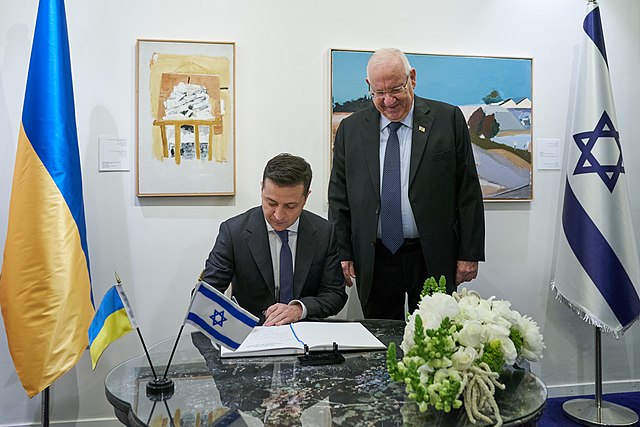 President Volodymyr Zelensky on Tuesday announced his goal for Ukraine is to turn it into a “Greater Israel.”

From Mil.in.ua, “Security will become our number one priority. Ukraine will become a ‘Greater Israel’ — Zelensky”:

Ukraine will not become a “liberal” state in the near future, and the issues of security will become our number one priority, said Volodymyr Zelensky, President of Ukraine, per NV reports.

END_OF_DOCUMENT_TOKEN_TO_BE_REPLACED The US government promotes an international conspiracy

There have appeared a couple of stories recently that illustrate how there is only one “red line” that no one dares cross in Washington and that is criticism of Israel and its associated supportive mythologies of increasing “holocaust denial” and “surging anti-Semitism.” The rule is ruthlessly enforced by the Israel Lobby, often by its redoubtable Anti-Defamation League (ADL), which is based in New York City but has a regional office in the capital, conveniently close to government offices, from which vantage point it can observe possible deviations and mete out instant punishment.

END_OF_DOCUMENT_TOKEN_TO_BE_REPLACED

David Weiss and his clever friend Suzanne join me to ring in the new year with TRUTH. [Pictured: Execution of the Lincoln conspirators, 1865]

A ZIONIST PLOT TO EXTERMINATE US?

by Edmund Connelly, The Unz Review: Make no mistake about it: we intend to keep bashing the dead white males, and the live ones, and the females too, until the social construct known as ‘the white race’ is destroyed — not ‘deconstructed’ but destroyed.
Noel Ignatiev in his journal Race Traitor

The open pursuance of ‘Whiteness Studies’ must be perceived as nothing less than an act of extreme, even violent, aggression against the White race.
Andrew Joyce on Whiteness Studies

END_OF_DOCUMENT_TOKEN_TO_BE_REPLACED

This morning a podcast listener asked me what Zionism is. Then tonight I watched a “hate crime” hit piece on the NBC Nightly News. I feel compelled to address both.