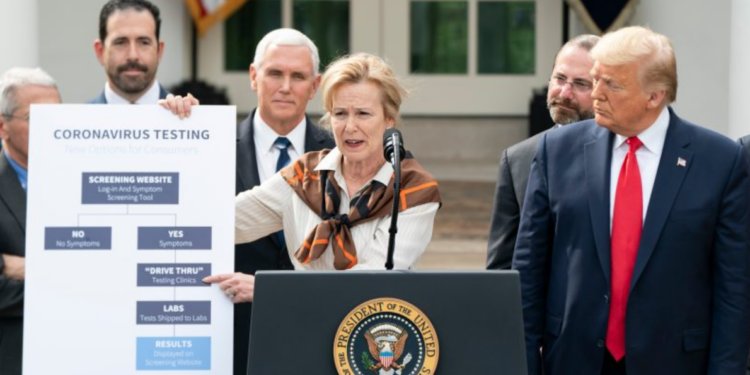 In previous articles I discussed the probability that Deborah Birx, the White House Coronavirus Task Force Coordinator, was not a representative of the public health agencies but, rather, was appointed by the National Security Council. I now have proof that this was, indeed, the case. I have also uncovered documents that show:

On March 11th 2020, at a Heritage Foundation Talk, Trump’s National Security Advisor, Robert O’Brien when discussing what the White House and NSC were doing about the virus, confirmed that the Covid Task Force Coordinator was brought in by the NSC. He said:

We brought into the White House Debi Birx, a fantastic physician and ambassador from the State Department. We appreciate Secretary Pompeo immediately moving her over to the White House at our, well at the President’s, request. (min. 21:43-21:56)

This is the pandemic response organisational chart from page 9 of PanCAP-A, showing the NSC solely responsible for Covid policy:

What is the National Security Council? According to its website, the NSC “is the President’s principal forum for considering national security and foreign policy matters with his or her senior advisors and cabinet officials”.

The NSC does not include as regular attendees any representatives from public health related agencies.

It does include the President’s National Security Advisor, who is “the President’s most important source of policy advice on foreign and national security policy”, according to the White House Transition Project’s document for the National Security Advisor and Staff. “In some administrations,” the document continues, “foreign and national security policy making is essentially centralised in the hands of the NSC advisor with minimal input from cabinet-level departments such as State or Defence.” Furthermore, “there is little statutory or legal constraint (beyond budgetary limits) in how the role of NSC advisor is defined or how the NSC staff is organised and operates.” (pp. 1-2)

In other words, if the NSC is in charge of Covid response, it can pretty much decide and impose anything it wants without any constraints or oversight, as long as the President agrees, or at least lets them take the lead.

But what exactly is PanCAP-A, in which the NSC appears in such a surprising Covid-response leadership role?

PanCAP-A is the closest the U.S. has to a national Covid response plan. PanCAP-A stands for “Pandemic Crisis Action Plan – Adapted”.

An exhaustive online search did not turn up the Pandemic Crisis Action Plan from 2018, which was apparently “adapted” to produce PanCAP-A. However, the existence of the original document is confirmed in various documents, including a statement on “Preparedness for COVID-19″ presented to the U.S. Senate Committee on Homeland Security and Government Affairs on April 14th 2021.

In this statement, Elizabeth Zimmerman, a former FEMA Administrator, who is sharing with the Senate Committee her findings on “The Initial Pandemic Response and Lessons Learned”, says she had trouble finding the Government’s plan for the U.S. response to COVID-19:

Then, in reference to the plans she was able to find, or knew about but may not have actually seen, she says:

Following the Anthrax attacks in 2001, the federal Government invested a lot of money on processes and plans centred on public health response – bioterrorism and pandemics in particular. … One of the latest plans, January 2017, is the Biological Incident Annex (BIA) to the Response and Recovery Federal Interagency Operational Plans (FIOPs). The BIA is the federal organising framework for responding and recovering from a range of biological threats, including pandemics.

However, it was not publicly seen that these plans were being used during the onset of COVID-19 nor does it seem that there was a national COVID-19 response plan.

Finally, she references the 2018 PanCAP, the adapted PanCAP, and then makes another surprising statement:

Also, there was a 2018 Pandemic Crisis Action Plan (PanCAP) that was customised for COVID-19 specifically and adopted in March 2020 by HHS and FEMA; the plan identified the U.S. Department of Health and Human Services (HHS) as the Lead Federal Agency (LFA) with FEMA supporting for coordination. However, a mere five days after the national COVID-19 emergency was announced, FEMA became the LFA.” [boldface added]

This means that, in effect, starting on March 18th 2020, the Department of Health and Human Services (HHS) – which comprises the CDC, NIAID, NIH and other public-health-related agencies – had no official leadership role in pandemic response – not in determining policy and not in implementing policy.

This is a staggering piece of information, considering that all pandemic preparedness plans, as Zimmerman notes, placed the Health and Human Services Agency (HHS) at the helm of pandemic response.