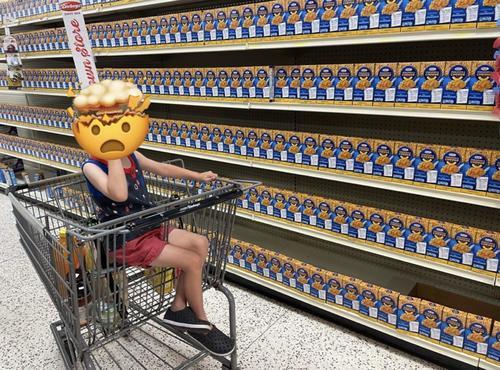 It’s only hypercritical people like me who think that the Biden administration is doing an utterly terrible job. The reality is, everything is just fine except for a few pesky hoarders who are causing problems.

The mainstream media, POTUS’s Chief of Staff, and White House spokeswoman Jen Psaki said so, and we all know they’re both utterly reliable sources.

In reality, grocery store shelves are full. They’re full because they took a page from the script of The Interview, in which two goofy journalists go to North Korea to interview/kill Kim Jong Un. At first, they fall for the propaganda, but then one of the journalists enters the shop that looks to be loaded with abundance only to find out that the food is fake.

After #EmptyShelvesJoe trended on Twitter last week, Zero Hedge reports that retailers got serious about covering the gaps. They pointed out that all over the nation, stores are filling shelves with a single line of the few things they have to make it appear the inventory is full and things are thriving, sharing the following tweets.

Our Safeway appears to be trying to hide the supply shortage by using single lines of products to fill shelves. Leading to this: pic.twitter.com/CDXR67FYRu

And it’s not just in the United States, incidentally. In London, a Twitter user claimed that Tesco had gone one step further and actually put out fake asparagus.