This article posits that fiat currencies are on the path to hyperinflation and looks at the evidence in the prices of financial assets and commodities. So far, gold has notably underperformed, which indicates that the early signals of hyperinflation are confined to the cryptocurrencies, whose participants broadly understand fiat debasement, to equities reflecting the desire not to maintain cash and deposit balances, and in international trade, where commodity prices of all stripes have risen in price.

Given that the early warnings of hyperinflation of money supply are here, the article then looks at the qualities required of a sound money to replace fiat currencies.

Figure 1 shows how prices have moved from the Friday before the Fed’s announcement on 23 March that it would go all-in on its support for the US economy with unlimited quantitative easing. It amounted to a commitment to hyperinflate the money supply if needed. Before the Fed cut its funds rate to zero on 16 March nearly all these prices were falling. 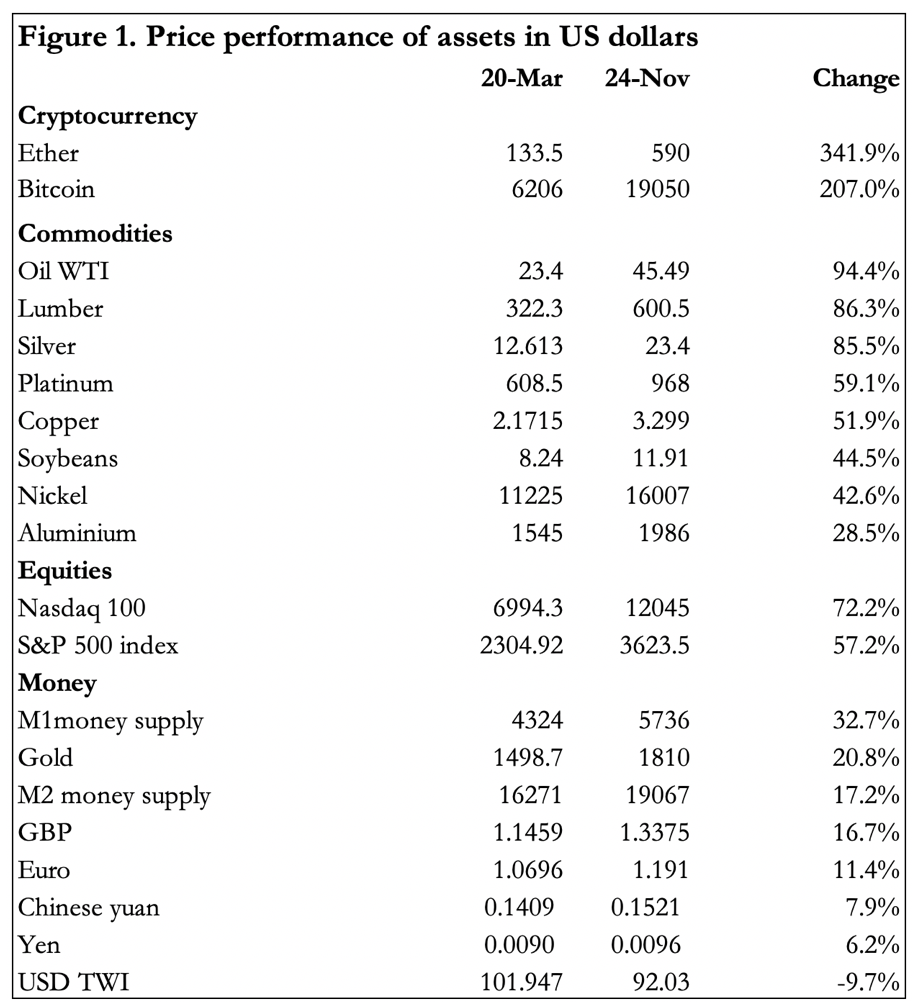 Since late-March every category has seen increases in prices. Sector and specialist analysts will always claim that there are identifiable reasons why prices for an individual category or commodity have risen. But the fact is that with the exception of the dollar and the other fiat currencies listed in the table all prices have risen. This cannot happen without the dollar and these currencies losing purchasing power.

While being far from exhaustive in its representation, Figure 1 shows that on the back of existing and perhaps anticipated expansion of money supply, cryptocurrencies have seen the most substantial rises. Putting to one side the debate as to whether cryptocurrencies can be a replacement for fiat currencies, in the general population it is their followers who are most aware of fiat currency debasement. In a monetary inflation, the fact that a significant minority of economic actors understand what governments are doing to money early in the hyperinflationary process does not appear to have happened before. It invalidates the old saying that not one person in a million understands what is happening to their money.

More people are flocking to cryptocurrencies, and while they appear to be predominantly driven by the prospect of profit rather than seeking an insurance against the demise of their local currencies, we cannot doubt that most of them have learned the lessons about money that evaded their forebears.

That being the case, we can assume that far from being just a speculative bubble, the rise in prices for bitcoin, ether and other cryptocurrencies anticipates further falls in purchasing power for government currencies, yet to be reflected in the other categories.

The rise in commodity prices varies considerably, but at a time of global economic slump, they are all higher not just in dollars, but measured in the other currencies represented in the table, which can only be a reflection of monetary debasement. Equities have also been strong with the more volatile NASDAQ 100 outpacing the S&P 500 index. And as if to ram the point home commodities and equity prices fell heavily on deflationary fears before the Fed’s unending stimulus was announced in March, only recovering and rising subsequently. The divide between deflationary and inflationary expectations could not be more marked.

Not all items in Figure 1 turned higher precisely on 20—23 March. Gold bottomed at $1452 earlier on 16 March, the day when the Fed cut its funds rate to zero. It rallied before falling to test $1456 on 20 March before closing at $1498.7. Nevertheless, a rise of 20.8% puts it between the increase in M1 money supply and M2. The WTI Oil price went negative on 20 April due to delivery problems on Comex before recovering strongly to rise over 90% on balance from late-March.

In the currencies, only the euro and sterling rose more than the dollar’s trade weighted index fell. And priced in all these currencies, the other items in Figure 1 increased.

The relationship between money and prices

There is usually a time lag between an expansion of the money quantity and its effect on prices, depending on the route it takes to full circulation. The lack of any distinction between existing and new circulating currency conceals its existence. And while every economic actor knows that government money loses purchasing power over time, it is still regarded by transacting parties as having the objective value while variations in price are reflected entirely in the goods or services being exchanged.

If the distribution of new money is channelled through increased government spending targeted at one part of the total economy, then the price effect is initially confined to a few corporations and locations in the sectors concerned, before it spreads to the wider economy before being disseminated by employees, contractors and subsidiary businesses. Alternatively, if money is distributed widely by a representational helicopter, the price effect is more instantaneous because it is more immediately spent mainly on consumer goods.

Even if the additional distribution of new money is made obvious to a population, it fails to grasp the consequences for the dilution of the existing stock of money. Like most analysts in the commodity markets, they initially think that prices are simply rising, and they fail to consider monetary debasement as the cause.

While the simple mathematical relationship between the quantity of money and the effect over time on prices is widely understood, other effects are less so. Changing the amount of money in circulation fatally corrupts statistical comparisons, yet financial analysts appear unaware of the profound differences between today’s money and that of the past. Furthermore, in more normal times the expansion and contraction of bank credit is usually a far larger variation of total money than its expansion by a central bank to fund a government deficit.