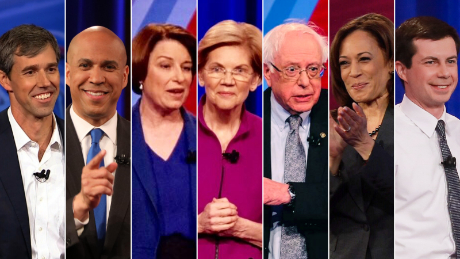 Just look at who the dastardly Democrats are running with for 2020?

Their emerging star — Pete Buttigieg — wants to bring the very First Man into the White House.  Can you imagine if this was the United Kingdom with two queens occupying Buckingham Palace… at the very same time?!  By the way, there’s a HUGE back story behind the completely improbable transformation of a small-town mayor, with absolutely no political accomplishment except being gay, into a 2020 Democrat heavyweight. See PETE BUTTIGIEG: Manchurian Candidate, Cultural Marxist and NWO Globalist Programmed to Destroy the American Republic

Then there is Pocahontas — Elizabeth Warren — who literally started her career by falsely claiming to be a Native America Indian.  Not only that, County Records Contradict Warren’s Claim She Was Fired Over Pregnancy.  Trump is right, Warren is quite dangerous due to her high degree of self-delusion.

Next, there is Crazy Uncle Joe Biden.  This guy is such a piece of work you can’t watch or listen to him without crackin’ up.  Talk about a sketch—he can’t even finish a sentence without lying multiple times… after he gets all the benign facts completely wrong.  How do you spell BIDENgate?  And we haven’t even begun talkin’ about his HIGHLY INAPPROPRIATE TOUCHING.  Is their even a single teenage girl inside the Beltway who hasn’t been touched by the incorrigible Pedogater? See PEDOGATE: A Global Child Trafficking and Exploitation Crime Syndicate

Let’s not forget the nation’s premier Berniac—Bernie Sanders.  He’s still incredulous that the good ole USA let a dyed-in-the-wool Brooklyn-born communist get so close to the Democrat nomination in 2016.  What’s quite amazing is that his base still hasn’t figured out that even Bernie doesn’t believe a single word he says.  He stands to get rich — AGAIN — from this second run, and the poor and destitute he claims to represent are his main contributors.  What a total scam artist?  Let’s also remember how Sanders endorsed Clinton after she outright stole the primary from him. See No, Bernie, your supporters will NOT support Hillary—EVER!

Of course, we cannot forget about Cory Booker.  This guy already has a serious allegation lodged against him for sexual harassment — BY A GUY — and he’s not even in the Oval Office yet.  What else needs to be said about a New Jersey politico who calls himself “Spartacus”.  By the way, why would the country ever elect someone who has already wrecked a whole state?!

How could we forget Michael Bloomberg, the man who forbade his own media company from publishing anything about him during the rest of the campaign season; they must have a LOT of dirt on him, yes?!?  Bloomberg has never seen a gun he didn’t want to confiscate.  Not only that, there’s also LOTs of circumstantial evidence that the Bloomster knew about 9/11… … …BEFORE IT HAPPENED!  See Michael Bloomberg & Bloomberg.com: A Long Overdue Exposé

Next up, there is another bored billionaire — Tom Steyer — who really thinks he can perform better than the Starbucks billionaire who dropped out long ago.  This Steyer candidate is so desperate he’s willing to spend billions to outright buy the White House.  Who’s advising him anyway—George Soros or Barack Obama or both?  Steyer is the typical ultra-liberal soy boy who’s perfectly willing to first destroy, and then remake, the whole world according to his progressive vision on steroids.

Another Democrat dude who really impresses as the previous 7 is Andrew Yang.  One wonders if the Yangster secretly received the Soros kiss of death given the way he now aggressively promotes the California LGBTQ agenda for the whole damn country.

Before Amy “Attila” Klobuchar even declared her candidacy for POTUS she was hammered by the press, both friends and foes.  Her bad temper in Washington, D.C. way preceded her announcement as left-wing rags and conservative platforms took her to task for being an abusive boss.  After she became an official candidate she found herself under even more scrutiny and assault by former staffers.  What she hoped to gain by provoking such a public flogging can only be explained in the “KEY POINT” below.  Most of these highly inferior candidates have been coerced or compelled to run by their hidden Deep State masters so it’s not their choice.  Pedogate vulnerability alone exposes these hapless clowns to all sorts of wretched demands and unsavory duties.

Then there is the anti-war candidate — Marianne Williamson — who really believes the Afghanistan War must go on in order to emancipate the Afghan women.  WOW ! ! !  This New Ager sounds so good to herself she doesn’t know when to stop talking.  Marianne appears to be the real CIA plant … you know the kind that were embedded all over the New Age Movement in order to control the opposition to the establishment. See: Marianne Williamson: CIA Plant, Neocon Warmonger, Cultural Marxist, MIC Stealth Candidate or all 4?

Now who can forget that Kamala Harris was in this race?  Her own peers hate her so much they ran her out of Dodge.  We’re talking about the proverbial bat out of hell who only knows how to screech her way to the top…except that this “female Obama” totally lost the plot. (See: The Worst of Kamala Harris–Video)  When you are born and bred in a CIA petri dish to become a female Obama, you don’t go off script every hour and expect not to be ignominiously gonged off the stage.  Her C.I.A. handlers especially didn’t like it when their MK-Ultra Mind-Control Monarchs went off script like she did during OPERATION CRAFTY BEAVER.

Remember, this is the creepy primary that also saw the notorious Beto O’Rourke exposed by his own writings in which he fantasized about running over children with his car.  This is the same guy who is determined to keep the borders open at all costs while looking to confiscate every gun in America.  The original Betobug proved himself to be dangerous to the extreme in so many ways he simply destructed. See Beto O’Rourke Writings Surface Showing He Fantasized About Killing Children, Plotting Mass Murders

Lastly, there was the insane and inimitable New York City Mayor Bill de Blasio.  This one-time POTUS candidate flamed out so many times they’ve named a meteor shower after him.  No candidate in U.S. history has ever crashed and burned like Bill.  That’s why he spent his extraordinarily short campaign season wearing a parachute instead the usual schmooze attire.  By the way, not only is de Blasio still destroying the Big Apple one bite at a time, he’s was dead set on morphing the entire country into a cultural marxist paradise. Here’s how it all began for this communist: Meet the real Bill de Blasio a la revolución! Oh, and does anyone know that Bill de Blasio was really named Warren Wilhelm Jr. (“During the 1950s, at the height of the Red Scare, both Maria and Warren Wilhelm [Bill’s parents] were accused of having a sympathetic interest in Communism”.)[1]