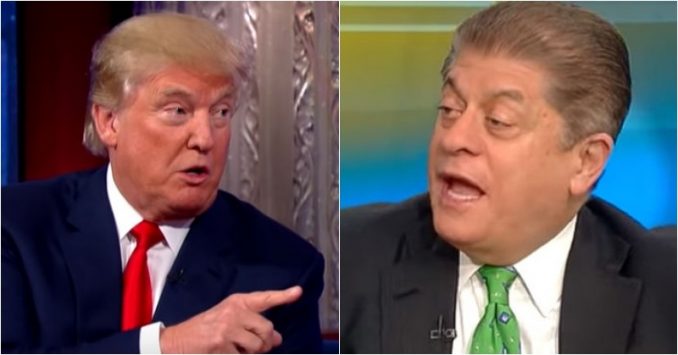 Fox News legal analyst Judge Andrew Napolitano, who of late has been the poster child for the increasingly leftward tilt of the network touted as “fair and balanced,” and who believes that President Trump is guilty of colluding with the Russians to affect the 2016 election and of pressuring Ukraine to investigate a political opponent, insists that the inquiry by Rep. Adam Schiff is perfectly legal because there is no requirement in law that a vote to conduct such an inquiry be taken. As he states in an article in the Daily Herald:

The due process Trump seeks — notice, hearing, fairness, counsel, cross-examination, confrontation, neutral judges — is only relevant during a trial.  The House does not conduct trials; the Senate does.  There and only there — if we get there — will the president have his due process rights.

But, as Napolitano himself notes, the House has rules, and one of those rules says that in the absence of a clear legal guideline, House precedent should be honored.  The House may not have trials, but it is capable of witch hunts and inquisitions.  President Trump is entitled under House precedent to the same process, including due process, that Richard Nixon and Bill Clinton got.  Until the impeachment inquiry against President Trump, the House honored the tradition of relying on precedent as a guarantor of fairness:

Little has changed in the House in terms of the process for impeachment.  A guide to the process is House Practice: A Guide to the Rules, Precedents and Procedures of the House.  As this guide explains, “Under the modern practice, an impeachment is normally instituted by the House by the adoption of a resolution calling for a committee investigation of charges against the officer in question.” (p. 614)

Although the Senate is more known for precedent, the House also relies on precedent to conduct business.  There are different sources for precedent.  One of those sources is Deschler’s Precedents, authored by the first House parliamentarian, Lewis Deschler.  In Chapter 14, Section 6, Deschler’s Precedents discusses the impeachment process in great detail, including the precedent for an authorizing resolution for an impeachment proceeding.

The Constitution gives the power of impeachment to the House of Representatives as a body and not just to the House Intelligence Committee of Adam Schiff, who has colluded with an alleged Ukraine whistleblower. Also in violation of House precedent is the fact that the House Judiciary Committee, which should have jurisdiction, has been written out of the process.  Schiff’s record of manipulation and deceit in this impeachment discussion and its purely political motivation has been well documented.

And at least in the cases of Nixon and Clinton, we had real crimes as a predicate: the Watergate break-in and cover-up and Clinton’s lying under oath in a legal proceedings.  This inquiry is based on no actual crime despite Napolitano’s false claim in the Daily Herald:

The president refused to deliver congressionally authorized and ordered military and financial aid to an ally threatened with Russian invasion until the ally’s government performed a presidentially requested favor for his reelection campaign — a favor that is unlawful to ask for.  Is it an impeachable offense?

Under the Constitution, it is if the House says it is.

Except the president did no such thing.  Both President Trump and Ukrainian president Zelensky say there was no pressure and no quid pro quo.  We have only the hearsay and public source “evidence” from a whistleblower who was not in the room or on the call, coupled with the Schiff lie told on national television — the made-up version of the call that Napolitano apparently has swallowed whole.

The Founding Fathers intended impeachment for real high crimes and misdemeanors — not for policy differences or whatever the House says it is.  And we have here the rankest of hypocrisy, with the House demanding public release of an unredacted Mueller report and even grand jury testimony in the Russia “collusion delusion” probe while claiming the right to secrecy regarding Ukraine testimony.  Schiff says he doesn’t want witnesses to be able to compare notes or make things up.  As he has?

Articles of impeachment must be voted on by the full House.  The Senate cannot conduct an impeachment trial based on the secret proceedings of Schiff’s House Intelligence Committee.  Even Schiff’s inquiry was not authorized by the House.  It was decreed by one person — House Speaker Nancy Pelosi. In fact, impeachment has twice been considered by the House and rejected or tabled by the House.  As noted by FreedomWorks:

On July 17, Rep. Al Green (D-Texas) introduced articles of impeachment, H.Res. 498.  A motion could have been made to refer H.Res 498 to the Judiciary Committee rather than it be tabled by the House.  Such a motion, however, was not made.  Instead, the resolution, on the same day, was tabled by a vote of 332 to 95.

Rep. Rashida Tlaib (D-Mich.) has introduced a resolution, H.Res. 257, to authorize an impeachment inquiry.  H.Res. 257 is not privileged and has been referred to the House Rules Committee.

So concerned are the Democrats about our democracy, our Constitution, and alleged presidential “abuse of power” that they are unwilling to vote on anything that requires accountability to the voters.  The Democrats are saying to the voters who elected Trump that their votes are illegitimate. They are to be disenfranchised and the president they elected removed.

In February 1974, the House passed H.Res. 803, which authorized the committee to investigate whether there were grounds to impeach President Richard Nixon. H.Res. 803 established the parameters for the impeachment inquiry, such as subpoenas of information and the examination of witnesses. …

In October 1998, the House passed H.Res. 581 to authorize an impeachment inquiry against President Bill Clinton.  Like the resolution passed in 1974, H.Res. 581 established the process by which the committee would carry out the inquiry and authorized the committee to produce articles of impeachment.

This has been the precedent established by the House, precedent being ignored as President Trump is, in effect, being impeached by just two people — Speaker Pelosi and Rep. Schiff.