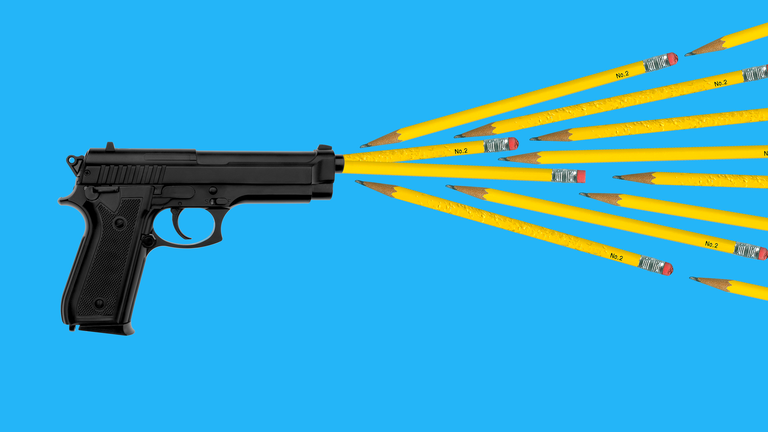 by Jose Nino via Mises Wire

In this video, Booker proclaimed that “It is time for us as a nation not to normalize the violence and the carnage of gun violence. It is time that we come together and stand together and take the fight to the NRA and the corporate gun lobby like we have never seen before!”

Ramos sees the Booker campaign as a viable avenue to bring gun control into the national conversation. He asserted that “Booker wants to be the Gun Control President. He’s even introduced a sweeping gun violence prevention package that would close loopholes for gun sales, crack down on gun manufacturers, and invest in communities impacted by gun violence.”

What Ramos is referring to is Booker’s gun control package which has become a staple of his presidential run. The New Jersey Senator’s affinity for gun control make sense based on how he represents New Jersey, a state with some of the strictest gun laws on the books. New Jersey finds itself ranked 50th according to Guns & Ammomagazine for states most friendly towards gun owners.

It’s rather ironic that Jorge Ramos is calling for gun control when taking into account his Mexican origin. For a journalist like Ramos, who claims to be the voice of Latin American interests in American media, it would behoove him to recognize Latin America’s crime problems. Violence is especially pronounced in countries like Mexico, and how gun control has played a role in keeping crime rates high.

Instead of turning to cliché solutions such as more education, foreign aid, and accountability, Ramos and his ilk should consider alternatives such as gun rights which empower Latin American citizens to confront criminal threats.

By just glancing at Latin America’s current gun policies, we see a region that is in desperate need of more pro-gun laws. Countries like Brazil, Mexico, and Venezuela offer lurid accounts of what happens when most of the population is effectively disarmed when facing real criminal threats.

Lush beaches and vibrant sports culture aside, Brazil has some of the most violent cities in the planet. According to the Citizen’s Council for Public Security and Criminal Justice (CCSPJP), 19 of them are in its top 50 most violent cities in the world rankings. Brazil’s historically high crime rates have motivated Brazil’s political class to do something. And by doing something, they’ve opted to pass over a dozen pieces of gun control regulations since the 1990s.

Just to own a firearm, Brazilians must be 25 years old, possess a gun license, pay registration fees, and pass an exhaustive background check. Before 2004, only 3.5 percent of Brazilians legally possessed firearms, largely due to the country’s gun control regime. Even with this gun control on the books, crime rates continued to rise . In 2017, Brazil had a homicide rate of 30.8 homicides per 100,000 people.

The good news is that the election of Jair Bolsonaro has witnessed a change in gun policy with Bolsonaro loosening up certain restrictions to allow more law-abiding citizens to acquire firearms for self-defense.

A close look across the Southern border should also demonstrate the futility of gun control in battling crime. Like Brazil, Mexico has some of the toughest gun control laws in the region.

Mexico only has one gun store in the country, located in its capital. As a result, law-abiding citizens have few options for self-defense. Prospective gun owners are required to submit references and demonstrate that they earned their income legally. On top of that, they must be photographed and fingerprinted.

Despite all this red tape, Mexican criminals can acquire firearms with ease. Thanks to this disparity in gun ownership, law-abiding Mexicans have suffered at the hands of powerful drug cartels and other criminal elements. According to The Sun, 94 homicides take place on a daily basis in Mexico.

Venezuela seems to be in the news all these days due to its economic collapse. And for good reason. Hugo Chávez and Nicolás Maduro’s socialist policies have demolished the Venezuelan economy and torn apart the country’s social fabric.

Consequently, Venezuela has 10 of Latin America’s most violent cities according to CCSPJP’s ranking. The capital of Caracas is usually at the top of this list.

Historically speaking, Venezuela has never had much of anything resembling a Second Amendment. Nevertheless, Chávez and his successor’s regimes have effectively destroyed legal private ownership of guns.

Given these high crime rates and the Venezuelan government’s recent calls to deploy armed militia members, carrying weapons for self-defense is a matter of survival for many Venezuelans.

Although the U.S. has work to do in restoring gun rights, Americans take their right to self-defense for granted when we look at other countries like Mexico, which have prohibitive gun restrictions in comparison. Gun control laws only keep the law-abiding from defending themselves against criminals. If we’re being honest, these types of laws should be viewed as criminal empowerment schemes. No amount of virtue signaling, or demagoguery will change that.