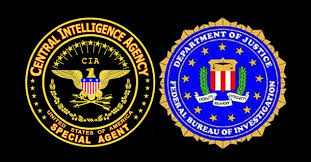 I was the CIA Director. We lied. We cheated. We stole. [Laughter, applause] We had entire training courses. [Applause]. It reminds you of the glory of the American experiment.”1 – Mike Pompeo, 15 April 2019

“The Democrats and their FBI Gestapo have brought Nazism to America. There is a revolution underway that is creating a situation for you that is far worse than life in the Third Reich.”2 – Dr Paul Craig Roberts, 6 January 2023

The CIA (Central Intelligence Agency) and the FBI (Federal Bureau of Investigation) are the two most notorious of several acronym-named institutions which are nowhere mentioned in the Constitution of the United States of America.

The CIA was established by President Truman under the National Security Act of 1947 to assist in countering the then Soviet threat. Its main purpose was to collect, evaluate and disseminate vital information on economic, military, scientific and other developments abroad in order to safeguard national security, but it developed by stealth into what Ron Unz calls “the gangster enforcement arm of the oligarchy that rules America and its mainstream media”,3 eventually assuming a role parallel to “the secret American Army” akin to the Gestapo (Geheime Staatspolizei), Hitler’s Secret State Police.

Today the CIA is busily eviscerating the US Constitution and has criminalised peaceful public dissent and free speech.4 The Natural News website provides evidence that on the international front the CIA is running Ukraine’s war against Russia,5 that it is using the pro-vaccine corporate media as a criminal conspiracy to promote the Covid-19 scam,6 that it conducted secret torture operations and assassinations,7 and that it uses Google as its “information dominance” front.8

The FBI was also subjected to a transformation similar to the CIA’s.

Originally known as simply the ‘Bureau of Investigation’, the FBI was created on 26 July 1908 by the then Attorney General Charles J Bonaparte, grandson of Napoleon’s brother, despite objections by some members of Congress.

It was intended to be the investigative arm of the US Department of Justice and was a fact-finding agency responsible for all Federal criminal statutes except those delegated to other Federal agencies.

It since morphed in stages into America’s domestic “Surveillance State”, which it led, together with the Director of National Intelligence (ODNI) and the CIA, to “run roughshod over tech companies”, placing staff agents at Twitter and other key tech companies in order to influence censorship policy”.9 Like the CIA, the FBI is thus rightly accused of “Gestapo tactics”.10 As early as 12 May 1945 President Harry Truman already wrote of it: “We want no Gestapo or Secret Police. FBI is tending in that direction. […] The Courts should be strictly judicial and not dabble in policy – except interpretation of the Constitution.”11 Today the majority of Americans consider the use of the FBI as “Biden’s personal Gestapo”.12 The Russia Today website calls the FBI a “jackbooted Gestapo”, “criminal” and “rotted at its core”.13 The Natural News website put it bluntly: “The FBI overthrew America.”14

WikiLeaks has exposed the CIA

On 14 March 2017 WikiLeaks released thousands more documents and files revealing the “entire hacking capacity of the CIA”. Even the first one percent of the batch, known as “Vault 7”, contains over 8,000 pages and already reveals that the CIA, which fabricated stories of Russian hacking of US and EU elections with zero proof, was itself hypocritically spying on the entire world, including American politicians, businesses and individuals. It describes the CIA as “a hotbed of corruption and espionage”.

The Vault 7 documents also disclose that the CIA purchases software exploits from other intelligence agencies, including Britain’s MI5. For years the West and its subservient mainstream media, backed by the CIA, the White House, the State Department, and the sixteen other US intelligence agencies, have been doing their utmost to demonize Russian President Vladimir Putin with hysterical and emotional accusations based on absolute fiction. WikiLeaks exposed the CIA for hypocrisy in doing precisely what the CIA itself has been accusing others of doing.

Vault 7 describes the CIA as not only “illegal”, but also “incompetent”. The CIA is legally prohibited from conducting electronic surveillance on Americans. Its activities are supposed to be subject to rigorous oversight to ensure that they comply fully with US law and the Constitution. Nevertheless, it has consistently breached its legal brief and violated the separation of powers principle embodied in the US Constitution. Itsincompetence surfaced when it actually lost its arsenal of hacking tools, resulting in a call for an immediate Congressional investigation into itshacking activities, which for obvious reasons apparently never took place.

On 4 May 2012 former CIA Director William Casey also admitted its involvement in a campaign of deliberate lies: “We’ll know our disinformation program is complete when everything the American public believes is false.”15

That is largely the situation today. Recent revelations also prove that the CIA was involved in the assassination of President Kennedy and illegally tapped the Trump election campaign in 2016.16

FBI ‘weaponised against the people’

“We now have proof that the FBI has been acting as the key instigator and implementer of the Government’s illegal censorship of Americans. The FBI has also actively interfered in multiple elections – all while inventing the narrative that foreign nations were interfering. Twitter has worked hand in hand with the US Department of Defence to aid US intelligence agencies in their efforts to influence foreign governments using fake news, computerized deep-fake videos and bots.”17

Judging by the documentation obtained through a recent lawsuit against the White House and the Twitter files released by Elon Musk it has become clear, says Musk, that: