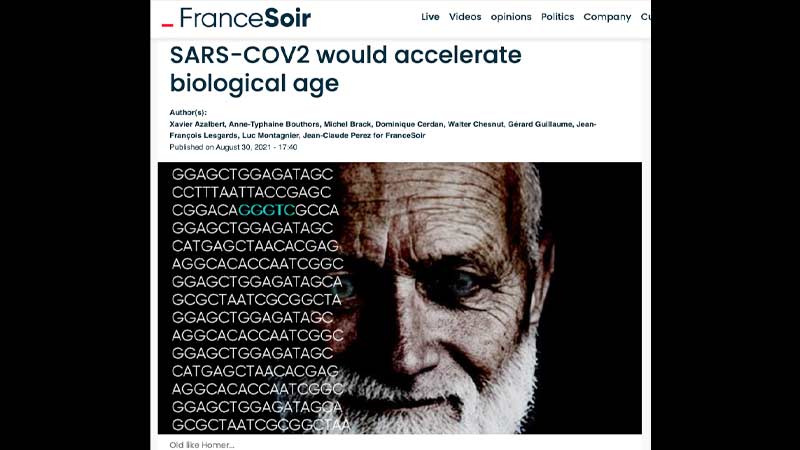 ‘I believe the Spike Protein is acting as a Progeria Drug – delivered via the Endothelium to all organs,’ explains researcher Walter M. Chesnut.

Spike proteins associated with the Covid-19 virus and mRNA vaccines could be causing accelerated degradation of cells in the human body, causing organs to biologically age more rapidly and bring on early death.

The frightening hypothesis was put forth by French researchers, who concluded spike proteins induced by Covid infections and mRNA jabs shorten DNA sequences known as telomeres, which protect the ends of chromosomes, thereby decreasing life expectancy.

In an August 2021 article published in French newspaper France Soir, the researchers highlighted a Chinese study showing spike proteins impaired endothelial function in guinea pigs, which was then replicated with human cells.

The French researchers logically went on to question whether spike proteins induced by mRNA jabs could have similar effects.

“If it is proven that SARS-CoV2 induces accelerated cellular aging, and that the responsible for this senescence is none other than the Spike protein, how can we be absolutely certain that the vaccines currently on the market, all based on Spike, do not also lead to the accelerated degradation of the cells of vaccinated persons?” the scientists asked.

The paper, co-authored by Nobel Prize laureate and virologist Luc Montagnier, delves into a rash of studies showing the effects of Covid infections on telomeres and how shorter telomeres are linked to the acceleration of cellular biological aging.

The article also explains how oxidative stress – which occurs in the body at inflammation sites – plays a role in telomere shortening, and how Covid-19 vaccines can induce oxidative stress, which in turn negatively affects DNA and RNA building blocks known as guanines.