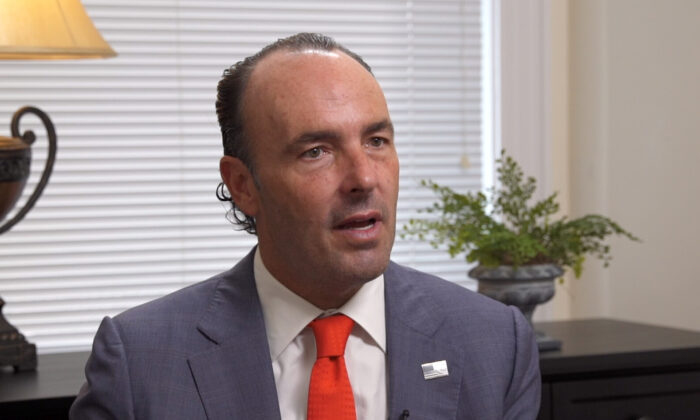 China, a nation accustomed to greater than 7 percent real GDP growth for the past 10 years, is seeing signs of economic sluggishness. “The volume of exports could actually shrink by 6 percent on average in 2022 and 2023,” predicted the BlackRock Investment Institute in an October report.

Bass, founder of the asset management firm Hayman Capital and prominent China hawk, claimed the Chinese are in a financial conundrum of their own making. “They have architectural problems,” the fund manager said in a Dec. 17 interview on the podcast Forward Guidance.

Blaming the Chinese Communist Party’s (CCP) incentives and monetary policies for creating an environment of “riverboat gambling in their property sector,” Bass warned of real estate’s burgeoning share of Chinese GDP. Estimates of the property market’s share in the nation’s economy vary, but economist and Harvard professor Kenneth Rogoff estimated it to be around 30 percent, as of September 2021.

The growth of the property sector has ushered in an unprecedented drop in housing affordability.

Last year, according to Bass, the median home price-to-income ratio in tier-one Chinese cities exceeded 36—meaning it would take more than three decades for the working class to accumulate the necessary income to purchase a home. The fund manager juxtaposed these figures to those of the U.S. housing bubble in 2008.

“Just to put these into perspective, in the United States, median home prices got to be just over six times median income when our subprime crisis collapsed.”

Despite its lofty heights, the Chinese property is cooling off. National home prices have declined for the preceding 16 months, according to data from the National Bureau of Statistics in China.

Property developers are feeling the sting. S&P Global Ratings estimated in September that the Chinese real estate market needs a bailout of almost $100 billion to ensure projects can continue.

“What Xi figured out is the average birth rate of the average Chinese woman has dropped from over 2.1 to now 1.2,” the fund manager explained. Bass connected birth rates to house prices by pointing out that home ownership is essential to family formation.

“They can’t marry in the basement of their parent’s house, so they don’t,” he added. “The birth rate started collapsing, and we all know the demographic curve of China looks terrible because of the one-child policy, but this supercharged the problem.”

The “one-child policy” refers to China’s population curbing initiative, implemented in 1980 by former Chinese leader Deng Xiaopeng, which punished parents for having more than one child. The policy drastically reduced the country’s younger population, led to a stark gender imbalance, and was repealed in 2015.

According to Bass, Xi recognizes the severity of China’s demographic problem and has decided to reverse the trend at all costs.

“Xi decided to squash real estate. He knows it has to come down and stay down.”

The Texan fund manager has long been sounding the alarm about the communist regime’s plans to invade Taiwan and has warned western capital allocators to divest from China while they still can. Such an invasion is a matter of “when” not “if,” as Bass sees it.

“If you listen to Xi … He is battening down the hatches,” Bass said in the interview. “There’s no question that he moves on Taiwan.”

Bass sits on the board of the Quadrilateral Security Dialogue (Quad) fund, a newly launched investment fund founded by insiders from Washington, Australia, Japan, and India. The goal of Quad is to advance initiatives that give the West competitive advantages over China.

If China were to invade Taiwan, Bass believes the United States should not hold any punches, specifically advocating for their removal from the SWIFT system—a move taken against several Russian banks earlier this year. “We can collapse their economy in a matter of months or maybe even weeks,” the fund manager said.

Some economists disagree that the United States has the upper hand in an all-out trade war scenario as they believe Beijing can weaponize its U.S. Treasury bonds by dumping them. China owns just over $900 billion in U.S. Treasury bonds as of October, according to data from the Treasury Department.

However, Bass believes China cannot sell bonds all at once, since doing so would cause economic distress for Beijing.

“You need dollars running your economy … 86 percent of their settlements are in dollars, so they desperately need dollars to deal with the rest of the world,” Bass said.