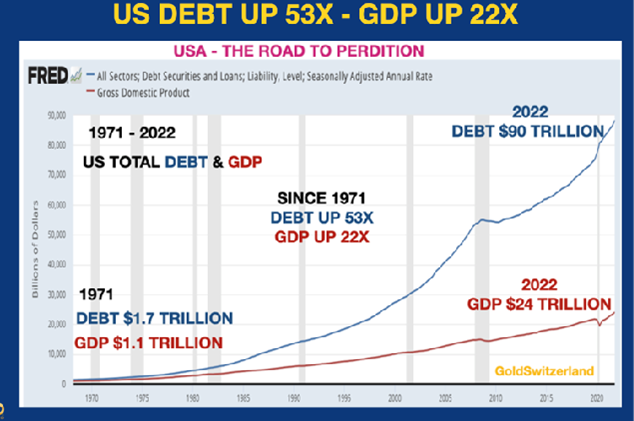 With US and Global debt exploding prior to both assets and debt imploding, let us look at the disastrous consequences for the US and the world.

Debt explosion leading to the currency becoming worthless has happened in history for as long as there has been some form of money whether we talk about 3rd century Rome, 18th century France or 20th century Weimar Republic and many many more.

So here we are again, another monetary era and another guaranteed collapse as von Mises said:

This disastrous borrowed prosperity, with ZERO ability to repay the surging debt,  will lead to one of the three consequences below:

3. BOTH OF THE ABOVE

The most likely outcome is number 3 in my view. The dollar will go to ZERO and the US will default. The same will happen to most countries.

I outline the consequences for the world at the end of his article.

Many people say that the US can never default. That is of course absolute nonsense.

If a country prints worthless debt that nobody will buy in a currency that no one wants to hold, the country has definitely defaulted whatever spin they put on it.

In the next few years, not just US but all sovereign debt will only have one buyer which is the country that issues the debt. And every time a sovereign state buys its own debt, it has to issue more worthless debt that nobody will touch with a barge pole.

Printing more money to pay for previous sins has never worked and never will.

And this is how money dies, just like it has throughout history.

The current monetary era started with the foundation of the Fed in 1913 and the acceleration of debt and currency debasement since 1971 when Nixon closed the gold window. With just over 100 years into this era, it is now approaching the end, like they all do.

Global currencies are already down 97-99% since 1971 and we can now expect the final 1-3% decline for all money to become virtually worthless. This is of course nothing new in history since every single currency has always gone to ZERO. We must of course remember that the final 1-3% move means a 100% fall from today. The final collapse is always the quickest so it could easily happen in the next 2-5 years.

Let’s look at how it has all evolved.

Although US debt has increased virtually every year since 1930, the acceleration started in the late 1960s and 1970s. With gold backing the dollar and therefore most currencies UNTIL 1971, the ability to borrow more money was restricted without depleting the gold reserves.

Since the gold standard prevented Nixon to print money and buy votes to stay in power, he conveniently got rid of those shackles “temporarily” as he declared on August 15, 1971. Politicians don’t change. Powell and Lagarde recently called the increase in inflation “transitory” but in spite of their bogus prediction, inflation has continued to rise.

As the widening Gap between Debt and GDP in the graph above shows, it now takes ever more debt to achieve increases in GDP.  So without printing worthless money, REAL GDP would show a decline.

So this is what our politicians are doing, buying votes and creating fake growth through printed money. This gives the voter the illusion of  increased income and wealth. Sadly he doesn’t grasp that the illusory increase in living standard is all based on debt and devalued money.

Since Reagan became president in 1981, US federal debt has on average doubled every 8 years. Thus when Trump inherited the $20 trillion debt from Obama in 2017, I forecast that the debt would double by 2025 to $40t. That still looks like a valid projection but with the economic problems I expect, a $50t debt by 2025-6 cannot be excluded.

So presidents know they can buy the love of the people by running chronic deficits and printing money to make up for the difference.

How can any sane person believe that with debt going up 4.5X faster than tax revenue that the debt can ever be repaid.

Even worse, with US interest payments on the debt surging from around 0% to probably 5% by 2025 the interest on the debt will climb to $2 trillion or circa 30% of the annual budget.

So with higher interest rates, higher deficits and rising inflation the scene is set for a high or hyper-inflationary period in the next few years

So virtually every observer believes that the Fed (and ECB) will not just stop raising interest rates but pivot and lower them again.

In my view this will not happen except for possibly very short term. The 40 year interest rate downtrend finished in 2020 and the world is unlikely to see low or negative rates for many years or decades.  High inflation and high rates will continue for years. But as we see in the 40 year chart of the 10 year US treasury below, there will be many corrections in the coming uptrend.