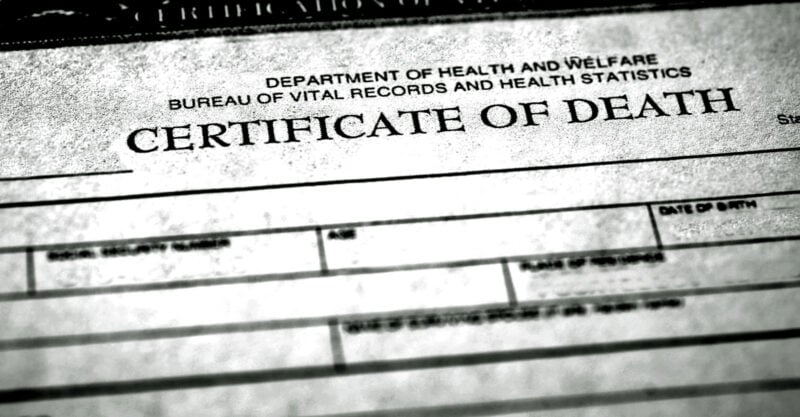 After analyzing more than seven years of Massachusetts death certificates, independent investigator John Beaudoin, Sr., uncovered evidence that thousands of deaths in 2021 may have been linked to COVID-19 vaccines.

In this article, I highlight the work of independent investigator John Beaudoin, Sr., who analyzed nearly seven years of Massachusetts death certificates he obtained through a Freedom of Information Act (FOIA) request.

There is no reasonable way to explain how SARS-CoV-2 dramatically changed the way it attacks and kills human beings and why it did so at precisely the time the experimental mRNA inoculations were deployed.

Beaudoin’s analysis also suggests that medical fraud and negligence may have been in play on a scale yet to be definitively determined.

Massachusetts: a center of COVID controversy

Beaudoin is a fellow resident of Massachusetts. Just down the road from us sit some of the most renowned hospitals and centers for medical research. None seem interested in validating or refuting the devastating implications of Beaudoin’s findings.

Boston was home to the infamous Biogen conference held in March 2020. The event was considered to be one of the first “super spreader events” in the country.

In the summer of 2021, an outbreak of COVID-19 in Massachusetts’ Barnstable County forced the Centers for Disease Control and Prevention to acknowledge that the injectable mRNA therapies were worthless.

In other words, there was no evidence that the vaccine offered any protection against infection.

Of those who were hospitalized in this outbreak, 80% were fully vaccinated. The “vaccines” offered no protection against severe disease.

Furthermore, vaccination status had no bearing on the viral load of those who got sick. Because viral load is correlated with infectiousness, the vaccine did not offer any reduction in transmissibility.

In one of its first real-world tests, the rapidly developed, tested and deployed therapy failed completely on all counts.

Massachusetts researchers can’t seem to move on from mask mandates

Earlier this month, a study published in the New England Journal of Medicine (NEJM) found there was an increase in COVID-19 cases in Massachusetts school districts that lifted their mask mandates.

According to the authors, school districts with mask mandates had 39.9 fewer cases per 1,000 students over a 15-week period.

I wish to pose a simple question to the dutiful scientists down the road: so what?

Although districts that continued to enforce mask mandates after the statewide mandate was dropped had a lower COVID-19 incidence rate, mask mandates did not eliminate the transmission of the disease. Those districts still had 60 cases per 1,000 students.

The NEJM authors also proved that COVID-19 is transmissible whether or not masking precautions are implemented.

Children are going to get COVID-19 whether they are forced to wear a mask or not. There is no longer a need to “flatten the curve” until a miracle “vaccine” can be developed at “warp speed.”

COVID-19 is a disease that will be with us for the foreseeable future. What is the point of such a study? To convince Massachusetts residents that a modest decrease in school days missed is worth the imposition of perpetual mask mandates upon their children?

The ‘Big Story’ in Massachusetts

While the NEJM researchers were busy tabulating COVID-19 infection rates in different school districts during the first part of 2022, a far more important story was unfolding in Massachusetts.

Through a FOIA request made to the state’s department of public records, Beaudoin, an electrical engineer, obtained access to every death certificate in the state of Massachusetts between 2015 and September 2022.

His investigation into these records paints a disquieting picture of how the COVID-19 “vaccine” likely devastated the health of Massachusetts residents.

Beaudoin’s analysis is detailed and rigorous and stands as an example of why a medical degree or an academic appointment is not required to uncover explosive evidence.

In fact, those kinds of credentials can often be impediments rather than assets. There is no excuse why the Massachusetts Department of Public Health has not done the analysis Beaudoin chose to do himself.

For the purposes of this article, I will focus on the summary points. A deeper dive can be found on Mathew Crawford’s “Rounding The Earth” podcast or in Beaudoin’s own Substack, which he writes under the name “Coquin de Chien.”

Below is a plot of the raw numbers of daily deaths (confirmed by death certificates) over time for the years 2015-2021 overlayed:

The takeaway is impossible to miss. The rise and fall of daily deaths over a 10-week period in the early-to-late spring of 2020 is representative of a non-immune population encountering an infectious and virulent pathogen for the first time. This bump in the black line was from the casualties of the first wave of SARS-CoV-2 infections in Massachusetts.

Whether or not the state was still in the throes of a pandemic emergency beyond the first few weeks of June 2020 is debatable because it is quite clear that daily deaths quickly returned to baseline and stayed there until the autumn — when a far less lethal second wave hit the state. Recall that Emergency Use Authorization (EUA) stipulates that a public emergency is required before any mitigating therapy can obtain EUA.

The rapid rise and fall of deaths in Massachusetts in early 2020 is unmistakable, but who died? Beaudoin answers this question here: