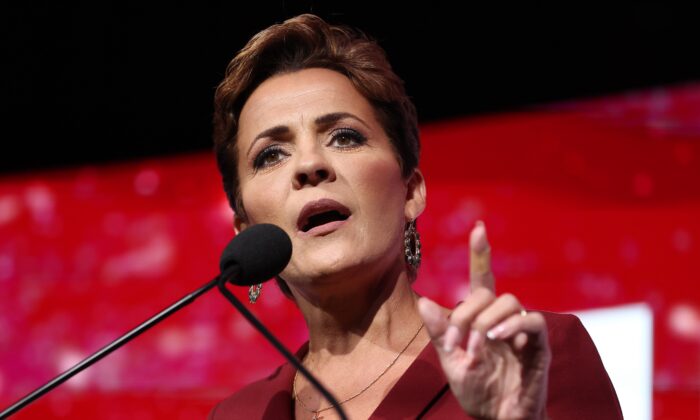 “Attorneys are working diligently to gather information,” said Lake, a former local news anchor who was backed by former President Donald Trump. “Whistleblowers are coming forward and the curtain is being lifted. Whether done accidentally or intentionally. It is clear that this election was a debacle that destroyed any trust in our elections.”

Authorities Maricopa County are, according to Lake, “still counting ballots” after “printer problems, tabulation errors, three-hour-long lines and even longer and confusing instructions given by election officials made this election day the most chaotic in Arizona’s history.”

For the past several days, Lake has been posting videos of voters complaining about their experiences during Election Day to her Twitter page.  She’s said that Republican voters were disenfranchised when they tried to cast ballots in Maricopa County, the state’s most populous county.

Officials in Maricopa County said on Nov. 8 there were problems with vote-tabulation machines and asked voters to drop their ballots inside dropboxes. Later that day, Maricopa County Board of Supervisors Chairman Bill Gates and county Recorder Stephen Richer blamed an issue with printers for the problem and later said that the glitch would not stop anyone from voting.

Over the weekend, Arizona Attorney General Mark Brnovich’s office sent a letter asking Maricopa County for answers about the apparent voting problems. The memo said that it has fielded hundreds of complaints about how authorities conducted the election during the in-person voting phase.

“These complaints go beyond pure speculation, but include first-hand witness accounts that raise concerns regarding Maricopa’s lawful compliance with Arizona election law,” the letter said, asking for a response before Nov. 28. Gates, in an interview with local media, said his office would comply.

“We’re reviewing this with our attorneys right now and I don’t have anything further to say at this point, but we will certainly before we hold the canvass,” he told KTAR on Monday.

Gates stated that around 70 of the county’s 223 vote centers suffered problems on Nov. 8. Technicians were able to solve the problem by the same afternoon, he remarked.

The letter said that Maricopa needs to provide a “full report” for the “myriad problems that occurred in relation to Maricopa County’s administration of the 2022 General Election.”

Last week, Democrat gubernatorial candidate Katie Hobbs, the Arizona secretary of state and chief election official, declared victory. Lake has not conceded yet and it appears that she will not do so anytime soon, according to her video.

“Arizonans who choose to make their voice heard on election day should not be disenfranchised or punished for choosing to vote in person,” Lake said Monday. “Yet they were I want you to know Arizona. I will continue fighting until we restore confidence and faith in our elections.”

And Lake, in reacting to the attorney general’s recent letter to Maricopa County, told the Daily Mail on Sunday she still believes “I will become governor, and we are going to restore honesty to our elections.”

“Our job is to find the people who are, whether they’re Democrat, independent, Republican … that reflect Arizona, reflect the diversity of Arizona, and can help deal with some of the challenges that the administration will face,” Hobbs spokesman Mike Haener told local media.