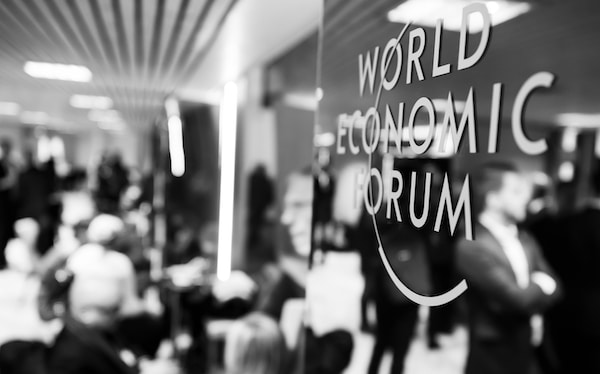 What do you make of the WEF and the power it wields?

Doug Casey: “International organization for public-private cooperation” is a code phrase for economic fascism—which is to say, the hand-in-glove melding of the political power of the State with the economic power of corporations.

Things like the WEF, and other NGOs (non-governmental organizations), institutes, and think tanks, have proliferated in recent years. They’re almost all destructive parasites on productive society.

Almost all of them are leftist, statist, and collectivist in orientation. They’re typically populated by intellectuals and academics and funded by tax-exempt foundations, usually set up by elderly do-gooders interested in leaving a “legacy.”

The WEF is by far the most successful of the breed. Instead of just cadging donations so intellectuals could hang around and seem prestigious, in 1971, Klaus Schwab formed a club where the rich and powerful could discuss ideas with other members of the overlord class. Political and financial types could find a philosophical home, disguising the quest for money and power with a patina of benevolence. It’s become an amazingly large and powerful organization. They have roughly 800 full-time employees, most of them very highly paid. They have an annual budget of over $300 million. Their balance sheet indicates that the WEF is worth over $1 billion, funded by major corporations who give it millions of dollars, as do various governments. Most of the world’s political leaders and corporations are members.

Schwab was very clever to have put together an organization where the richest, most powerful, and most influential people in the world are charged huge amounts to be introduced to each other and talk about how they can become even richer, more powerful, and more influential.

It seems clear that members of the WEF have to toe the party line or be disinvited. Nobody wants to be excommunicated from the WEF or cut off from association with other rich and powerful people. It’s safe to say that WEF members share a common philosophy, one that’s in line with Schwab’s weltanschauung.

FWIW, I think it’s wrong for public corporations to make political, charitable, or indeed any kind of contributions. A corporation’s raison d’etre is to generate money for its shareholders, not allow management to play big shot. Managements often like to give away shareholders’ money; it costs them nothing, but they reap the prestige of giving. Better that the money be distributed to shareholders so they can dispose of it as they wish. If that were the case, outfits like the WEF would have a lot less money and power. And wouldn’t be in a position to promote the pernicious ideas it does.

For instance, it would appear that Klaus Schwab actually originated, or at least popularized, the term “stakeholder.” Stakeholderism believes that business is obligated to treat employees, customers, local residents, and anyone who claims to be affected by business as if they had some right to what a company produces. People who identify as stakeholders easily develop into mooches and leeches. Schwab was also an early supporter of the ESG (Environmental, Social, and Governance) and DEI (Diversity, Equity, and Inclusion) movements. And political correctness in general.

With as much money, power, and influence as the WEF has, it’s easy for them to groom up-and-comers. They created several sub-organizations for people who are under 40 years old—where they can reinforce their beliefs that the world ought to go in a certain way—under the direction of WEF-type people.

Schwab has to be complimented for having built the WEF from nothing and making himself one of the most powerful people in the world. But the WEF is a dangerous and despicable organization. It’s basically what’s known as a self-licking ice cream cone—it serves no useful purpose but to perpetuate itself and its members.

International Man: Yuval Noah Harari is a key adviser to the WEF.

He has risen to fame as reviewers and editors have anointed him as a public intellectual.

What’s your take on the rise of Harari?

Doug Casey: Harari is a perfect example of how, when an organization like the WEF gets in the back of somebody, they can make him rich, famous, and influential. These people all feed each other and scratch each other’s backs.

Harari apparently came from a perfectly average middle-class Israeli family, but I would think that he’s got to be worth at least $50 million, just based upon sales of 30 million copies of his books. He appears to be an ideal court intellectual, living quietly with his husband in a modest suburb of Tel Aviv, promoting the party line.

International Man: Harari has made several disturbing statements, including:

“Covid is critical because this is what convinces people to accept, to legitimize, total biometric surveillance.

We want to stop this pandemic. We need not just to monitor people, we need to monitor what is happening under their skin.

Governments want to know not just where we go or who we meet. Above all, they want to know what is happening under our skin.”

What do you think about this?

Doug Casey: Well, he really wants to transform the world, and it’s kind of clever the way he proposes to do it.

His book Sapiens, which I read about 10 years ago, is a competent enough summation of how humans evolved over the course of the Pleistocene during the last 2.5 million years. It doesn’t make any cosmic breakthroughs but tells a basically correct story. He explains how technology started to take on a life of its own and how we changed the world. And how technology’s now changing us at the rate of Moore’s Law. Fair enough.

The problem lies in his projections of how and where humans will evolve over the years to come. In particular, who will guide that evolution. And if things continue advancing at the rate that they are, it’s likely that machines will integrate with humans.

I see no problem with that. If you voluntarily want to replace body parts with mechanical parts—a new knee, a new heart, be a $6 Million Man—that’s wonderful. Taking it one step further, if you can put a chip in your brain and instantly access all the knowledge on the Internet without going through a computer, that could be even more wonderful, except for the fact the Social Credit System and hackers will have access to your chip.

The problem is that the WEF people think that they know what’s best for the rest of humanity. And they feel it’s for the good of all that they be closely monitored, controlled, and guided. They’ve made statements to the effect that most people are “useless eaters,” which is probably true at this point. Or it will be once everybody gets a Guaranteed Annual Income—enough to keep them sated with avocado toast and vanilla lattes while they watch cat videos at the local Starbucks. They’d really like to do without superfluous humans and just have the elite calling the shots. Humans that remain would amount to serfs. The WEF have said, “You’ll own nothing and be happy.” They’re very bold.

It’s very disturbing how they talk about guiding the advance to the next stage of human evolution. As pessimistic as I am about the current state of the world and where it’s going, I still believe in The Ascent of Man— but I believe it can only happen if individual liberty is maximized. From the point of view of personal freedom, Harari is actually talking about regressing to feudal times. Albeit a kinder and gentler version, where wise solons like Klaus and Yuval are in charge.

As far as I can tell, his values are antithetical to those of Western Civilization. But he’s an effective mouthpiece to convince the hoi polloi that their leaders have their best interests at heart. And I suppose they do. At least the way a farmer has the best interests of his dairy—or beef—cattle at heart.

International Man: Harari has often described a high-tech totalitarian future where a small elite with access to the latest technology evolves into different beings. At the same time, drugs and video games pacify the masses until their eventual extinction.

What are your thoughts about this dystopian future? Is it inevitable?

Doug Casey: Harari projects a certain inevitability to the evolution of technology, and he may actually be right.

I don’t mind change. Rapid technological progress has been accelerating for the last 10,000 years and, with a little luck, will go hyperbolic with the evolution of nanotechnology, computers, biotech, space exploration, robotics, and artificial intelligence. These are all good things.

The question is whether these things will be imposed upon humanity or will they be something that individuals can adopt or not as they choose? To me, this is the essential ethical and moral question.

Harari, and for that matter, the rest of these WEF people, never examine any ethical or moral issues.

For instance, Harari is very big on transgenderism, which he seems to want to make into a political hobby horse—where it’s not just accepted as a psychological aberration, but is almost imposed on society, whether you like it or not.