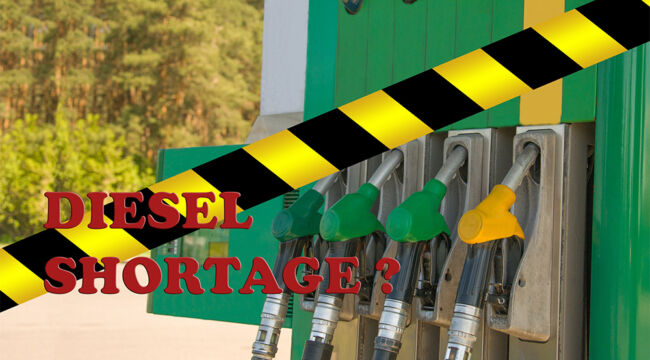 Higher fuel costs translate into higher costs for everything because trucks, trains, planes and cargo vessels all run on fuel (mostly diesel) so those higher fuel costs get passed along as higher prices for the goods being shipped including food.

The diesel shortage is especially alarming…

Unless you drive an old Volkswagen or Mercedes you’ve probably never put diesel fuel in your car. Cars are powered with gasoline, another distillate of crude oil. But practically everything else runs on diesel.

This includes trains, trucks and cargo vessels. That’s the backbone of the entire global transportation network.

When Chinese manufactured goods get to your local convenience store, they’ve arrived via container cargo ships that depart Ningbo (near Shanghai) and sail to the Port of Los Angeles. From there the containers are loaded onto special flatcars for trains or truck chassis.

They’re then carried by train or truck to distribution centers where they are placed on other trucks for the final journey to your local store.

In a nutshell, diesel fuel powers the transportation lanes that connect the global supply chain. Diesel powers a lot else including generators, heavy equipment, fishing fleets, recreational boats and more.

Without diesel the world would quickly grind to a halt more devastating than the worst of the pandemic panic in March 2020.

And right now, the U.S. is running out of diesel fuel.

The Best-Case Scenario — and the Worst Case

The U.S. typically has a 30-day supply of diesel that is continually topped up by new deliveries from oil refineries. Today that supply is under 25 days. Critically, the refineries can’t keep up with demand so the supply is dwindling by the day and cannot easily be replenished.

The refineries can’t increase output. Worse yet, some portion of U.S. refinery output is being shipped abroad by major oil companies in order to avoid shortages in Europe that are even worse than what’s emerging in the U.S.

Government officials are yelling at refinery operators to produce more but they cannot. The U.S. has not added any refinery capacity since 1977. Some refineries have even been closed recently.

There’s no inclination to invest in new refinery capacity because the Biden administration has threatened to destroy the U.S. oil and gas industry. Why invest in an industry that’s targeted for destruction by the White House?

This diesel shortage is coming to a head fast.

The best case is prices will skyrocket. That means the prices of all the goods carried on trains, trucks and vessels will skyrocket too because those higher transportation costs get passed along in the form of higher prices for the goods being exported.

The worst case is a gradual shutdown of transportation lanes, bare shelves in stores, food shortages and social unrest.

I Hate to Get Into Politics, But…

I don’t like to get into politics in this newsletter, but when they impact markets, I have no choice.

And let’s face it: From his first day on the job, Joe Biden has done everything possible to destroy the U.S. oil and natural gas industry including closing the Keystone XL pipeline, ending new oil and gas exploration leases on federal land, handicapping the fracking industry with new regulations and subsidizing inefficient alternative energy sources such as solar and wind turbines.

Just yesterday, Biden reaffirmed that he’s for “no more drilling.”

Biden has also drained the U.S. Strategic Petroleum Reserve of 130 million barrels of oil in recent months out of total capacity of 700 million barrels. The reserve is now at the lowest level since 1984.

All of that is in the books. The question is whether Biden can make things even worse. Of course, the answer is yes.

Biden is now blaming the oil industry for high prices caused by his policies and is threatening a so-called excess profits tax on oil company profits. Of course, Biden blames everyone for everything and never accepts responsibility for his disastrous policies. This is just one more example.

Again, one reason gas and diesel shortages are emerging is scarce refining capacity in the United States. Remember, no new refineries have been built in the U.S. since 1977 and some existing ones have been shut down recently.

Why should any major oil company invest anything in their own industry when Biden threatens to destroy the oil and gas industry on a regular basis?

Windfall profits taxes are nothing new. Jimmy Carter tried one in the late 1970s. Oil prices doubled. (That was after oil prices had already quadrupled in the mid-1970s). When you tax something you get less of it. It’s that simple. Biden’s windfall profits tax proposal will result in less oil and higher prices starting now. Get ready.