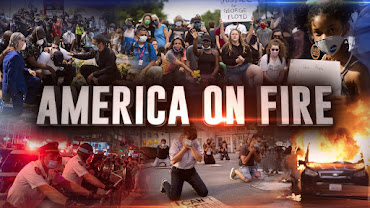 “History proves no elections ever stolen by the Communists are ever relinquished by them through the ballot box, but only through the cartridge box, leading to horrific and bloody civil wars! All Communist revolutions initiate armed conflict and in my opinion, the USA is undergoing a globalist funded takeover and takedown of our former God fearing Republic, orchestrated by Lucifer himself, the ultimate rebel.” Steve Quayle

While going to the bank this past Monday to deposit some of the checks mailed in as donations to ANP, I thought it incredibly strange that the bank teller, while entering the checks into their computer, turned to the bank manager and said one word about one of the checks: “Battleground.” With the bank manager standing quite far away from the teller, she asked “What?,” before the teller repeated the one word while holding a check from an ANP reader in Arizona: “Battleground.”

With that visit to the bank happening on Monday, November 7th, the day before the mid-term elections, and there being plenty of ‘battleground states‘ where Congressional seats and State Governorship’s were up for grabs, why should it matter to banks if a check is being deposited from a ‘battleground state,‘ unless ‘they’ have been told something that ‘We the American People’ haven’t been told?

And with that visit to the bank happening the DAY AFTER the Federal Reserve Bank in Washington DC for SOME strange reason decided to put up a 10′ wall around their location in the nation’s capitol, another hint of our banking system might be ready to completely implode, also take note this was all happening as the mainstream media was pushing ‘election day violence,‘ as if attempting to stir up the boiling pot, with msm outlets happy to blame ‘America’s racist history‘ despite the fact it’s largely been the left stirring up racial-political violence, mostly unreported by the MSM, for years and years now.

So ANP reached out to Steve Quayle and asked him if he had heard anything that would explain why a bank cashier would need to point out a check coming from an election battleground state to the bank manager and, after Steve reached out to contacts of his in the financial arena, as we’ll see in the answers he heard back, background intel circulating within that community is alarming, especially considering everything else now happening in America.:

1) Team Biden is prepared to shut down banking in ‘battleground states’ (or specific areas within states to FORCE a ‘Democratic answer’ if at all possible.) Team Biden assumes that if the flow of money is halted, then people will have to comply.

2) Bottom Line: War has been declared, even if the people have not yet been told. 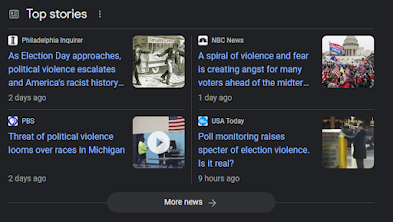 Yet with Democrats showing their total hypocrisy when it comes to human rights by carrying out a political purge upon Trump supporters who were protesting the Democrats 2020 election steal in Washington DC on January 6th while they were more than happy to spend 4 years of the Trump administration cheering as their favorite revolutionaries burned down America, what happens in the days, weeks and months ahead when, after stealing another election, they decide to carry out the kind of ‘Communist purge‘ they are famous for?

As seen in the screenshot above taken from a google search for ‘election day violence,’ the ‘globalists talking heads‘ were pushing it to the max even before the elections and with dementia-ridden Biden also pushing ‘election day violence’ and ‘standing up for democracy’ despite the fact it was Democrats that happily stole the 2020 elections and have long been using ‘big tech’ and their own political policies to attack the 1st Amendment in America and slowly but surely chip away at the US Constitution until there are no Rights for Americans remaining.

With tyranny nearby, thank GOD for the 2nd Amendment and 450 million+ guns owned by Americans!

Because as Steve Quayle also warned us, with Democrat-run cities and states now having skyrocketing crime and murder rates while Tuesday’s election steal will surely give them even bigger ideas, remember what numerous leftists have said about Conservatives recently about America being much better off with us dead. As Steve warns us, we may soon witness nothing less than the left’s version of their own ‘star chambers,’ with the ‘Mystery of Iniquity‘ playing out before our eyes.

“It was the left who started burning the West Coast cities down and the Democratic controlled cities that have the highest murder rates in the US with the Soros-funded prosecutors releasing the most violent criminals loose on the streets making for a culture of fear, or the no bail necessary crowd and leftist judges denying fair trials to white Conservatives especially, which is the modern day version of ‘the left’s star chambers. We are seeing codified insanity, anarchy and lawlessness! This is what the Bible calls the ‘Mystery of Iniquity’ playing out before our eyes, a sure sign we are living in the End Times.”

And with Steve also warning us that more sure signs of utter chaos ahead include the financial war that has been declared upon the independent media (why your AMAZING donations to ANP are critical and not only keep us online, but help keep a roof over our heads, food on our table and our bills paid!,) banks, credit card companies and even UPS seemingly declaring war upon the 2nd Amendment and the ‘weaponization‘ of the IRS, might Deagel’s 2025 forecast for America that shows us greatly ‘depopulated‘ show us the ‘end result‘ after another ‘Communist purge‘ and the Civil war that would surely result once Americans realize their friends and neighbors were being picked off one by one?

As we’ll explore in the final section of this story below, there have been numerous radical leftists calling for a purge of Conservatives, making the 2nd Amendment and Americans’ 450 million ways to defend ourselves that much more important in the days, weeks and months ahead. Certainly if Conservative Americans wake up one morning and find all of their favorite websites removed from the internet, proving the 1st Amendment no longer exists, that’d be absolute proof ‘America‘ had completely fallen.