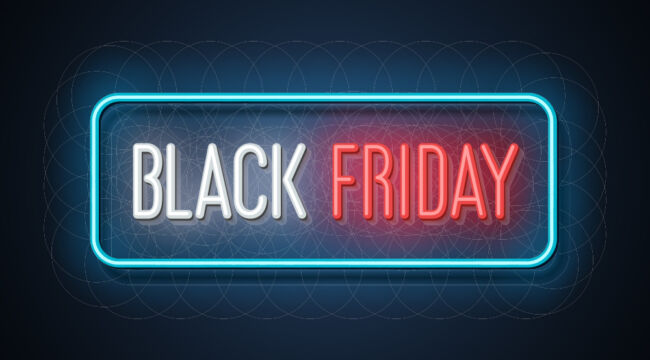 Black Friday’s sales set a new record this year, up 2.3% over 2021. Thanksgiving online sales were also up 2.9%. So don’t listen to any gloom and doom talk about a recession. Just look at the numbers.

All of those sales figures are nominal. In other words, they don’t account for inflation.

If an item costs 10% more this year than it did last year, even a decrease in sales numbers can still yield a nominal increase in final sales numbers.

But the actual number of sales would be down from the previous year. The final figures are simply masked because of the inflation.

If you adjust this year’s nominal sales numbers for inflation, you’ll discover that real sales are down about 5%.

That figure is consistent with recession. Of course, that doesn’t fit the mainstream narrative, but that doesn’t change the facts.

The Calm Before the Storm

It’s true, the U.S. economy may have emerged from a recession in recent months. The shorthand definition of a recession is two consecutive quarters of declining GDP (although some other factors such as unemployment are also taken into account).

The economy bounced back in the third quarter with 2.6% annualized growth, although inflation has been persistent and real wage growth has been negative because of the impact of inflation.

But in all likelihood, the economy is headed back into even more of a recession in real time, and certainly by the first quarter of 2023, due to the Fed’s interest rate policy.

The Fed has raised interest rates from 0.0% to 4.0% in a matter of eight months and is on track to raise rates to 4.5% or higher before year-end. That’s the fastest rate tightening cycle since Paul Volcker’s Fed in the early 1980s.

Behind it all is inflation. The U.S. faces the highest inflation since 1981. Prices of food, electricity and gasoline have gone up even faster than the overall rate of inflation, which is currently 7.7% (year-over-year).

That’s down slightly from prior months including 9.1% in June, 8.5% in July, 8.3% in August and 8.2% in September. Still, this series represents the highest rates of inflation since 1981.

And when consumers spend more on essentials like food and gas, they have less discretionary income to purchase clothing, home goods, vacations, entertainment, new cars, etc.

Meanwhile, monetary policy usually works with a lag of about nine–12 months on average. The Fed began tightening in March, nine months ago. That means the most serious impacts of the Fed’s dramatic tightening are only just beginning to be felt.

We’ll experience the worst of these impacts next year in 2023. A recession and higher unemployment are practically baked into the cake already, which will reverberate throughout the economy.

Don’t Forget About the Supply Chain

On top of all that, supply chain issues still hover over the economy. In fact, if you think the supply chain crisis is over, it’s not.

Amazon’s on strike. A possible railroad strike is next. And, we’re running out of diesel fuel fast. That’s not a good combination, to say the least.

This time last year the supply chain crisis was splashed all over the headlines. Empty shelves were common in supermarkets. Wait times for delivery of new cars was a year or longer. Online shopping was no better.

You’d find what you wanted on a name-brand website only to learn that they didn’t have your size or color and wouldn’t have anything available soon.

Airlines had massive cancellations. When some goods were available, you discovered that the manufacturer was putting smaller quantities in the same packages, a practice known as “skimpflation.”

Some shortages were more than just inconvenient. Baby formula shortages jeopardized infant health and nutrition when there were no substitutes for the particular brand that was out of stock.