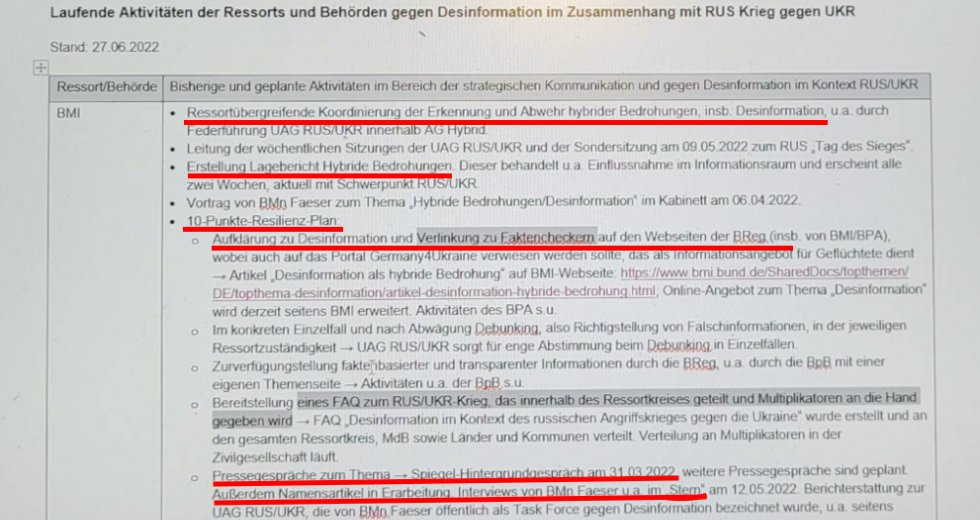 The below is a translation, made with the permission of the author, of Part I (dated 29 September 2022) of Florian Warweg’s exclusive article in NachDenkSeiten, a careful and reliable German new media platform. The original there contains several screenshots of the German document that has been leaked.

Leaked document: How the Federal German Government is working on “Gleichschaltung of the narrative” on the Ukraine war—Part I

NachDenkSeiten has exclusively been leaked an internal document of the German Government. We were able to verify the paper and we also know the identity of the whistleblower. The document gives an illuminating insight into the extent of the horizontal and vertical structures of—there is no other way to put it—propaganda by the German state at federal level, especially as regards the official involvement of media (e.g. Der Spiegel and Stern), Western social media corporations, educational institutions and so-called “fact-checkers”. Even primary school children are being targeted. What emerges is a concerted attempt by the Federal Government to subject information to Gleichschaltung.

The document is entitled “Current Activities of Departments and Authorities against disinformation in connection with the RUS war against UKR“, runs to ten pages, and meticulously lists the relevant activities of the federal ministries and subordinate authorities as of 27 June 2022. Moreover, these activities are altogether quite something.

In this first [published] part of its evaluation, NachDenkSeiten will concentrate on the role of the Federal Interior Ministry (BMI), the German Foreign Office (AA), Federal Press Office (BPA) and Federal Commissar for Culture and the Media (BKM). In the second part, we shall look at the activities of the Ministry for Digital Affairs and Transport as well as the Ministry for Family Affairs and the Ministry of Defence [all likewise at federal level].

The list begins with the SPD-led Federal Ministry of the Interior (BMI) under Nancy Faeser. The BMI is to take the lead and coordinate the “identification of and defence against hybrid threats” in an “interdepartmental” manner. This will be led by the “UAG RUS/UKR” (UAG stands for “sub-working groups” in ministerial parlance). One of the undertakings in this regard is a situation report on “Hybrid Threats” with a focus on Russia-Ukraine, to be drafted every fortnight. However, the “Ten-Point Resilience Plan” listed in the document is particularly eye-catching.

The first point in this “plan” is concerted “linking to fact-checkers on federal government websites”. Private “fact-checkers” such as Correctiv, or contribution-financed ones such as the ARD-Faktenfinder, financed mainly by the US billionaire and eBay founder Pierre Omidyar, are to be massively advertised through the “websites of the Federal Government”. So much for the vaunted “political neutrality” and “independence” of the fact-checkers.

Furthermore, pamphlets on “disinformation in the context of the Russian war of aggression against Ukraine” are to be produced and sent to federal ministries and the Bundestag, Länder [states] and municipalities. The list is replete with the reference: “Distribution to multipliers in civil society is underway”.

The fifth point in the “Resilience Plan” is also particularly revealing; it is devoted to cooperation with the press. Mention is made, for example, of a “Spiegel background discussion” on 31 March and the preparation of features and interviews with Interior Minister Faeser; explicit reference is made in this context to Stern and Tagesspiegel. It is also mentioned that the term “Anti-Disinformation Task Force” has successfully been embedded in [media] reporting. In the document, (Russian) “disinformation” is understood as a blanket term for anything that amounts to reporting the official Russian position. And this is exclusively in relation to the Russian side. Neither official Ukrainian nor US talking points on the war in Ukraine are assessed by the German Government as “disinformation” per se in the same manner.

Another aspect of the plan is “outreach into the parliamentary arena”, i.e. influencing members of the Bundestag and state parliaments—a not unproblematic undertaking, given the established separation of powers between the executive and the legislature.

Likewise, the “resilience plan” has as a central point the “occasion-related” intensification of contacts and talks with the platform operators of social networks “in order to sensitise them to state-directed disinformation”. The document explicitly mentions Twitter, Meta, Google and Telegram in this regard. The talks are to be held at “junior minister [Staatssekretär] level”.