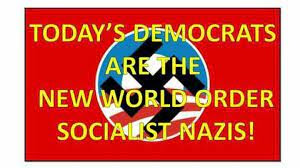 A recent video showed why fascism is a far-left phenomenon, but leftists never fully understand this because they get only one side of the story.

Serious question: Do anti-liberty leftists ever look in the mirror or have a moment of self-reflection that maybe they’re the threat to our constitutional republic?

Do they ever consider the possibility that they are the “baddies“?

Do they understand that we of the pro-freedom right really don’t have a choice in being inundated with leftist propaganda 24/7? Even the radio stations that carry our favorite pro-freedom programming tend to lean toward the collectivist side of the spectrum.

Don’t even mention National Propaganda Radio, funded by our tax dollars taken at gunpoint, where their idea of “balance” is a gaggle of leftists with an oh, so slightly different viewpoint on the definition of socialism.

VOICE: This means war. That is where we are. We are at war with these people. These folks are evil.

VOICE: There is an ultra-right MAGA contention and this country that wants to overthrow the U.S. government.

VOICE: The extremists that we’re dealing with every single day, we have to kill and confront that movement. …

VOICE: I see this as a party, a MAGA party that is no longer confident that they can win elections with votes. And so now they’re seeking to enact their political will through violence.

VOICE: This is literally what conservative white folks do when they don’t get their way. They turn violent. …

VOICE: These crazed, deranged folks, who want to impart evil in every facet of our society.

VOICE: To the elite, you know, this is a — literally, a call to arms.

That is the far left saying those things, projecting their ideas on the pro-freedom right — “literally, a call to arms.” Does it even sound as though they have a toehold on sanity?