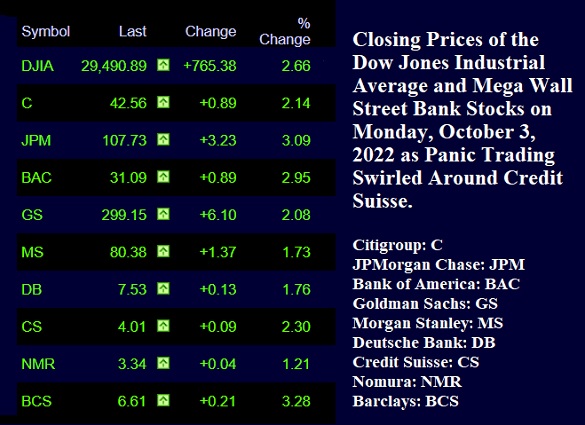 At 6:53 a.m. this morning (ET), Dow futures were up 454 points. That followed the Dow Jones Industrial Average gaining 765 points yesterday. No one who has been a trader on Wall Street or a stock broker for multiple decades believes this rally is real. Wall Street veterans are thinking that either the Fed’s plunge protection team or the Treasury’s plunge protection team is behind the rally. Equally unbelievable, as the chart above indicates, is the fact that the major mega banks on Wall Street closed in the green yesterday. Many of these are counterparties to Credit Suisse derivatives and thus subject to the potential for contagion.

Until everyone who works on Wall Street is 25 years old and too young to remember what happened in 2008 after Citigroup began to quake, Wall Street traders are not going to believe that the Dow can stage a legitimate rally or even a short squeeze rally when a Global Systemically Important Bank (GSIB) such as Credit Suisse is blowing out its Credit Default Swaps (CDS).

The 5-year CDS of Credit Suisse has spiked from a reading of 55 basis points in January to an historic intraday high of more than 350 basis points on Monday. The price of a Credit Default Swap reflects the cost of insuring oneself against a debt default by the bank. Who would be stampeding into the CDS of Credit Suisse and driving up the cost of protection? The mega banks on Wall Street that are counterparties to its derivative trades come to mind, as well as hedge fund speculators.

Credit Suisse is Switzerland’s second largest bank, after UBS. It is also a major trading house on Wall Street and a derivatives counterparty to other global banks. Its  shares tumbled to an intraday historic low on Monday before closing up in New York, but still at the single-digit price of $4.01. The shares of Credit Suisse have lost 58 percent of their value year-to-date, based on yesterday’s closing price – far worse than its peer global banks.

Various analysts on Wall Street were issuing votes of confidence on the bank yesterday. Unfortunately, one can’t rely on the analysts at other global banks on Wall Street to tell the truth about how bad the situation is at Credit Suisse. The derivative desks of these same banks are highly likely derivative counterparties to Credit Suisse and could lose billions of dollars if it defaults and catch the contagion it leaves in its wake. In fact, many of these banks are likely demanding more cash collateral from Credit Suisse on those derivative trades as we type these words.

The panic around Credit Suisse has been growing as its share price dived this year and last after the bank suffered over $5 billion in losses from its tricked-up derivatives with the family office hedge fund, Archegos Capital Management. Archegos went belly up in March of last year. Credit Suisse’s reputation took another hit from its involvement in the Greensill Capital scandal. Then, of course, there was the infamous spy-gate scandal in 2019 where the bank spied on and followed various employees. (You can’t make this stuff up.)

The panic moves around Credit Suisse’s shares and CDS on Monday were fueled by a Tweet that went viral on Saturday. ABC business reporter, David Taylor, Tweeted this statement: “Credible source tells me a major international investment bank is on the brink.” The Tweet was subsequently removed after it had been retweeted more than 4,000 times.

“As the financial condition of Credit Suisse continues to deteriorate, raising questions of whether it will collapse, the world and U.S. taxpayers should be deeply worried as multiple, simultaneous shocks shake the foundations of economies worldwide. Credit Suisse is a global, systemically significant, too-big-to-fail bank that operates in the U.S. and is deeply interconnected throughout the global financial system. Its failure would have widespread and largely unknown repercussions from the inconvenient to the possibly catastrophic.

“That is due, in part, to the failure of the Federal Reserve to properly regulate the activities of foreign banks that have U.S.-based operations. The U.S. has a largely ineffective regulatory framework with gaping loopholes that fail to include some of even the most basic safety and soundness requirements, which incentivizes regulatory arbitrage. As a result, the U.S. financial system and economy are needlessly threatened.

“An effective and appropriate regulatory framework for large foreign banks that covers all of their U.S.-based affiliates should have been established when the Fed set up so-called U.S.-based intermediate holding companies (‘IHCs’) that they regulate. Instead, U.S.-based branches of foreign banks (which are not consolidated within the IHC) face significantly weaker standards than the IHC, remarkably including no specific capital requirements in the U.S. Furthermore, the branches have significantly weaker liquidity requirements. This has resulted in many foreign banks – including in particular Credit Suisse – engaging in regulatory arbitrage by shifting large amounts of assets from their IHCs to their branches, entities that are entirely reliant on the resources of their foreign-based parent companies. The 2008 financial collapse proved that these resources are not available in periods of stress, which is why the U.S. bailed out so many foreign banks operating in the U.S. The Fed should have stopped that long ago.

“As is well-known, risks in the global financial system that materialize elsewhere easily end up becoming risks here in the U.S. and threaten our financial system and economy. Those risks are amplified by the unprecedented fiscal and monetary policies attempting to address the many unexpected shocks from the pandemic and war. The Fed must see Credit Suisse as a warning sign and improve the regulatory framework for large foreign banks and all banks to ensure that the American financial system and economy are properly protected.”