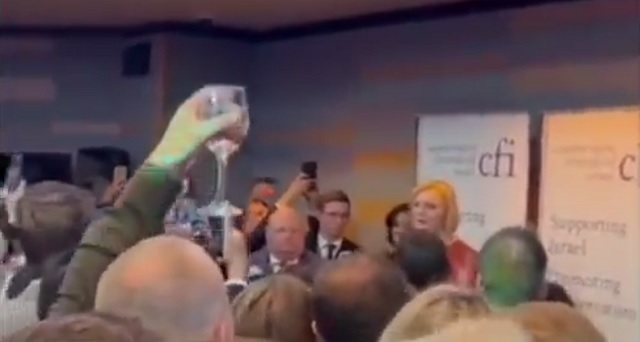 Newly appointed Prime Minister Liz Truss declared her undying support for Zionism and Israel during a conference with the Conservative Friends of Israel on Sunday.

“I am so pleased to be here for the first time at the CFI event as your Prime Minister,” Truss said. “As you know, I am a huge Zionist, I am a huge supporter of Israel, and I know that we can take the UK-Israel relationship from strength to strength.”

“Believe me, the UK will never allow – together with our allies – Iran to get a nuclear weapon,” Truss pledged, echoing a top Israeli priority.

British Prime Minister Liz Truss was invited to an event by the Conservative Friends of Israel, where she proclaimed that she’s a “huge Zionist” and “a huge supporter of Israel”. pic.twitter.com/ZgYmNoVw5z

Other top officials also pledged their undying allegiance to Israel during the event.

[…] Foreign Secretary James Cleverly spoke at the event of his “incredible pride” at being involved in the “warming of relations between Israel and its neighbours in the region”, adding that it “is something the UK should celebrate”.

[…] Committing to visiting Israel soon Cleverly said: “You know what I know…Israel has been a beacon of democracy, liberalism, openness, tolerance in a part of the world where that has not been the history”.

[…] Conservative Party Chairman Jake Berry stated: “I follow the Prime Minister in stating in no uncertain terms the commitment of this Party to support the State of Israel. You have my unwavering commitment as Chairman of the Party that we will continue to build strong relationships with the State of Israel and to support it in its fight to ensure that it remains safe and that the capital in Jerusalem is the home to our new Embassy”.

[…] International Trade Secretary Kemi Badenoch said that the UK-Israel Free Trade Agreement would be “right at the top of the list” of her priorities.

Secretary of State for Digital, Culture, Media and Sport Michelle Donelan announced that one of her first international visits will be to Israel and said “there are so many lessons that we can take from Israel”.

The Culture Secretary said she was “exceptionally proud of the work I did as Universities Minister to crack down on the antisemitism that runs through some of the political movements still in this country”.

She vowed: “As a Government, we remain firm on our commitment to stamp out antisemitism in every corner of our society. One of the things I did was to put the largest set of sanctions on the [National Union of Students] because they fail to recognise what they were doing.

” Under this Prime Minister we will be taking even more of those actions, because we certainly should be ensuring that people who grow up in the society of modern Britain don’t even have to consider antisemitism”.

Liam Fox MP, who is standing for election to be the Chairman of the Foreign Affairs Select Committee, heralded the “ground-breaking” Abraham Accords which would “bring prosperity across the region”.

A poll released last week found Truss has a negative net approval rating of -37, with only 18% of Britons approving of the job she’s doing and 55% disapproving.

Truss’ government has been celebrated by the media for having no white men in any significant positions of power.