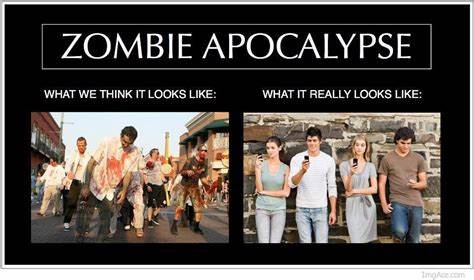 The smartphone has begun to play a huge role In dumbing down America. Rather than being a source to move us forward, it has become an albatross around the necks of many weak-minded souls that depend on them. People turn to these devices for all kinds of unneeded updates including performing simple math problems so they don’t have to think.

Originated in 1933, the term “dumbing down” was movie-business slang, used by screenplay writers, meaning: “to revise to appeal to those of little education or intelligence.” For those with little drive or purpose, the tendency to seek distraction and relief from unpleasant realities, especially by seeking entertainment or engaging in fantasy find great comfort in the constant flow of dribble a cell phone can provide. In short, dumbing down is the deliberate oversimplification of intellectual content in education, literature, cinema, news, video games, and culture.

It should be noted this is being written just as the world is on the cusp of being offered a whole new recipe that may lead to more social dysfunction. That comes in the form of “virtual reality” which offers an even stronger form of escapism that may result in damaging the ability of people to relate to each other in the real world. Especially worrisome is the effect it might have on children that experience and embrace it. Their ability to separate this fake virtual world from reality could become impaired.

A great deal of the problems with smartphones are rooted in the idea everyone deserves one. Yes, I said deserves, not needs. Smartphones are now considered by many people as an extension of their being. A government program started years ago has mushroomed in size and transfers a huge amount of wealth down the social ladder. Years ago I wrote an article that outlined a government program supplying free phones to people with low incomes or that have been declared needy. At that time these phones have become known as “Obama Phones.” Below I give some of the details about the program including who qualifies. If you want to be popular with the voters give them free stuff and let them know that they should not bite the hand that feeds them. 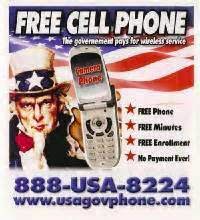 The term “Obama phone” is not a myth as an online search rapidly confirms. This popular government program explains why we see so many people that would appear to not have a dime in their pockets walking along or driving down the street talking on a cell phone. What exactly is the free Obama phone? It is a program that is meant to help the financially unstable who cannot afford access to a cell phone. It seems that communication should not be limited to people based on what they can afford. The Lifeline program started decades ago to help low-income families have access to landlines has been expanded. Over the years the cost of cell phones and cellular service has decreased and the program has been extended to cover cell phones.

So who qualifies? It appears little has changed over the years, it seems that if you or members of your household are, receiving the following benefits you automatically qualify for the Lifeline program. The best way to know if you qualify is by filling out an application for a Lifeline provider in your state. Those interested in the program must have an income of less than 135% of the Federal Poverty Guidelines or about $22,350 per year for a family of four.

Lifeline is a government-sponsored program, but who is paying for it? Some people claim that the government is using taxpayers’ money to run this program, however, the claim is false. The clever clowns we have sent to Washington found a backhanded under-the-table sort of way to make it appear it is not taxpayer money. Universal Service Fund (USF) which is administered by the Federal Communication Commission along with the Universal Service Administration Company (USAC), pays for the Lifeline phone assistance program. The Universal Service Fund (USF) was created back in 1997 by Federal Communication Commission to achieve the goals set by Congress under the Telecommunication Act of 1996. According to the Act, service providers are obliged to contribute a portion of their interstate and international telecommunications revenues. In short, paying phone customers are paying for it.

It is written that if you are one of those people who have lost their jobs due to the recession, then probably you’re having a hard time with your daily expenses. On top of that, paying telephone bills is just another pressure. You can get rid of this burden by applying to the “Lifeline Assistance Program” run by the government. To get a phone contact the provider of this service. The government has approved many companies at the national and regional levels to provide this service to eligible people.

Just how much might one of these free government cell phones change your life?

And the good news is that while a government-assisted cell phone provides you with up to 250 monthly minutes to go with your free cell phone. While that’s a generous contribution from the government, it’s barely enough airtime to last many people a month. But good news is they can easily buy more minutes for the phone from each of the major Lifeline cell phone companies. You can see this is what has happened when it has gotten to the point where people carry their phone in their hand as they go about their business. Apparently, if you use a promotion code, you can get some very good deals.