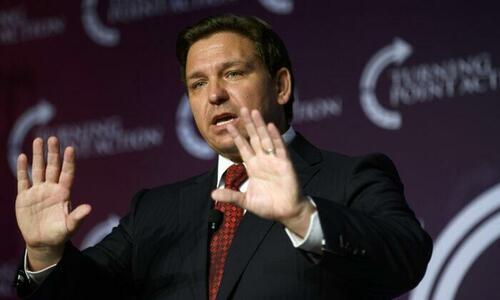 According to Fox News, nonprofit immigrant advocacy group Lawyers for Civil Rights filed the suit on behalf of Alianza Americas, which was described in a press release as “a network of migrant-led organizations supporting immigrants across the United States.”

The lawsuit was filed in the District of Massachusetts, and alleges that DeSantis and other officials “designed and executed a premeditated, fraudulent and illegal scheme centered on exploiting this vulnerability for the sole purpose of advancing their own personal, financial and political interests.”

The grants were to support policy advocacy on immigration, a Global Compact for Migration initiative and to strengthen the group’s international work in Central America and Mexico.

The law firm filing the suit, Lawyers for Civil Rights, received $50,000 from the Borealis Philanthropy in 2019, tax forms show. Borealis is a left-wing donor-advised fund that acts as an intermediary steering Democratic money to organizations.

Borealis has partnered with Black Lives Matter and the left-wing Marguerite Casey Foundation, which advocates for the abolishment of policing and prisons. -Fox News

Another liberal group, the MacArthur Foundation, gave Alianza Americas $1.26 million between 2008 and 2020.

The class-action lawsuit filed by Lawyers for Civil Rights alleges that migrants were told they were headed towards Boston or Washington, “which is completely false,” and that they were induced to cross state lines under false pretenses – carrying perks such as $10 McDonald’s gift certificates.