The Case-Shiller index, which lags reality on the ground by 4-6 months, is starting to pick up the price drops in Seattle, San Francisco, San Diego, Los Angeles, Denver, and Portland.

The housing market is going through some navel gazing, as many buyers evaporated at current prices and mortgage rates. They’re still out there, but they’re a lot lower, and many sellers haven’t figured that out yet, though some started cutting their asking prices but not nearly enough, and deal volume has plunged.

Sales volume of existing homes plunged by 20% from a year ago across the US, and by 31% in California, and by 41% in San Diego. Median prices in the West have begun to drop, and in the San Francisco Bay Area fell below year-ago-levels, including by 8% in San Francisco. Sales of new houses plunged by nearly 30% year-over-year across the US, and in the West by 50%, as the supply of new houses has exploded to 11 months, the highest since the peak of Housing Bust 1. And big institutional buyers have started to pull out of this market because they don’t want to overpay. This has been going on for months.

But today, the S&P CoreLogic Case-Shiller Home Price Index, which lags reality on the ground by 4-6 months, finally picked up the first month-to-month price declines – all of them in the West: the metros of Seattle, San Francisco, San Diego, Los Angeles, Denver, and Portland.

Today’s release of the Case-Shiller Index was for “June,” which consists of the three-month average of closed home sales that were entered into public records in April, May, and June, of deals that were made a few weeks to a couple of months earlier, roughly in March through May.

By mid-April, the average 30-year fixed mortgage rate pierced the 5% mark and has stayed above 5% ever since. So here we go.

The Most Splendid Housing Bubbles where prices fell.

Seattle metro house prices dropped by 1.9% in “June” (three month moving average of April, May, and June) from “May,” wiping out in one month the gains of the prior two months plus some. This was the first month-to-month decline since October 2019, after a totally ridiculous spike. It chopped the year-over-year spike down to 9.3%, from 27% a few months earlier. 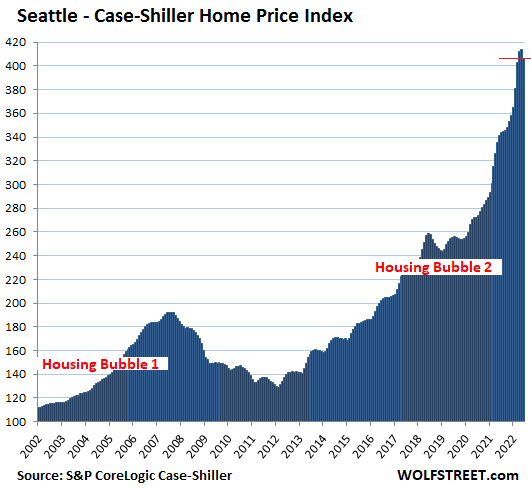 San Francisco Bay Area house prices fell by 1.3% in “June” from May, below the level of April, and the first month-to-month decline since June 2020, wiping out in one month the gains of the prior two months. This whittled down the year-over-year spike to 16.1%, from over 24% in prior months.

For the Case Shiller Index, the metro consists of the five-counties covering San Francisco, part of Silicon Valley, part of the East Bay, and part of the North Bay. 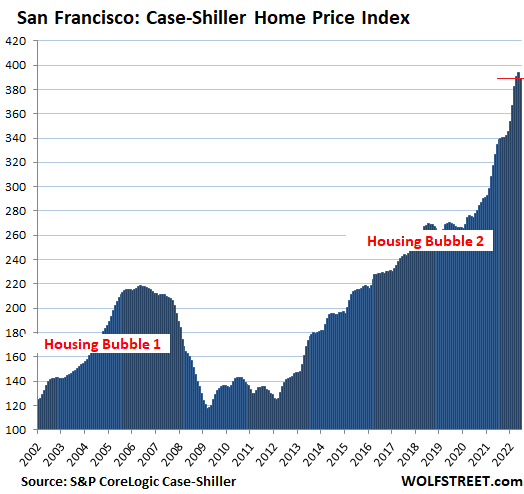 San Diego metro house prices fell by 0.7% in “June,” the first month-to-month decline since October 2019, after a ridiculous spike. The index dropped below the April level, thereby wiping out in one month the gains of more than two months. 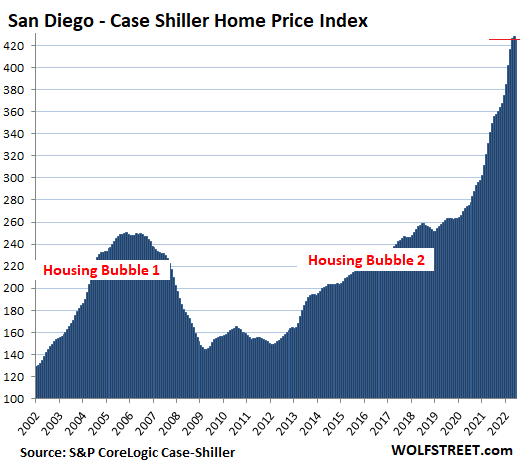 The index value of 425 for San Diego means that home prices shot up by 325% since January 2000, when the index was set at 100, despite the plunge in the middle (CPI inflation amounted to 75% over the same period).

Los Angeles metro house prices fell by 0.4% in June from May, which whittled the year-over-year price spike down to +19.4%. 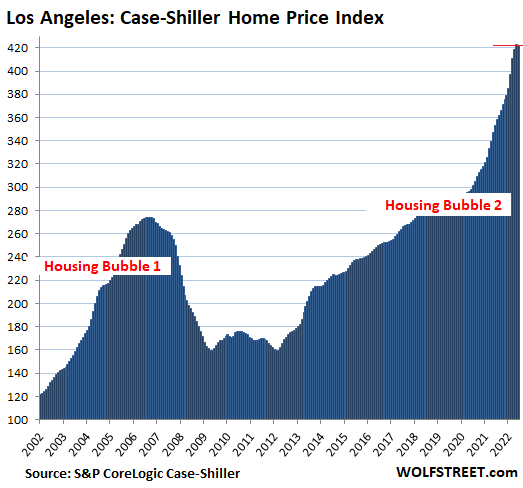 Denver metro house prices dipped 0.1% in June from May, whittling down the year-over-year gain to 19.3%: 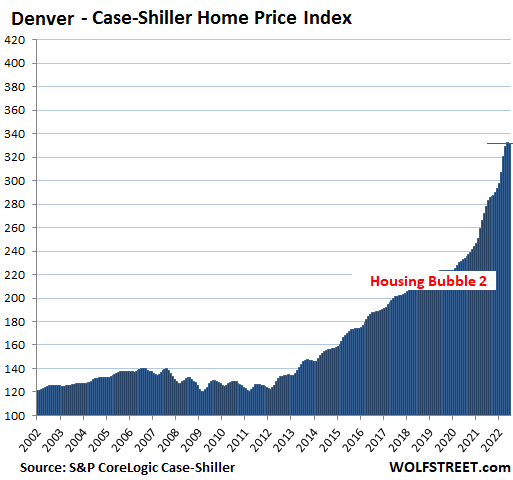 Portland metro house prices dipped 0.1% in June from May, which whittled down the year-over-year gain to 14.7%. The month-to-month dip, the first since October 2019, is too small to mark on this 20-year chart: