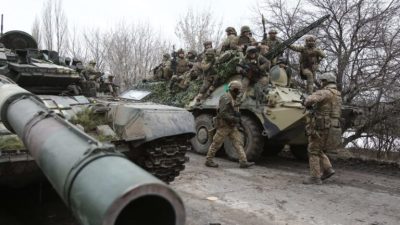 William G. Walker had been appointed Head of the OSCE Kosovo Verification Mission (KVM). A tailor-made assignment: Walker was well-known for his role in the “Iran-Contragate” scandal during the Reagan administration. The KLA insurgency was in many regards a “carbon copy” of the Nicaraguan Contras which had also been funded by drug money with covert support from the CIA.

In Kosovo, William G. Walker applied his skills in covert operations acquired in Central America. As head of the Kosovo Verification Mission (KVM), Walker maintained close links to the KLA military command in the field. From the outset of his mission in Kosovo, he used his position to pursue the interests of the US-NATO Alliance.

The so-called “Racak massacre” occurred shortly before the launching of the Rambouillet “peace initiative” (March 18, 1999),  although it turned out to be a fake [False Flag], the Racak massacre nonetheless played a key role in “setting the stage” for NATO’s air raids against Yugoslavia which commenced on March 23-24, 1999.

William Walker declared (in his capacity as head of KVM) that the Yugoslav police had carried out a massacre of civilians at Racak on January 15th 1999. The Yugoslav authorities retorted that local police had in fact conducted an operation in this village against the Kosovo Liberation Army and that several KLA soldiers had died in cross-fire.

As later reported by several French newspapers (Le Monde, Le Figaro and Liberation), it was confirmed that the “Racak massacre” was indeed “fake” put together with a view to discrediting Belgrade:

“Eventually, even the Los Angeles Times joined in, running a story entitled “Racak Massacre Questions: Were Atrocities Faked?” The theory behind all these was that the KLA had gathered their own dead after the battle, removed their uniforms, put them in civilian clothes, and then called in the observers.”

Excerpt From Chapter III of Michel Chossudovsky’s US-NATO’s War of Aggression against Yugoslavia
.
According to Paul Watson reporting from Pristina for the Los Angeles Times (January 23, 1999)
.

For days now, a thick winter fog has shrouded a stretch of the road to Racak, and there’s no way around it for anyone who goes looking for the truth of how at least 40 ethnic Albanian villagers died there.

A week has passed since U.S. diplomat William Walker, who heads a team of international peace monitors here in separatist Kosovo province, accused Serbian security forces of “an unspeakable atrocity,” and what struck him then as horrific facts are slowly being obscured by a cloud of a different sort.

It is the sort that comes from the mouths of politicians and diplomats, rebels and soldiers, journalists and propagandists. Racak’s truth may yet melt into it and become part of the ugly mystery that is Balkan war.

Several French and British newspapers, with respected names like Le Figaro, Le Monde and the Times of London, have published stories suggesting that Walker and his monitors might have been duped by a conspiracy concocted by ethnic Albanian guerrillas.

The articles cite partial video footage, shot by a Serbian cameraman with Associated Press Television, of the police operation in the village of Racak on Jan. 15. The footage suggests that corpses were moved before peace monitors started investigating the next day, the reports claim.  (emphasis added)

The OSCE Role in Relation to the Bucha massacre

It is worth noting that the OSCE representative in Ukraine has been involved in the assessment of the Bucha Tragedy.

Baseless accusations were directed against Russia on April 5, 2022, prior to the conduct of an OSCE investigation on the Bucha massacre.

The withdrawal of Russian troops from the periphery of Kiev had been announced by Russia’s Deputy Defense Minister Alexander Fomin, who was leading the Russian peace delegation in Istanbul:

“In order to increase mutual trust and create the necessary conditions for further negotiations and achieving the ultimate goal of agreeing and signing an agreement, a decision was made to radically, by a large margin, reduce military activity in the Kyiv and Chernihiv directions.”  (emphasis added)

It is worth noting that the withdrawal of Russian troops (March 30) was confirmed by the Mayor of Bucha on March 31st. See video below.

Regarding Evidence: See the following articles

Massacre in Bucha. Was it a False Flag?

Civilians were shot in Bucha, Ukraine, as reported by the Kiev government on April 3, 2022. The Russian army had withdrawn from the village on March 30. On March 31, the mayor of Bucha had reported joyfully and good-humoredly about the Russians‘ withdrawal in a video. There was no talk of deaths yet. They came later.

On April 3, the Ukrainian propaganda machine attempted another attack against Moscow. A few videos showing dozens of civilians who were allegedly killed by the Russian servicemen were widely spread by all the Ukrainian MSM.

The main thesis of the Ukrainian and Western media is that the Russian military left Bucha, causing huge civilian casualties. One of the main pieces of evidence was a video of the AFU driving along the city. Corpses of civilians were shown laying along the road.