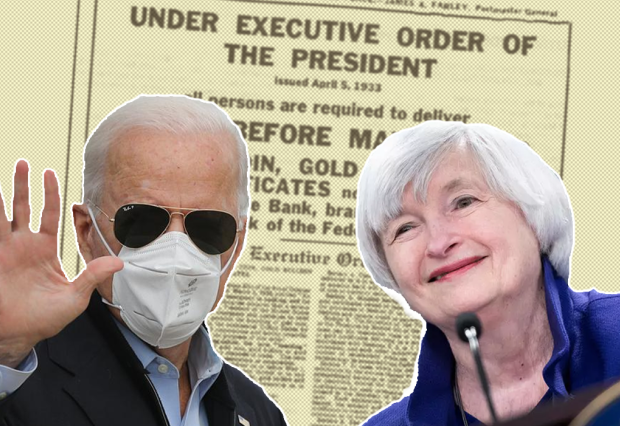 Today is the eighty-eighth anniversary of Executive Order 6102, signed by President Franklin Delano Roosevelt, “forbidding the hoarding of gold coin, gold bullion, and gold certificates within the continental United States.” The order was one of the several disastrous responses to the Great Depression that succeeded in escalating the financial crisis. Later in the year, the US Congress would pass a resolution retroactively supporting the legislation; however, it was the determined autocratic leadership of FDR that made way for these unprecedented measures. It would be a crime for Americans to hold gold for over forty years, until President Gerald Ford reversed the order in 1974.

This episode has several lessons for the current financial environment, particularly given the acceleration of tyranny-by-expert rule that has taken over much of the worst this past year.

The underlying legislation that evoked by FDR’s executive order was the Trading with the Enemy Act of 1917—a by-product of World War I—despite the fact that the US was in no way in a period of war in 1932. Similarly, we have seen war on terror–inspired financial legislation increasingly used against American citizens. For example, in the name of “fighting terrorism” the US PATRIOT Act significantly increased know-your-customer laws, empowering federal regulators to use the traditional banking system to better track the economic behavior of American citizens.

In the eyes of the federal government, “antiterrorism” legislation was quickly expanded to include additional missions—such as stopping money laundering and drug crimes. Increasingly, these bogeymen have been used by policymakers around the world to erode financial privacy assets—such as cash and secret Swiss bank accounts.

On the domestic side, we have increasingly seen US corporate actors demonstrate their loyalty to the progressive political zeitgeist by proactively cracking down on various dissident political figures and conservative action groups. Bank of America, for example, has debanked various gun manufacturers and also turned over client data following the January 6 protests at the US Capitol. These moves could prove useful if BoA needs another federal bailout from a Biden-Harris administration, but highlights the degree to which the modern financial system can be weaponized against a state’s political enemies.

The same playbook is being increasingly used to target bitcoin and other cryptocurrencies that are beyond the reach of the state.

Earlier this year, Treasury secretary Janet Yellen indicated that cryptocurrencies are in her crosshairs, telling an industry roundtable that

[t]he misuse of cryptocurrencies and virtual assets is a growing problem…. I see the promise of these new technologies, but I also see the reality: cryptocurrencies have been used to launder the profits of online drug traffickers; they’ve been a tool to finance terrorism.

European Central Bank president Christine Lagarde has also called for global regulation of cryptocurrencies, responding to increased interest in these alternative assets. Of course, the increased interest in assets like bitcoin is itself a direct response to the monetary policy of the Federal Reserve, ECB, and other global central banks responding to government-caused economic shutdowns in 2020.

While central bankers often publicly dismiss the role of nonpoliticized assets like gold and bitcoin in financial markets, in their own circles they understand the dangers that exist in allowing the public the option of opting out of their financial schemes.

For example, at an annual Federal Reserve conference in 2016, the late Marvin Goodfriend noted the role that cash played in limiting what antisaving policies a central bank could pursue. He advocated the abolishment of cash in return, and drew comparisons to the elimination of the gold standard. In 2018, an IMF report warned that cryptocurrencies could reduce demand in fiat money, and recommended “rigorously applying measures to prevent money laundering and the financing of terrorism” in an attempt to undermine this consumer behavior.

In addition, central banks have sought to compete with the convenience of digital currency by developing their own versions. China—whose central bank has been one of the most aggressive in credit expansion since 2008—has recently released a “digital yuan,” while the ECB is working on a “digital euro.”

As I noted in 2017, this could set up a “next generation” of global currency war between private crypto and state digital currency. Since it is the nature of a state to defend its power, we should expect to see regulators and central bankers around the world escalate regulatory and legal pressure against financial assets beyond their control.