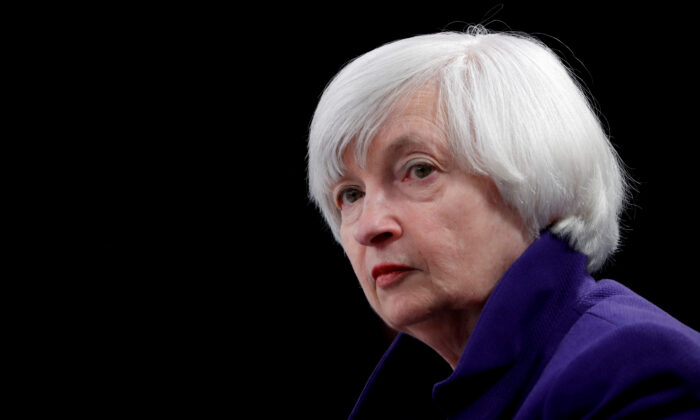 Treasury Secretary Janet Yellen said the Biden administration is looking at raising taxes on wealthy Americans and corporations—and may mull an outright wealth tax—to pay for future programs, as attention turns to funding measures for the next big-ticket legislative pushes likes the infrastructure plan.

Yellen made the remarks in an interview Sunday on ABC’s “This Week with George Stephanopoulos,” during which she made the case for continued short-term deficit spending to help remedy the economic woes of the pandemic while flagging the need for long-term fiscal discipline.

“In the longer run, we need to get deficits under control to make sure that our fiscal situation is sustainable,” Yellen said, after arguing that the low interest rate environment justifies debt-fueled stimulus to address what she said was the “most significant risk” to the economy, namely a workforce that is “scarred by a long period of unemployment.”

Yellen was asked how the Biden administration plans to pay for all the relief and other programs, with ABC reporter George Stephanopoulos asking specifically about the so-called ultra-millionaire tax recently proposed by Sen. Elizabeth Warren (D-Mass.). The idea is much the same as the one Warren floated during her failed 2020 presidential bid, namely to impose a 2 percent annual tax on the net worth of households and trusts between $50 million and $1 billion, and then an additional 1 percent surtax on net worth above $1 billion.

“He hasn’t proposed a wealth tax,” Yellen replied. “But he has proposed that corporations and wealthy individuals should pay more in order to meet the needs of the economy, the spending we need to do, and over time I expect that we will be putting forth proposals to get deficits under control,” she added.

“But no wealth tax?” Stephanopoulos asked.

“Well, that’s something that we haven’t decided yet, and can look at,” Yellen said. “President Biden during the campaign proposed a higher tax rate on corporations, on individuals and on payments, capital gains and dividend payments that are received, and those are alternatives that address—that are similar in their impact to a wealth tax,” she said.

While Biden has yet to announce any specific tax hike proposals, he has never endorsed a tax on net worth. White House press secretary Jen Psaki and Rep. John Garamendi (D-Calif.) recently confirmed that Biden is considering tax increases, new fees, and a corporate tax rollback to pay for the infrastructure plan that is in the pipeline.

The infrastructure plan has yet to be revealed, though analysts have predicted something in the range of $2 trillion to $4 trillion.

“This is the last thing we want to do as the U.S. recovers from the pandemic,” Garrett Watson, senior policy analyst at the Tax Foundation, told The Epoch Times.

He added that phasing in a corporate rate increase, as opposed to hiking immediately, “would in some ways be a worse idea, with firms delaying investment decisions as deductions would be more valuable against a higher corporate tax rate.”

“It would also make those investments less attractive in the long-run,” he added.

In her interview on ABC, Yellen was also asked about inflation concerns, which have have been raised due to a conflux of factors—the subsiding pandemic, fiscal stimulus, and loose monetary policies driving a recovery that could cause a spike in prices.

“Is there a risk of inflation? I think there’s a small risk,” Yellen said. “And I think it’s manageable. Prices fell a lot last spring, when the pandemic surged. I expect some of those prices to move up again, as the economy recovers the spring and summer. But that’s a temporary movement in prices.”