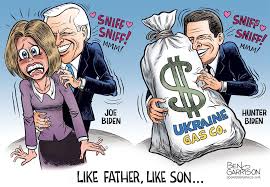 The announcement by the New York Post and a certain Mr Giuliani that a laptop belonging to Hunter Biden had been abandoned in a Delaware computer repair shop was greeted by the mainstream media with extreme skepticism. Such skepticism is always warranted when scandalous or salacious allegations are made against public figures, but it beggars belief anyone should attempt to blame this purported disinformation on “Russia, Russia, Russia”.

However, such carelessness is by no means unique. In the age of social media, many thugs take particular delight in filming their own outrages and posting them to Facebook, YouTube and similar sites; witness the appalling case of the moronic Jaden Hayden back in May.

Crimes also come to light by accident. When male nurse Andrew Hutchinson was arrested for voyeurism, a search of his mobile phone revealed he had filmed his rape of two unconscious patients at the John Radcliffe Hospital in Oxford where he worked.

The Anthony Wiener “sexting scandal” revealed a trove of unrelated documents transferred there by his wife Huma Abedin, documents that had no business being on the regular Internet. Finally, and most thematically, in 1997, the then glam rock star Gary Glitter took his laptop to a repair shop in Bristol where a technician found more than four thousand items of child pornography. In 1997, the cyber-world was a different place; there was no social media, and the sharing of images of extreme sexual perversion was limited for the most part to small cliques of acutely wary, depraved men.

Gary Glitter had a problem with drink, but not with cocaine like Hunter Biden.  The long term use of cocaine can cause problems with memory and other faculties, so it is quite possible that he could have taken his laptop to the shop and forgotten about it. Whatever, we should be grateful for the foresight of shop owner John Isaac in copying the hard disk and sending it to Giuliani’s lawyer, because the FBI have had the laptop for almost a year and appear to have done absolutely nothing with it.  Someone should ask Christopher Wray why; perhaps he is too busy chasing imaginary white supremacists in Portland and Minneapolis.

The reaction of the media to the New York Post article has been unprecedented and staggering. On Twitter you can find rape allegations against Donald Trump, allusions to the Clinton death list, and all manner of conspiracy garbage, but Hunter Biden taking bribes is taboo. Truly amazing.

Giuliani  has explained in a YouTube video the Chinese connection to Hunter. This is a specifically Chinese form of corruption, he said. Bribes are not paid direct to government officials, foreign or domestic, but to family members. Other commentators have noted this, including Glenn Beck, and it isn’t a uniquely Chinese method.

Joe Biden and his wife are said to have a net worth of $9 million, perhaps more depending on which source you consult. Did all this money really come from book deals and speeches?

In his classic 1984 speech on the Federal Reserve, the late Murray Rothbard gave another example of how vested interest works at the higher levels of government. If you don’t want to watch the whole speech, he makes this point from around 29 minutes. The men who run things don’t just drop out of the sky, he says; you need to be aware of what they did before they entered government and where they went afterwards. The same thing happens in the UK and undoubtedly many other countries, though not on the same scale as in the US. And let us not forget that Joe Biden has been in politics for nearly half a century including eight years as Vice-President.