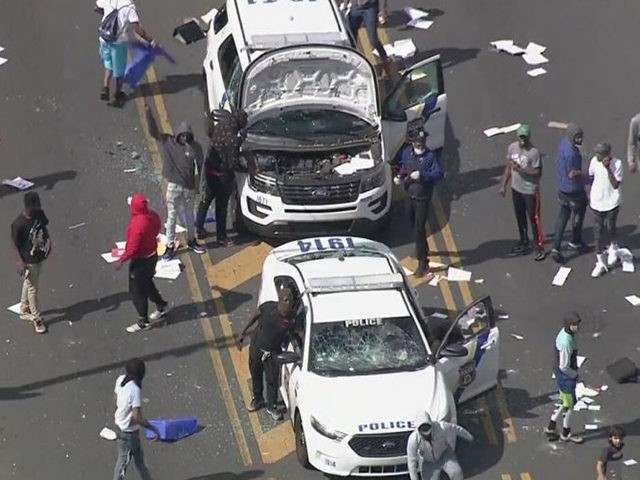 Chaos erupted early in Philadelphia on Sunday as protesters destroyed a line of police vehicles, smashing windows and setting them ablaze as a state of anarchy descended upon the streets.

Aerial footage shows rioters vandalizing a line of police vehicles, even smashing one into another and setting them on fire. According to FOX 29’s Steve Keeley, officers arrived to “help save businesses where many of the poorest residents shop,” and rioters vandalized the vehicles as officers were outside the stores:

POLICE CARS DESTROYED: Rioters destroy a line of police cars, ghost riding them into each other and setting them on fire in West Philadelphia.

The @PhillyPolice arrived to help save businesses where many of the poorest residents shop for food&clothes on S. 52nd Street. Many are minority owned businesses&police vehicles were then Vandalized as officers were outside at the stores, then vehicles set on fire @FOX29philly pic.twitter.com/j7u9stkmUX

Just up S.52nd Street from where police protecting other businesses the Sun Ray Drug Store being looted at 52nd&Walnut @FOX29philly pic.twitter.com/u5jb1HZmoy