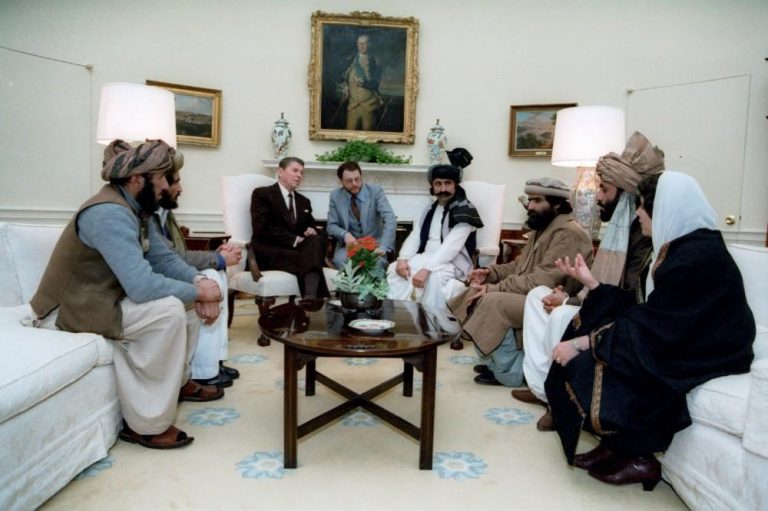 Read Part I from the link below.

Below is the second half and conclusion of “Afghanistan, the Forgotten Proxy War”. While the previous sections examined the economic roots of imperialism, as well as the historical context of the Cold War within which to situate the Mujahideen, the following explores the anatomy of proxy warfare and media disinformation campaigns which were at the heart of destabilizing Afghanistan. These were also a large part of why there was little to no opposition to the Mujahideen from the Western ‘left’, whose continued dysfunctionality cannot be talked about without discussing Zbigniew Brzezinski. We also take a look at what led to the Soviet Union’s demise and how that significantly affected the former Democratic Republic of Afghanistan and many other parts of the world. The United States has been at war in Afghanistan for four decades now, and it will reach its 40th year on July 3, 2019.

One of the key players in the anti-Soviet, U.S.-led regime change project against Afghanistan was Osama bin Laden, a Saudi-born millionaire who came from a wealthy, powerful family that owns a Saudi construction company and has had close ties to the Saudi royal family. Before becoming known as America’s “boogeyman”, Osama bin Laden was put in charge of fundraising for the Mujahideen insurgents, creating numerous charities and foundations in the process and working in coordination with Saudi intelligence (who acted as liaisons between the fighters and the CIA). Journalist Robert Fisk even gave bin Laden a glowing review, calling him a “peace warrior” and a philanthropist in a 1993 report for the Independent. Bin Laden also provided recruitment for the Mujahideen and is believed to have also received security training from the CIA. And in 1989, the same year that Soviet troops withdrew, he founded the terrorist organization Al Qaeda with a number of fighters he had recruited to the Mujahideen. Although the PDPA had already been overthrown, and the Soviet Union was dissolved, he still maintained his relationship with the CIA and NATO, working with them from the mid-to-late 1990s to provide support for the secessionist Bosnian paramilitaries and the Kosovo Liberation Army (KLA) in the destruction and dismantling of Yugoslavia.

The United States would eventually turn Bin Laden into a scapegoat after the 2001 terrorist attacks, while still maintaining ties to his family and providing arms, training, and funding to Al Qaeda and its affiliates (rebranded as “moderate rebels” by the Western media) in its more recent regime change project against Syria, which started in 2011. The Mujahideen not only gave birth to Al Qaeda, but it would set a precedent for the United States’ regime-change operations in later years against the anti-imperialist governments of Libya and Syria. 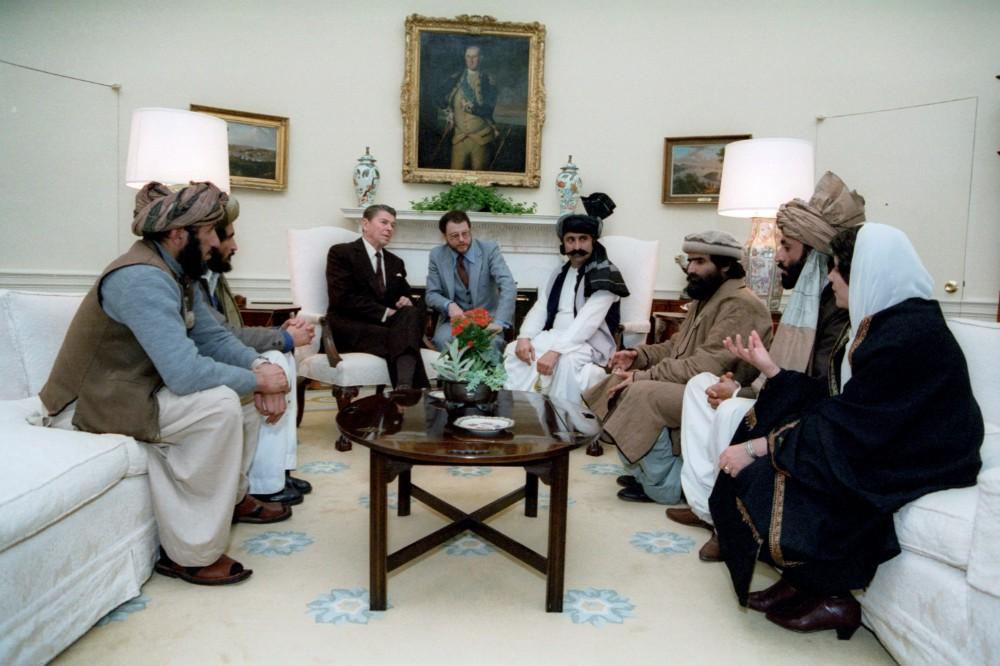 With the end to the cycle of World Wars (for the time being, at least), it has become increasingly common for the United States to use local paramilitaries, terrorist groups, and/or the armed forces of comprador regimes to fight against nations targeted by U.S. capital interests. Why the use of proxy forces? They are, as Whitney Webb describes, “a politically safe tool for projecting the U.S.’ geopolitical will abroad.”
Using proxy warfare as a kind of power projection tool is, first and foremost, cost-effective, since paid local mercenaries or terrorist groups such as Al Qaeda will bear the burden of combat and casualties rather than American troops in places like Libya and Syria. For example, it costs much less to pay local paramilitaries, gangs, crime syndicates, terrorist groups, and other reactionary forces to perform the same military operations as U.S. troops. Additionally, with the advent of nuclear weapons it became much more perilous for global superpowers to come into direct combat with one another — if the Soviet Union and the United States had done so, there existed the threat of “mutually assured destruction”, the strong possibility of instantaneous and catastrophic damage to the populations and the economic and living standards of both sides, something neither side was willing to risk, even if it was U.S. imperialism’s ultimate goal to destroy the Soviet Union.
And so, the U.S. was willing to use any other means necessary to weaken the Soviet Union and safeguard its profits, which included eliminating the Democratic Republic of Afghanistan even if it had neither the intent nor the means of launching a military offensive on American soil. Meanwhile, the Soviet Union had the means of producing a considerably large supply of modern weapons, including nuclear deterrents, to counter the credible threat posed by the United States. To strike the Soviet Union with nuclear missiles would have been a great challenge for the United States, since it would have resulted in overwhelming retaliation by the Soviet Union. To maneuver this problem, to assure the destruction of the Soviet Union while protecting the U.S. from similar destruction, the CIA relied on more unconventional methods not previously thought of as being part of traditional warfare, such as funding proxy forces while wielding economic and cultural influence over the American domestic sphere and the international scene.

Furthermore, proxy warfare enables control of public opinion, thus allowing the U.S. government to escape public scrutiny and questions about legal authorization for war. With opposition from the general public essentially under control, consent for U.S.-led wars does not need to be obtained, especially when the U.S. military is running them from “behind the scenes” and its involvement looks less obvious. Indeed, the protests against the war on Vietnam in the United States and other Western countries saw mass turnouts.

And while the U.S.-led aggression in Vietnam did involve proxy warfare to a lesser degree, it was still mostly fought with American “boots-on-the-ground”, much like the 2001 renewed U.S.-led aggression against Afghanistan and the 2003 invasion of Iraq. In contrast, the U.S. assault on Afghanistan that began in 1979 saw little to no protest. The Mujahideen even garnered support from large portions of the Western left who joined the chorus of voices in the Western mainstream media in demonizing the PDPA — a relentless imperialist propaganda campaign that would be repeated in later years during the U.S. wars on Libya and Syria, with the difference being that social media had not yet gained prominence at the time of the initial assault on Afghanistan. This leads to the next question: why recruit some of the most reactionary social forces abroad, many of whom represent complete backwardness?

In Afghanistan, such forces proved useful in the mission to topple the modernizing government of the PDPA, especially when their anti-modernity aspirations intersected with U.S. foreign policy; these ultra-conservative forces continue to be deployed by the United States today. In fact, the long war on Afghanistan shares many striking similarities with the long war on Syria, with the common theme of U.S. imperialism collaborating with violent Sunni extremists to topple the secular, nationalist and anti-imperialist governments of these two former ‘Soviet bloc’ countries. And much like the PDPA, the current and long-time government of the Ba’ath Arab Socialist Party in Syria has made many strides towards achieving national liberation and economic development, which have included: taking land from aristocratic families (a majority of whom were Sunni Muslims while Shia Muslims, but especially Alawites, traditionally belonged to the lower classes and were treated as second class citizens in pre-Ba’athist Syria) and redistributing and nationalizing it, making use of Syria’s oil and gas reserves to modernize the country and benefit its population, and upholding women’s rights as an important part of the Ba’athist pillars.

Some of these aristocratic landlords, just like their Afghan counterparts, would react violently and join the Muslim Brotherhood who, with CIA-backing, carried out acts of terrorism and other atrocities in Hama as they made a failed attempt to topple the government of Hafez al Assad in 1982.

The connection between the two is further solidified by the fact that it was the Mujahideen from which Al Qaeda emerged; both are inspired by Wahhabist ideology, and one of their chief financiers is the Kingdom of Saudi Arabia (as well as Israel, a regional imperial power and a key ally of the United States). In either case, these Wahhabi-inspired forces were vehemently opposed to modernization and development, and would much rather keep large sections of the population impoverished, as they sought to replace the PDPA and the Ba’athists with Sunni fundamentalist, anti-Shia, theological autocracies — Saudi-style regimes, in other words.

These reactionary forces are useful tools in the CIA’s anti-communist projects and destabilization campaigns against independent nationalist governments, considering that the groups’ anti-modernity stance is a motivating factor in their efforts to sabotage economic development, which is conducive to ensuring a favourable climate for U.S. capital interests. It also helps that these groups already saw the nationalist governments of the PDPA and the Syrian Ba’ath party as their ‘archenemy’, and would thus fight them to the death and resort to acts of terrorism against the respective civilian populations.

Zbigniew Brzezinski stated in a 1998 interview with Le Nouvel Observateur in response to the following question:

Q: And neither do you regret having supported the Islamic fundamentalism, having given arms and advice to future terrorists?

[Brzezinski]: What is most important to the history of the world? The Taliban or the collapse of the Soviet empire? Some stirred-up Moslems or the liberation of Central Europe and the end of the cold war?

Once again, he makes it clear that the religious extremism of the Mujahideen fighters was not an issue for Washington because the real political value lay in eliminating the PDPA and putting an end to Soviet influence in the Greater Middle East, which would give the U.S. the opportunity to easily access and steal the country’s wealth. And in order to justify the U.S. imperialist intervention in Afghanistan, as well as to obscure the true nature of the Mujahideen fighters, the intervention needed to be accompanied by a rigorous mass media campaign. The Reagan administration — knowing full well that American mainstream media has international influence — continued the war that the Carter administration started and saw it as an opportunity to “step up” its domestic propaganda war, considering that the American general public was still largely critical of the Vietnam War at the time.

As part of the aggressive imperialist propaganda campaign, anyone who dared to publicly criticize the Mujahideen was subjected to character assassination and was pejoratively labelled a “Stalinist” or a “Soviet apologist”, which are akin to labels such as “Russian agent” or “Assadist” being used as insults today against those who speak out against the U.S.-backed terrorism in Syria. There were also careful rebranding strategies made specifically for Osama bin Laden and the Mujahideen mercenaries, who were hailed as “revolutionary freedom fighters” and given a romantic, exoticized “holy warrior” makeover in Western media; hence the title of this section. The Mujahideen mercenaries were even given a dedication title card at the end of the Hollywood movie Rambo III which read, “This film is dedicated to the brave Mujahideen fighters of Afghanistan”; the film itself added to the constructed romantic image as it portrayed the Mujahideen fighters as heroes, while the Soviet Union and the PDPA were portrayed as the cartoonish villains. The Rambo film franchise is well known for its depiction of the Vietnamese as “savages” and as the aggressors in the U.S. war on Vietnam, which is a blatant reversal of the truth.