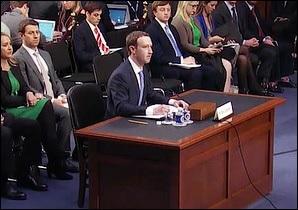 Being called a “digital gangster” by an investigative committee of the United States’ closest ally, the United Kingdom, might have been expected by the rational among us to do some serious damage to the share price of Facebook when it opened for trading this morning. The U.K. report was released yesterday when U.S. markets were closed for Presidents’ Day. But by this morning’s opening bell, it was business as usual for the serially investigated Facebook. Facebook closed Friday at $162.50 per share and opened this morning at $160.50. After a half hour of trading, Facebook’s stock was off a mere 63 cents.

America is now the political dystopia ruled by Wall Street banksters and digital gangsters so the stock market no longer punishes corporate criminality. In fact, there is ample evidence to suggest that it rewards it. Just look at how the stock of JPMorgan Chase has fared since its three criminal felony counts, to which it pleaded guilty, in 2014 and 2015: its share price has skyrocketed from $60 to $104.

As of Friday’s close, Facebook’s market capitalization (the total value of all of its shares outstanding) stood at $463.77 billion, putting it in the top 10 list of the most valuable publicly traded companies in the U.S. Facebook’s share price isn’t supported by a cash dividend because it doesn’t pay out even a penny to shareholders in a regular quarterly dividend. Even in the midst of a steady stream of scandals about its misuse of users’ private data and allowing its platform to become the playground of Russian disinformation agents, its share price hit an all-time high of more than $200 per share in July of last year.

One possible explanation for Facebook’s share price resilience is the fact that the Wall Street banksters are actively engaged in clandestine trading of the digital gangsters’ stock while the analysts at those banks are putting out “buy” ratings on Facebook.

According to tipranks.com, JPMorgan Chase, Goldman Sachs, and Credit Suisse all have buy ratings on Facebook. According to Wall Street’s self-regulator, Finra, those same Wall Street banks are actively trading the shares of the company in their own Dark Pools – unregulated stock trading platforms owned and operated inside the global banks.

Finra makes its Dark Pool trading data available on a three week delay. In Finra’s most recent report for the week of January 28, 2019, 127,037 unique trades were made by Wall Street’s Dark Pools in the shares of Facebook. JPMorgan’s Dark Pool, JPM-X, made 6,792 trades in Facebook’s stock that week; Goldman Sachs’ Dark Pool, Sigma-X2, made 7,979 trades; and Credit Suisse’s Dark Pool called Crossfinder made a whopping 19,754 trades in the shares of Facebook. All of this is being done under the nose of the Securities and Exchange Commission, whose Chairman, Jay Clayton, legally represented 8 of the 10 largest Wall Street banks in the three years prior to being handed the post as their top cop.

Yesterday, the U.K. Parliament’s Digital, Culture, Media and Sport committee released a 108-page report based on its 18-month investigation into digital disinformation campaigns that provided granular details on Facebook’s thuggish business model, inferring at one point that the U.S. should investigate the company under its Racketeer Influenced and Corrupt Organizations Act (RICO).

The report minced few words about Facebook or its CEO, Mark Zuckerberg, writing that the company and its management were “ ‘digital gangsters’ in the online world, considering themselves to be ahead of and beyond the law.” Using documents it obtained that were previously under seal in a U.S. court case against Facebook by Six4Three, a former app developer, the committee portrayed Zuckerberg as a serial obstructer and teller of falsehoods, writing that “…Mark Zuckerberg’s statement that ‘we’ve never sold anyone’s data’ is simply untrue. The evidence that we obtained from the Six4Three court documents indicates that Facebook was willing to override its users’ privacy settings in order to transfer data to some app developers, to charge high prices in advertising to some developers, for the exchange of that data, and to starve some developers—such as Six4Three—of that data, thereby causing them to lose their business. It seems clear that Facebook was, at the very least, in violation of its Federal Trade Commission settlement.”

The report backed up its position with emails obtained in the Six4Three lawsuit. The report noted the following:

“Facebook entered into ‘whitelisting agreements’ with certain companies, which meant that, after the platform changes in 2014/15, those companies maintained full access to friends’ data. It is not fully clear that there was any user consent for this, nor precisely how Facebook decided which companies should be whitelisted or not…

“Apps were able to circumvent users’ privacy of platform settings and access friends’ information, even when the user disabled the Platform. This was an example of Facebook’s business model driving privacy violations. Expanding the whitelisting scheme resulted in a large number of companies striking special deals with Facebook. A November 2013 email discussion reveals that Facebook was managing 5,200 whitelisted apps. From the documents we received, the following well-known apps were among those whitelisted:

“The Taxi app, Lyft: Konstantinos Papamiltiadis at Facebook wrote to Lyft on 30 March 2015: ‘As far as I can tell, the app ID below have been whitelisted for all Mutual Friends access’;

“AirBnB: Mr Papamiltiadis wrote to Airbnb on 18 March 2015: ‘As promised, please find attached the docs for Hashed Friends API that can be used for social ranking. Let us know if this would be of interest to you, as we will need to sign an agreement that would allow you access to this API’;

“Netflix: Chris Barbour and Mr Papamiltiadis at Facebook wrote to Netflix on 17 February 2015, and Netflix wrote on 13 February, ‘we will be whitelisted for getting all friends, not just connected friends.’ ”

The report also includes a large section on Facebook’s involvement in the Russian campaign to subvert democratic elections. It notes:

“The Committee has repeatedly asked Facebook, in written correspondence and in oral evidence, about Russian activity on Facebook and, in particular, about knowledge of the Russian adverts that ran during the presidential election in America in 2016. According to a New York Times article published in November 2018, Facebook had discovered suspicious Russia-linked activity on its site in early 2016, in an attempt to disrupt the presidential election. In September 2017, Alex Stamos, the then Chief Security Officer, told the members of Facebook’s Executive Board that that Russian activity was still not under control. The article claimed that Facebook executives, including Mark Zuckerberg and Sheryl Sandberg, attempted to deflect attention from their own company to other tech companies, by hiring a political consultancy, Definers Public Affairs, allegedly to spread anti-semitic information about George Soros and his campaigning activities, after Mr. Soros called Facebook ‘a menace to society’ in early 2018.”

The report chastises Facebook for failing to take meaningful action against malicious foreign actors, writing: “Information operations are part of a complex, interrelated group of actions that promote confusion and unrest through information systems, such as social media companies. These firms, in particular Facebook, need to take action against untransparent administrators of groups, which are being used for political campaigns. They also need to impose much more stringent punishment on users who abuse the system. Merely having a fake disinformation account shut down, but being able to open another one the next moment, is hardly a deterrent.”

The report recommends that the U.K. government launch “an independent investigation into past elections — including the UK election of 2017, the UK Referendum of 2016, and the Scottish Referendum of 2014 —  to explore what actually happened with regard to foreign influence, disinformation, funding, voter manipulation, and the sharing of data, so that appropriate changes to the law can be made and lessons can be learnt for future elections and referenda.”

COVID-19 Is a Vehicle for Democrat Control of Individuals