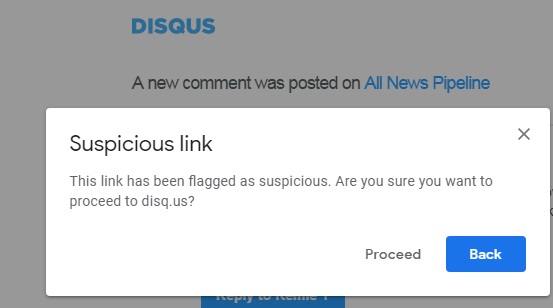 Another day and another dire warning from Google’s Gmail as I attempted to click a link from my Disqus email notifications, left in the Breaking News Alert page, telling me the link Gateway Pundit was “suspicious” and “leads to an “untrusted site,” before asking me if I wished to proceed or go back.

Welcome to the world of Conservative Independent Media.

Gateway Pundit is a conservative site, that has been around since 2004, run by Jim Hoft. As all media, GP is run by humans and I will not say they have never made a mistake, but they do not pump fake news. The liberally biased Politifact has rated three statements by Gateway Pundit, which is listed in their “All statements from The Gateway Pundit,” page which “fact checks” statements and links to those fact check articles.

Interestingly enough, even the story Politifact ranked as false, was mostly true, but Politifact tried to split hairs in order to justify the “false” ranking.

Quick Recap: The accuser of Roy Moore admitted that she added something to Roy Moore’s signature in her yearbook, after many outlets had already noticed the difference in writing. So Gateway Pundit, headlined “WE CALLED IT! Gloria Allred Accuser **ADMITS** She Tampered With Roy Moore’s Yearbook ‘Signature’.”

Technically that is true because she did alter the original signature, which included a date, by adding a location, and didn’t reveal she had did so until questions arose. Then after Politifact raked the story as false, Facebook, who at the time used Politifact as a “fact checker” downranked the article so that it was not easily found unless someone went directly to the GP page and scrolled to find it.

Gateway Pundit noticed the downranking and wrote about it, “Facebook Picks Sides in Alabama Senate Race=> Shuts Down Gateway Pundit and Breitbart Reports on Discredited Allred Accuser,” which was when Politifact declared that as false, because in the story, GOP wrote “The far left website Politifact said our story was not accurate and Facebook (then) shut it down. No one will be able to see our story on Facebook.”

They ranked it false because of the claim “no one” will be able to see our story, but as we have documented time and time again, posts that used to reach tens of thousands of people, once downranked, is seen by hundreds or less than a thousand, and that doesn’t even include the loss of reach from their constant “algorithm changes” which censors conservative news.

Sure, GP exaggerated, but they didn’t lie, because when posts used to receive tens of thousands of hits and all of a sudden can barely reach a couple of hundred, it does seem like no one is able to see it anymore.

Compare that exaggeration to the recent slew of “fake news” stories pushed by the MSM, such as the “racist MAGA hat” wearing Covington Catholic Students “surrounding” and “taunting, ” and “mocking” an elderly Indian man, the media spent weeks attacking, to which now we find out the students did none of which, as concluded by an independent investigative firm, which the media downplayed.

Or even the huge media mob story about the Empire actor Jussie Smollett who claimed he was attacked by two white men, who yelled “This is MAGA country,” which more and more is appearing to have been a huge hate hoax by Smollett, two of his black friends, who have just been arrested, with the false narrative pimped with the help of the liberal media.

The point here is we have to wonder why Google is now telling anyone that tries to click a link to Gateway Pundit, contained within a Disqus notification email, that it is an “untrusted site.”

Untrusted by who? Those that do not believe in Americans being able to read unfiltered news or opinion? The liberals that run Google’s Gmail?

For months now, other comments coming from Disqus to my Gmail, when I try to reply to a comment on our own thread by clicking the reply option in the Disqus notification, gives another “suspicious link” warning, saying “This link has been flagged as suspicious. Are you sure you want to proceed to disq.us?, with the same options to proceed or go back.

Newsletters are being flagged as unsafe content that one has to hit  the “Ignore, I trust this message” button,  yet no matter how many times we click that button, Gmail continues to put the large red warning box above them. At the time gmail started flagging our newsletters we were seeing nearly 2,500 to 3,000 viewed, which went decreased dramatically after this new Gmail flag, to between 1,200 to 1,500 viewed.

We are not the only ones that this is happening to, as a search finds quite a few stories and images, showing Gmail has been doing this for years to certain emails.

What this indicates to me is a desire on the part of big tech to “scare” Independent Media readers into not interacting with each other, or “scaring” them away from opening a newsletter they have subscribed to and confirmed via email, before ever receiving one.

Add into that the Newsguard plugins, now being loaded into Microsoft products, and available for browsers like Mozilla and Google Chrome, that pushes a red warning for conservative media, while giving the “green” light to liberal media complex, and we are seeing big tech tightening the reins, with what I call stealth censorship.

Harmeet Dhillon, from the Republican National Lawyers Association, addresses the people NewsGuard claims is “safe”,” in an op-ed over at The Daily Caller.

Who are the approved “green check mark” news sources? The left-leaning, establishment media outlets you would expect: CNN, The Huffington Post, The Washington Post, and so on. These are the same sites that rushed to publish dozens of demonstrably false stories about Catholic high schoolers harassing a Vietnam veteran — and wound up putting those teenagers and their families in the crosshairs of a vicious internet hate mob — and then, largely refused to apologize for getting the story completely wrong.

Other members of the “good news” club include Rolling Stone, responsible for making a cover story out of the most destructive rape hoax since the Scottsboro Boys, and BuzzFeed News, responsible for the report accusing President Trump of committing a felony by allegedly telling Michael Cohen to lie to Congress. The story was so outrageously false that Special Counsel Robert Mueller’s office issued a rare public statement to disavow it.

Which media sources are arrayed on the other side of this equation, the “bad news” bears designated on NewsGuard with red exclamation points? Exactly who you’d expect: Breitbart News; Drudge Report; the Daily Mail, Britain’s third-largest newspaper; and other outlets popular outside the Acela corridor.

In the end, this scheme is really no different than the dubious “fact checks” that holier-than-thou establishment media outlets have used to belittle their competitors and silence people who see the world a little differently than the folks in newsrooms in New York, Washington, and Los Angeles.

On February 11, 2019, Mike Adam’s over at Natural News revealed that Apple has threatened to block the Natural News app from all Apple devices if he didn’t stop writing about abortions and Satanism. Prior to that Luara Loomer was cut off from being able to accept paypal donations, wo which she bluntly stated “They want me to die.” 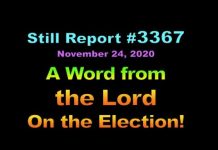