Last night, ABC aired the classic animated Peanuts special A Charlie Brown Thanksgiving, and while many fans tuned in for the warmth of nostalgia to kick off their holiday season, many came away with a less than fuzzy feeling when it came to how one specific character was treated.

Liberals are a lot of things, but don’t ever accuse them of being smart. Because they’re not. Why do I say this? Because this year, the collective brain pool of snowflake Libs have decided that the treatment of Franklin, the lone black character in the ‘Charlie Brown: Thanksgiving’ special is racist, and they are calling on ABC to stop airing this beloved program. If those fluttering snowflakes only knew a little history, they would be praising Charles Schultz instead of condemning him.

After the death of Martin Luther King, a retired white, Jewish school teacher from Los Angeles named Harriet Glickman began corresponding with Peanuts creator Charles Schultz, and asked him if he would consider adding a black character to the Peanuts gang. Long story short (see the full story in below video), Schultz added the character of Franklin, and he had to fight tooth and nail against the Hollywood establishment to do it. Students of history will recall how bad the race riots of the 1960’s and early ’70’s were. Charles Schultz was not only brave to include Franklin, he was a pioneer in furthering racial harmony in America by doing what he did.

But 2018 snowflake Liberals, who go to college on daddy’s dime, drink Starbucks and spend thier days trying to figure out what gender they are, haven’t the foggiest idea of how Franklin came to be or why his inclusion at the table was such a landmark event. They are so consumed by their hated of America, they can’t see straight. They see Franklin sitting at the table and cry ‘racism’ over his placement, failing to ever consider that his inclusion at the table was nothing short of miraculous!

You were a good man, Charlie Schultz.

FROM COMIC BOOK: The special centers around a somewhat impromptu holiday meal that happens when Peppermint Patty invites herself and several others over to Charlie Brown and Sally’s house for Thanksgiving despite the fact that they’re preparing to go to their grandmother’s for the feast. After a little help from Linus, who convinces Charlie they can have two Thanksgivings, as well as Woodstock and Snoopy who do the cooking, a friends’ Thanksgiving is on. 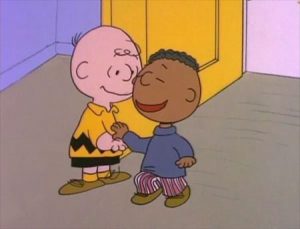 Franklin was a beloved member of the ‘Peanuts’ gang.

The meal consists of buttered toast, pretzel sticks, popcorn, jelly beans, and an ice cream sundae — is served at a table in the backyard, and while all’s well that ends well with everyone ending up invited to Charlie and Sally’s grandmother’s meal, it’s the seating arrangements at this unusual dinner that has some fans on social media heated.

Franklin, the one and only black friend in the group, is seated by himself on one side of the table while the other is crowded with the rest of the friends.

On top of that, he’s sitting in a lawn chair as opposed to everyone else’s proper furniture.

It’s… not a good look, which viewers were quick to point out. Many felt the scene was in bad taste at a minimum and racist at worse, with most settling into the idea that the special simply hasn’t aged well. A Charlie Brown Thanksgiving first aired on November 20, 1973 on CBS where it aired every year until 2000. In 2001, it moved to ABC with the rest of the Peanuts specials and has continued to air annually. READ MORE