Throughout the scandals, Facebook was clad in Teflon and nothing mattered. But today, it mattered.

Facebook shares plunged 23% to $169 in late trading today, after successfully dodging the impact of various scandals the company has been embroiled in recently over its horrendous privacy practices, including disclosures that political analytics firm Cambridge Analytica, now defunct, had improperly accessed data from about 87 million Facebook users. This led to the world being served up the spectacle of CEO Mark Zuckerberg testifying before Congress in early April.

Facebook was clad in Teflon at the time, and none of this mattered [Then Why Is Anyone STILL on Facebook?]. But today, it mattered.

Wall Street wasn’t happy with revenues that, at $13.2 billion, were a tad weaker than expected, and with a warning that sales growth – a blistering 42% in Q2 compared to a year ago – would slow sharply in future quarters.

DAU in the US and Canada, at 185 million, were flat compared to Q1, and up just a notch year-over-year.

DAU in Europe, at 279 million, dropped 1% from Q1, a debacle that CFO David Wehner said was “due to the GDPR” — the EU’s privacy laws that came into effect in the quarter.

On a year-over-year basis, the DAU and MAU metrics rose 11%, and that would be fine for lesser gods, but not for Facebook.

When earnings and user-growth data first came out, shares dropped 7%. But during the earnings call, Wehner said that revenue growth would experience high single-digit drops each quarter for the next few quarters.

He blamed the dollar, adding “new experiences,” and having to back off its horrendous privacy practices:

“In terms of what’s driving the deceleration, it’s a combination of factors. First of all, there’s currency that’s going from a tailwind to a modest headwind. Secondly, we’re going to be focusing on growing new experiences like Stories . . . and that’s going to have a negative impact on revenue growth. And we’re giving people who use the service more choice in terms of privacy.”

This was when shares came unglued and plunged 23%. And Facebook’s market capitalization, at $621 billion before the market closed, plunged by $143 billion.

Facebook remains immensely profitable because it knows its users better than anyone else knows them, has figured out how to target these users, sometimes in a spooky manner, and pitches this to advertisers. Average revenue per user in all markets rose. In the US and Canada, it rose nearly 10% to $25.91.

There is another astounding number in the earnings report: “Headcount” at the end of June was 30,275 – “an increase of 47% year-over-year,” it said. Let that sink in for a moment. 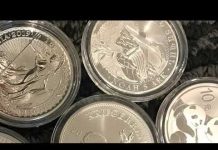 Silver and Gold: Fundamentals as Strong as Ever