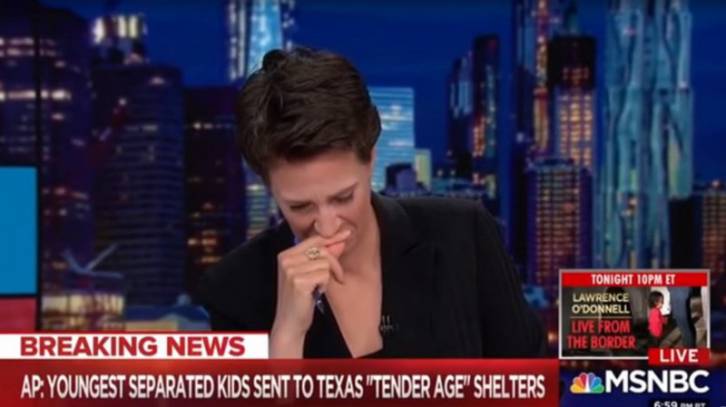 Last night Rachel Maddow finally took a break from her relentless warmongering toward Russia, Syria and North Korea to have a pretend cry about the plight of immigrant children on her hit MSNBC show.

It was arguably the climax of a loud nationwide outcry against a federal policy of separating parents from their children when they are arrested for illegally crossing the border from Mexico into the United States, and the following day President Trump signed an executive order suspending that policy while Congress comes up with some less draconian legislation.

And of course the entire thing was phony from top to bottom. The policy Trump’s political opponents have been blaming on the current administration was actually bipartisan and several administrations in the making, and as with many US policies simply grew progressively more depraved with each new president.

The executive order leaves the debate over many, many immigration issues still unresolved, including the fact that it just means families will now be imprisoned together under Attorney General Jeff Sessions’ new “zero tolerance policy”, and the fact that thousands of families will still remain separated. And of course the entire furor only became a mainstream issue because midterm elections are coming up and the “Russia, Russia, Russia” platform of the last year and a half hasn’t exactly energized the Democratic party’s base.

And of course that soulless (expletive deleted) Maddow, who will cheerfully help inflame tensions between nuclear powers in order to give her ratings a bump, was 100 percent acting throughout the entire scene.

But you know what? I’ll take it.

I don’t normally comment on US immigration policy. My haters are always whining that I, an Australian, focus so much on American politics, but believe it or not I do have a strict personal code for the sorts of things I do and do not write about. I focus on the US because it is clearly the focal point of the transnational power establishment which uses its military and economic might to bully the rest of the world into supporting omnicidal, ecocidal plutocratic agendas, but as a strong proponent of sovereignty I do try to stay in my area and only write about things which directly or indirectly impact my part of the world.

That said, I think I can safely say from within my sovereign boundaries that if the Democratic Party were to spend spend June through November campaigning on immigrants’ rights rather than on starting World War 3, the rest of the world will breathe a huge sigh of relief.

Trump-induced amnesia has erased much of the memory of this, but Democrats haven’t always been so goddamn terrifying. They’ve always been phony, and they’ve always been the other half of America’s oligarchic military-industrial complex problem, but before they lost their marbles in 2016 they did at least try to pretend to be vaguely progressive sometimes instead of basing their entire platform on attacking political opponents for trying to get along with Russia or North Korea.

A reversion to the way things used to be, when Rachel Maddow was just a garden variety partisan hack instead of a psychotic amalgamation of all the worst aspects of Glenn Beck, Alex Jones and Joseph McCarthy, would be a welcome relief.