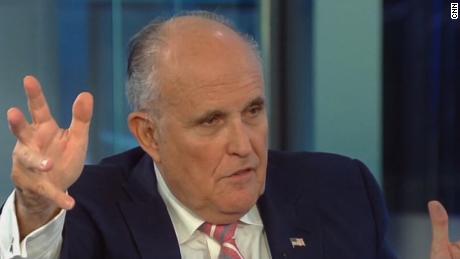 What Rudy Giuliani, the former mayor of New York City and Donald Trump’s latest legal fixer did last night was to effectively tell Trump’s mortal enemy, the Washington Post, that Trump paid his personal lawyer, Michael Cohen, a $420,000 slush fund last year to clean up dirt on the President. Cohen is the target of a criminal investigation by the U.S. Attorney’s office for the Southern District of New York. Cohen’s home, office, hotel room and safety deposit box were raided by the FBI on April 9.

In an interview with Sean Hannity of Fox News last evening, and then later with the Washington Post, Giuliani buried both himself and the President deeper into a web of half truths or outright lies while managing to taint the legal work he does at his law firm, Greenberg Traurig, a corporate law behemoth with 2,000 lawyers in 38 offices on three continents.

By the end of the evening one thing was clear – Giuliani had concocted such a shifting, nebulous alibi for Trump that it didn’t even hold up to a few hours of media scrutiny let alone a future interview with a Federal prosecutor.

The explosive social media controversy that ensued over the Giuliani interviews centered on the fact that on April 5 the President had stated flatly “no” when asked if he was aware of the $130,000 payment that Michael Cohen had made to porn star Stormy Daniels as hush money over her allegations that she and Trump had had a sexual relationship. A reporter also asked Trump “do you know where he got that money to make that payment.” Trump responded, “No, I don’t know.” Trump’s April 5 statement was made to reporters aboard Air Force One and widely carried on cable news programs. Cohen has admitted to making the payment in the days leading up to the presidential election of 2016.

The payment has important legal jeopardy ramifications for both Cohen and Trump. A hush money payment just days before his presidential election can be viewed under campaign finance law as a payment to protect his campaign from political damage. Under federal campaign finance law, any expenditures by a candidate or someone working on behalf of a candidate must be reported to the Federal Election Commission (FEC). No such filing has been made.

In a complaint filed in January by Common Cause with the FEC and the Department of Justice, the organization charges that the failure to report this expenditure to the FEC violates not only campaign finance law but also violates federal law prohibiting false statements of material fact to the Federal government.

Giuliani’s efforts last evening to unsnarl Trump from this mess only seemed to compound the mess. Regarding the $130,000 payment to Daniels, the exchange went as follows on the Sean Hannity program on Fox News:

Giuliani: They funneled through a law firm, and the president repaid it.

Hannity: Oh. I didn’t know that. He did.

Then, potentially impairing his daytime job at Greenberg Traurig, Giuliani volunteered this to Hannity:

“I take care of things like this for my clients. I don’t burden them with every single thing that comes along. These are busy people.”