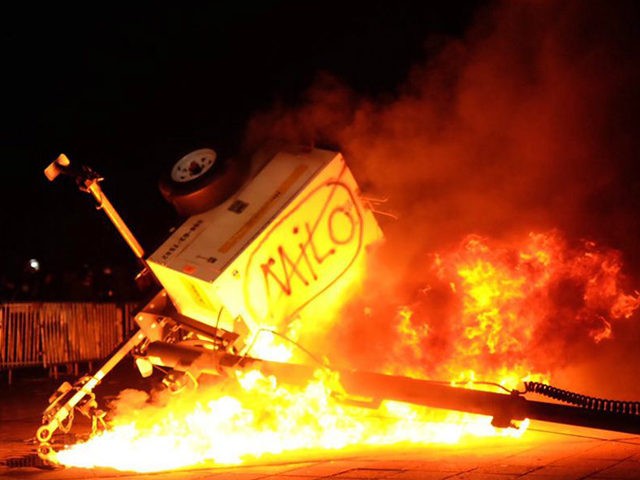 The University of California Berkeley has conducted an investigation of problems related to free speech on campus — particularly surrounding events where conservatives (or even insufficiently left-wing “progressives”) are invited to speak on campus and met with violence and disruption by left-wing activists.

Bizarrely, the report of the Commission on Free Speech concludes that conservatives, not the left, are to blame for the violence on campus.

In one passage, the report states: “[O]ur conclusion is that the rise of ultra-conservative rhetoric, including white supremacist views and protest marches, legitimized by the 2016 presidential election and its aftermath, encouraged far-right and alt-right activists to ‘spike the football’ at Berkeley.”

It insists: “Contrary to a currently popular narrative, Berkeley remains a tolerant campus.”

And it blames student groups who invite conservative speakers onto campus, while simultaneously denying that Berkeley is denying conservatives their free speech rights:

All the 2017 events that led to disruption were sponsored by very small groups of students working closely with outside organizations. Although those speakers had every right to speak and were entitled to protection, they did not need to be on campus to exercise the right of free speech. Indeed, at least some of the 2017 events at Berkeley can now be seen to be part of a coordinated campaign to organize appearances on American campuses likely to incite a violent reaction, in order to advance a facile narrative that universities are not tolerant of conservative speech.

While insisting that the commission does not condone the sort of violence that greeted then-Breitbart Tech editor Milo Yiannopoulos last year, the commission warned students against inviting speakers with provocative views:

That said, the Commission recommends that all members of the campus community be mindful of one another and do unto others as they would want done to themselves. There are better ways to expand the political dialogue on campus than to invite a shock jock performance artist, as Professor Rossman characterized Yiannopoulos, to belittle historically oppressed communities.

The report said that student organizations should be “balancing their right to hold events with their responsibility to the community.”

They have plenty of harsh words, however, for the conservatives who were targeted. “Many Commission members are skeptical of these speakers’ commitment to anything other than the pursuit of wealth and fame through the instigation of anger, fear, and vengefulness in their hard-right constituency.” Their invitations to speak represented “the assertion of individual rights at the expense of social responsibility by a handful of students.” As a result, the commission finds speech of this kind “hard to defend, especially in light of the acute distress it caused (and was intended to cause) to staff and students.”

In the report, conservatives are active, provoking and triggering. The left-wing activists who set things on fire appear in passive voice, that great grammatical machine for sanitizing the indefensible. Left-wing groups have reasonable fears for their safety from conservative speakers, and the police needed to defend them (from what? Further deponent sayeth not.) Conservative students “allege” that their beliefs make them targets for left-wing professors. And when it comes to the remedies, it’s clear who the commission thinks ought to change their ways.