Donald Trump has declared war on the free market, taking to Twitter again to bash Amazon for doing what he infamously and righteously did for decades: avoid paying extortion.

It seems Darth Hater is hellbent on forcing the wildly-successful e-retailer to fork up their profits because they used the notoriously inefficient and bankrupt Post Office to deliver goods to their millions of customers.

Before Trump was (s)elected, I said that he would win the (s)election after it came out that both he and Killary were invited to an exclusive Jesuit function with Henry Kissinger following one of their fake debates.

Then, when he was publicly (s)elected as President, I warned he would be no different than Barack Drone Bomber or Killary Clinton. 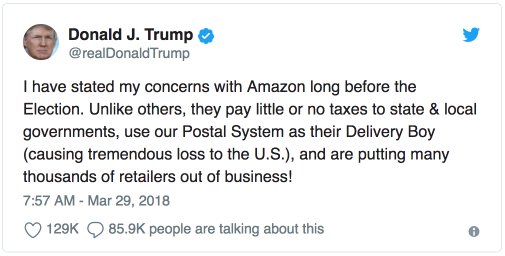 Trump did fool quite a few people though, including Stefan Molyneux, who was formerly known as a principled anarchist, but fell into the phony left/right narrative and became a statist-sympathizing Trumpite.

Even Stefan is now coming to terms with the truth though: 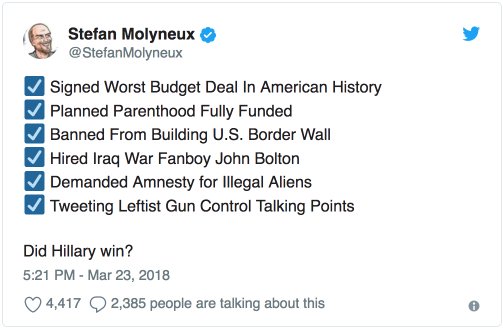 Many Trump supporters claimed, based on The Donald’s own words and tweets, that he was pro-gun, anti-war, anti-big government and would reduce the US deficit.

Reality has been quite the opposite, though, as we said it would be.