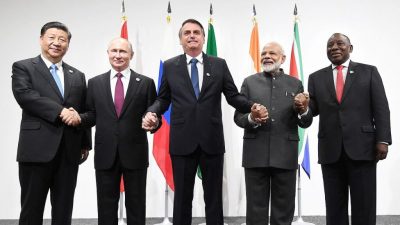 It is very curious timing in this article from Newsweek, containing massive geopolitical implications, using identified Saudi Arabia sources, would come in advance of Joe Biden’s visit to the Kingdom of Saudi Arabia.

Is this strategic geopolitical pressure from Saudi leader Mohamed Bin Salman (MbS) ahead of the meeting with Biden; or is this a genuine possibility that looms as likely?  If the former, then Joe Biden is being geopolitically slow roasted by Saudi Arabia for his previous disparagements and ideological hypocrisy in his visit.  If it is the latter, well, then the tectonic plates of international trade, banking and economics are about to shift directly under our American feet. 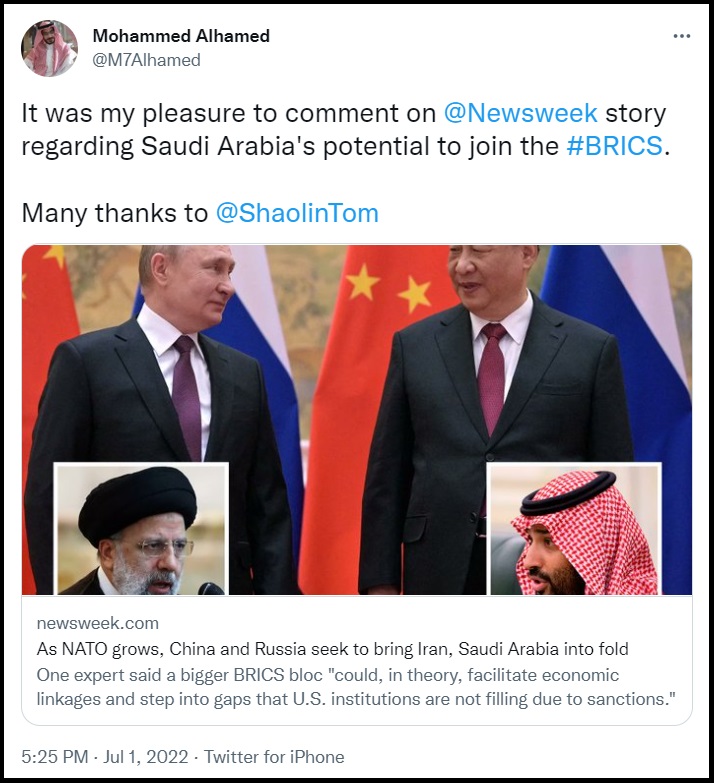 We have been closely monitoring the signs of a global split around the energy sector taking place.  Essentially, western governments’ following the “Build Back Better” climate change agenda which stops using coal, oil and gas to power their economic engine, while the rest of the growing economic world continues using the more efficient and traditional forms of energy to power their economies.

This article from Newsweek is exactly about this dynamic with Saudi Arabia now potentially joining the BRICS team.

NEWSWEEK – Finland and Sweden’s green light to join NATO is set to bring about the U.S.-led Western military alliance’s largest expansion in decades. Meanwhile, the G7, consisting of NATO states and fellow U.S. ally Japan, has adopted a tougher line against Russia and China.

In the East, however, security and economy-focused blocs led by Beijing and Moscow are looking to take on new members of their own, including Iran and Saudi Arabia, two influential Middle Eastern rivals whose interest in shoring up cooperation on this new front could have a significant impact on global geopolitical balance.

Towards a Multi-Polar World? Geopolitical Resetting. The Russia-China Axis. BRICS PLUS Versus Group of Eight (G-8)

The two bodies in question are the Shanghai Cooperation Organization (SCO) and BRICS. The former was established in 2001 as a six-member political, economic and military coalition including China, Russia and the Central Asian states of Kazakhstan, Kyrgyzstan and Tajikistan before recruiting South Asian nemeses India and Pakistan in 2017, while the latter is a grouping of emerging economic powers originally consisting of Brazil, Russia, India and China (BRIC) upon its inception 2006, and including South Africa in 2010.

Here is the money quote:

[…] “China’s invitation to the Kingdom of Saudi Arabia to join the ‘BRICS’ confirms that the Kingdom has a major role in building the new world and became an important and essential player in global trade and economics,” Mohammed al-Hamed, president of the Saudi Elite group in Riyadh, told Newsweek. “Saudi Arabia’s Vision 2030 is moving forward at a confident and global pace in all fields and sectors.”

[…] “This accession, if Saudi joins it, will balance the world economic system, especially since the Kingdom of Saudi Arabia is the largest exporter of oil in the world, and it’s in the G20,” Hamed said. “If it happens, this will support any economic movement and development in the world trade and economy, and record remarkable progress in social and economic aspects as Saudi Arabia should have partnerships with every country in the world.” (read more)

That would essentially be the end of the petrodollar, and -in even more consequential terms- the end of the United States ability to use the weight of the international trade currency to manipulate foreign government.  The global economic system would have an alternative.  The fracturing of the world, created as an outcome of energy development, would be guaranteed.

Keep in mind, in early June Federal reserve Chairman Jerome Powell stated, “rapid changes are taking place in the global monetary system that may affect the international role of the dollar.”  {LINK}

The western alliance (yellow) would be chasing climate change energy policy to power their economies.  The rest of the world (grey) would be using traditional and more efficient energy development.  The global cleaving around energy use would be complete.

This is not some grand conspiracy, ‘out there‘ deep geopolitical possibility, or foreboding likelihood as an outcome of short-sighted western emotion.  No, this is just a predictable outcome from western created events that pushed specific countries to a natural conclusion based on their best interests.

You can debate the motives of the western leaders who structured the sanctions against Russia, and whether they knew the outcome would happen as a consequence of their effort, but the outcome was never really in doubt.  Personally, I believe this outcome is what the west intended. The people inside the World Economic Forum are not stupid – ideological, yes, but not stupid. They knew this global cleaving would happen.

For a deep dive on BRICS, as predicted by CTH, {SEE HERE}.  The bottom line is – the 2022 punitive economic and financial sanctions by the western nations’ alliance against Russia was exactly the reason why BRICS assembled in the first place.

BRICS leaders are aligned as anti-corporatist.  That doesn’t necessarily make those government leaders better stewards, it simply means they want to make the decisions, and they do not want corporations to become more powerful than they are.  As a result, if you really boil it down to the common denominator, what you find is the BRICS group are the opposing element to the World Economic Forum assembly.

The BRICS team intend to create an alternative option for all the other nations. An alternative to the current western trade and financial platforms operated on the use of the dollar as a currency.  Perhaps many nations will use both financial mechanisms depending on their need.

The objective of the BRICS group is simply to present an alternative trade mechanism that permits them to conduct business regardless of the opinion of the multinational corporations in the ‘western alliance.’