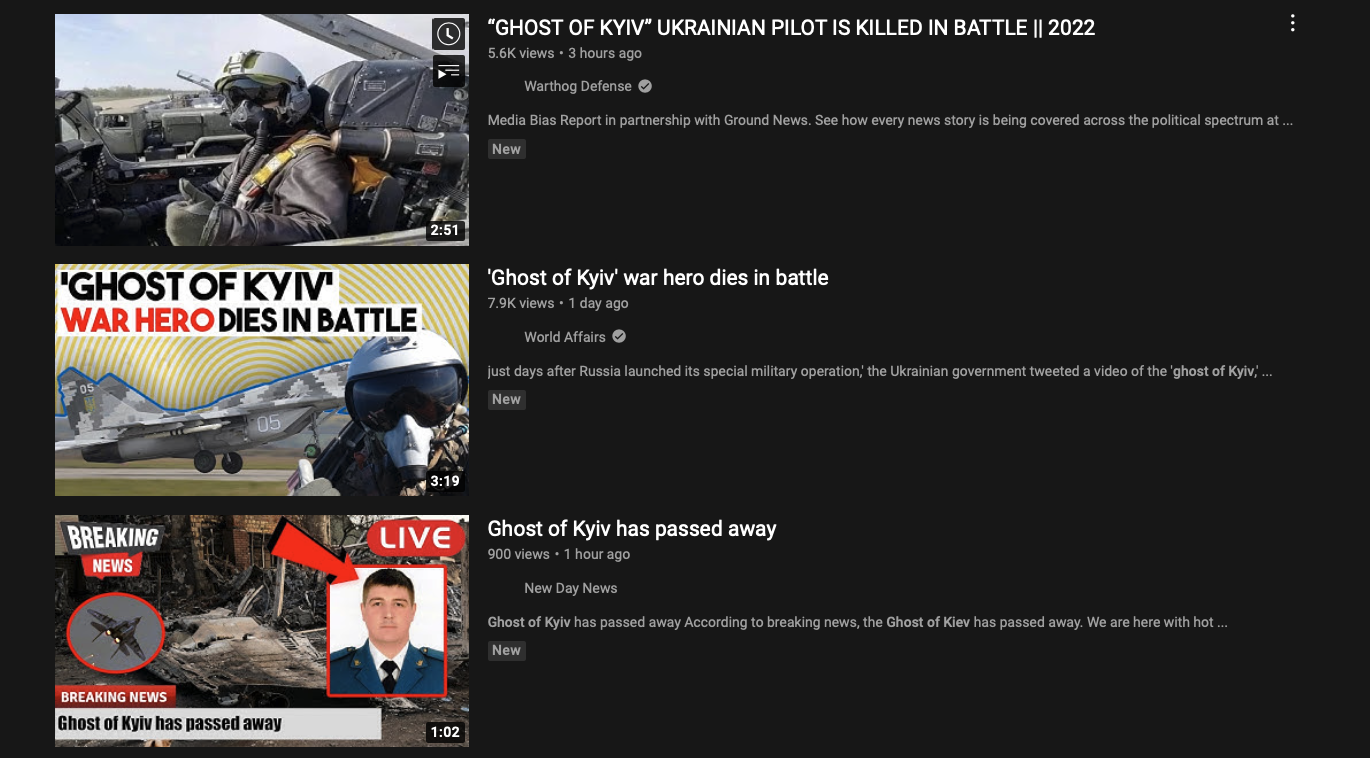 Fox News, the keepers of KEEV, stand humiliated by truth. What will be revealed next?

What follows is a direct reprint of a piece that was written by David Axe and appeared in Forbes Magazine on April 30th. The Ghost of Kyiv / Keev / Keef / Kiev, etc. never existed.

Think of this. This bit of fake news was all over supposedly truth-telling Fox News of all places, and I remember watching anchor after anchor on that network falling all over themselves talking about the great exploits of this mythical fighter pilot, credited at the end of his mythical life with 40 kills.

In my piece here, Kim Iversen and The Hill exposed this as a fake, but who pays attention to “alternate media?” But now, it is in Forbes, and Forbes is not exactly Alex Jones, now, is it? Or that terrible Russian-financed rag, The Duran? Nope, it ain’t us either (and I am the only member of the Duran team that is actually in Russia – the site is based in Cyprus, not in Moscow!)

This piece still tries to hold the pro-Ukrainian stance, as you will see. And, maybe, sans the Ghost, its information is slightly more accurate. However, a wise reader in the affairs of this war probably ought not trust even some of the Ukraine-positive narrative that remains. What can be said is that the Ghost of Kyiv was a lie that became unsustainable, and when it did so, as you will see, even there the Ukrainians tried to recast this story as an idea – in other words, folks, it was always just an idea. Whoever said this was a real person! What, are you stupid?

So, here, we are calling BS on not only the Ghost of Kyiv story but also that the narrative of the Forbes piece is likely still to be factually far from accurate. Only time will tell, but look what time is telling us so far!

At any rate, it seemed a good idea to get this piece rebroadcast to all of you who may not have seen it or heard about it. It begs the question: How much of the rest of the Ukrainian narrative is fake? Probably, a great deal of it, especially as Ukrainian sources are now starting to say that the loss of the Donbass “doesn’t mean that Ukraine cannot win the war…”

Very interesting how that works out, isn’t it? Well, have fun with the Forbes piece. Here it is.

The ‘Ghost Of Kyiv,’ Who Was Never Real, Just Got Killed In The Press

The Ghost of Kyiv was a Ukrainian fighter pilot. A lone warrior in the aerial defense of Ukraine’s embattled capital city in the early weeks of the Russian invasion.

Deftly maneuvering his 30-year-old, twin-engine MiG-29, the Ghost jealously guarded the sky over Kyiv. Fighting against the odds with antiquated weaponry, he shot down 40 Russian warplanes before finally succumbing to enemy fire three weeks into the war.

The Ghost of Kyiv, real name Stepan Tarabalka, died in the cockpit of his trusty MiG on March 14, The Times reported.

Just one problem. The Ghost of Kyiv legend isn’t true. Even the Ukrainian air force, which once sort of embraced the tale, admitted so after The Times’ baseless story on the Ghost’s demise went viral on Saturday.

“The information about the death of the Ghost of Kyiv is incorrect,” the air force tweeted. “The Ghost of Kyiv is alive, it embodies the collective spirit of the highly qualified pilots of the tactical aviation brigade who are successfully defending Kyiv and the region.”

“Ghost of Kyiv is a superhero legend whose character was created by Ukrainians!” the air force added on Facebook.

The Ghost, in other words, is an idea. Not a MiG pilot named Tarabalka who singlehandedly shot down twice as many planes as outside analysts can confirm Moscow has lost in more than two months of bitter fighting.

Tarabalka, who reportedly was 29 at the time of his death, reportedly was a real person. But he did not shoot down 40 Russian planes. Leaving aside the air force’s denials, there’s simply no evidence.

Warplane kills aren’t hard to prove over Ukraine. Daytime shoot-downs often are visible from the ground—and just as often recorded and made public. Ukraine after all is teeming with literally tens of millions of smartphone cameras with easy access to social media.

It’s not for no reason that open-source-intelligence analysts, such as the bloggers at Oryx, often find overlapping visual evidence—videos and photos—to confirm the outcome of any observed aerial engagement. It might take a few weeks, but evidence usually surfaces.

THE DEEP STATE PEDO FIX IS IN, AGAIN. — JUSTIN O’CONNELL