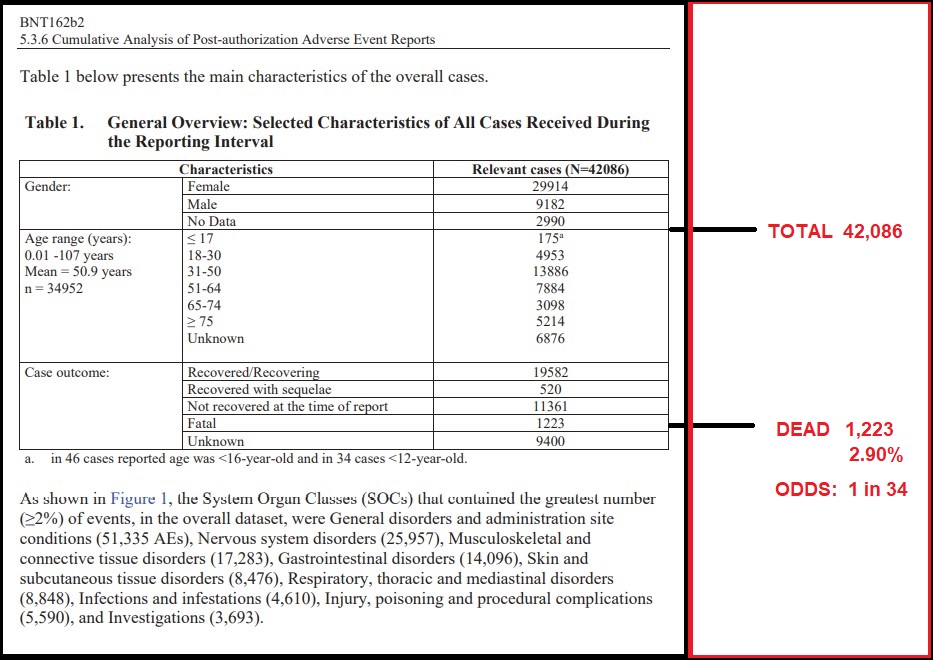 A group of medical researchers filed a FOIA request for the documents the FDA relied upon to approve the Pfizer vaccine.  There are approximately 330,000 pages of documents from the Emergency Use Authorization process and trial.  The FDA responded by saying they did not want to provide the documents or the data. A lawsuit was triggered.

The FDA said they would produce batches of 500 documents per month that will take 55 more years for full production {LINK}.  A judge ordered a timed release of the data, and two months after the lawsuit was filed, the first release took place two weeks ago. The FDA produced the first 91 pages of the more than 329,000 pages potentially responsive to the FOIA request. The findings, taken directly from the produced documents, are cited here and discussed below.

The time period covered (‘reporting interval’) is from December 1, 2020, to February 28, 2021, approximately three months of data from the FDA, showing adverse events (AE) from the vaccine rollout.   “It is estimated that approximately [REDACTED] doses of BNT162b2 were shipped worldwide from the receipt of the first temporary authorisation for emergency supply on 01 December 2020 through 28 February 2021,” the document states.

The total number of vaccinations during the three months is unknown.

QUESTIONS:  How many vaccinations did Pfizer distribute globally *after* February 28, 2021?

Was the scale of Pfizer vaccine distribution significantly higher after the initial period discussed above?

If all of this government mandated vaccination activity is being done “for the public good“, why are those same government officials not publicly transparent with the vaccination data?  What information is needed in order to create “informed consent”?