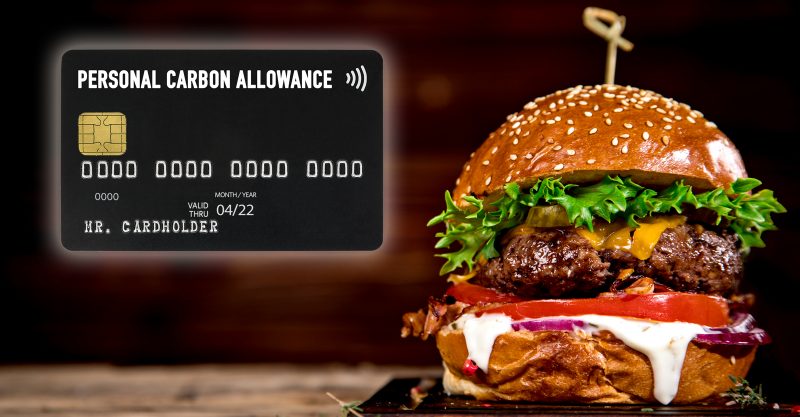 The desire to preserve the environment and protect future generations is largely universal, but are Personal Carbon Allowances and a system of surveillance capitalism, with tremendous controls over human behavior, the way to accomplish this objective?

It’s lunchtime and you’re hungry. You step into a local restaurant to grab a hamburger. As you are about to complete the transaction — via credit card as society has abolished cash — you are informed you have exceeded your carbon credit for the month.

Your purchase is declined. No hamburger for you.

If this seems far-fetched, just consider that less than two years ago, lockdowns, universal mask-wearing and so-called “health passports” also would have appeared, to most, to be the subject of a dystopian science-fiction thriller.

The impetus for the “no hamburger for you” scenario stems from proposals, increasingly popular in scientific and policymaking circles, for the implementation of “personal carbon allowances” (PCAs).

The PCA concept itself is not new. In 2008, for example, the UK government examined a proposal for PCAs as a means of reducing emissions.

However, the COVID pandemic, and the extraordinary measures implemented in response to it, may have helped lay the groundwork for public acceptance of the PCA scheme.

An August 2021 article in Nature, “Personal Carbon Allowances Revisited,” made precisely this point. The article directly connected the measures imposed during the pandemic with the argument in favor of PCAs.

The authors emphasized the “need for a low-carbon recovery from the COVID-19 crisis” via the use of PCAs, noting that during the pandemic, “restrictions on individuals for the sake of public health, and forms of individual accountability and responsibility that were unthinkable only one year before, have been adopted by millions of people.”

According to the article, “people may be more prepared to accept the tracking and limitations related to PCAs to achieve a safer climate and the many other benefits … associated with addressing the climate crisis.”

The authors also argued that “other lessons that could be drawn [from the pandemic] relate to the public acceptance in some countries of additional surveillance and control in exchange for greater safety.”

This latter quote may bring to mind the famous words of Benjamin Franklin: “Those who would give up essential liberty to purchase a little temporary safety deserve neither liberty nor safety.”

Subtitled “The timing might finally be right for this carbon-reduction strategy,” the article drew an analogy between PCAs and the types of allowances children receive from their parents.

What, exactly, is a PCA? The Nature article described it this way:

In other words, each individual would receive an equal allocation of carbon that they would be “entitled” to, and the consumption of which would be tracked.

In practice, this system would work like this, according to the Nature article:

“Allowances were envisioned to be deducted from the personal budget with every payment for transport fuel, home-heating fuels and electricity bills. People in shortage would be able to purchase additional units in the personal carbon market from those with excess to sell.”

This system can be compared to the pandemic-related measures imposed over the past 18-plus months, including the recent advent of digital “COVID passports,” where the unvaccinated are effectively barred from participation in numerous social activities, ranging from shopping to dining out.

In Lithuania, entry to supermarkets is prohibited for those who don’t have a digital “COVID pass.” Some Nigerian states have barred unvaccinated citizens from access to banks.

And in Pakistan, the mobile phone SIM cards of many unvaccinated individuals have been blocked.