Holiday selling season is going to be a mess: Look not for what you want but for what the store has.

The holiday selling season is approaching, and a whole litany of weird shortages is ricocheting through the economy. Stuff suddenly gets hung up somewhere, on a ship, or in a port, and then ends up somewhere else, or it’s on backorder for months, as manufacturers are struggling with material shortages and in in Asia with Covid outbreaks that shut down factories for weeks at a time.

And stimulus-fueled demand in the US has been huge and relentless, while retailers are struggling with inventories, some more than others.

Catastrophic shortages at auto dealers got even worse.

Auto dealers, particularly new-vehicle dealers, are experiencing catastrophic shortages of popular models, as automakers have been getting blasted by semiconductor shortages that simply refuse to abate, leading to rotating shutdowns of assembly plants globally.

Inventories at auto dealers, measured in dollars, declined to a new multi-year low of $151 billion in August, according to data released by the Commerce Department on Friday. 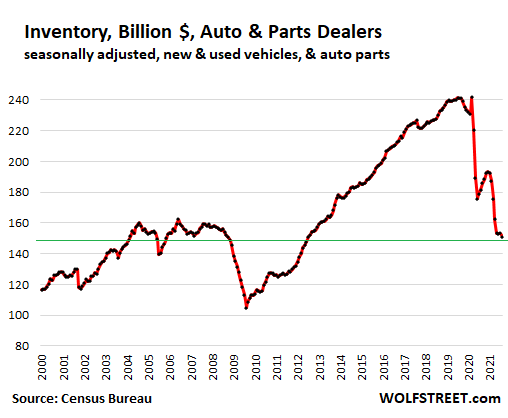 The long-term dollar-increase in inventory levels that you can see in the chart above is a reflection of higher costs per vehicle in inventory. But the number of vehicles in inventory has been in the same range for two decades, as unit sales have mostly been below the peak achieved in the year 2000.

It’s even worse during the current shortages: Inventory in dollars – though it collapsed – is being inflated by the shift to high-end models as automakers are prioritizing the biggest money makers.

Sales of new and used vehicles also collapsed as there hasn’t been enough to sell. The industry-standard Seasonally Adjusted Annual Rate (SAAR) of sales plunged five months in a row and is down by 33% from May:

And so the inventory-sales ratio – inventories divided by sales, a standard metric of supply that cancels out the impact of price increases – has been ticking up over the past three months from the May low, which had been the lowest in the data going back to 1992. The upticks were driven by sales that collapsed even faster than inventories: 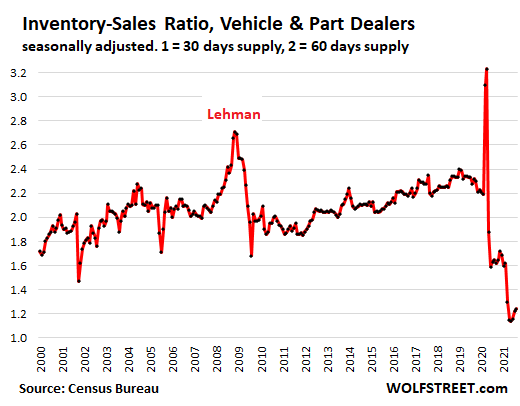 Following the Lehman bankruptcy, new vehicle sales plunged, and the US was suddenly drowning in inventory, and the inventory-sales ratio spiked.

During the pandemic, the opposite occurred: Fueled by huge amounts of fiscal and monetary stimulus, retail demand surged and collided with production woes due at first to Covid issues and then the semiconductor shortage. And prices have spiked, with many new vehicles being sold at prices well above sticker, which is nuts.

The empty-shelves syndrome of the spring 2020 is largely gone though there are surprising shortages of weird stuff here and there that you didn’t think a supermarket would ever run out of.

Retail sales at supermarkets remain at lofty levels, well above pre-pandemic levels, as consumption has shifted from the workplace and restaurants around the workplace to the supermarket. Food and beverage stores have increased their stocks, and prices have increased too, and in dollar terms, inventories rose to a record $54.5 billion in July and remained at the level in August.