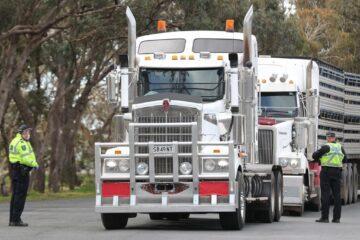 Australian truck drivers threatened a strike with a blockade on August 31 and actually engaged in a brief one on the 30th on the Queensland border, along with huge numbers of people protesting the unlawful mandates that truck drivers should get at least one of the unsafe and inefficient COVID shots.  This is a pretty big victory, as South Australian government has backpeddled on their mandate, which just shows you they are not holding all the cards.  The people are holding them because they truly have the power not only to stop that, but to bring the tyrants trying to mandate such things to justice.

As The XYZ pointed out, the source of the “working conditions” dispute was the insane Covid restrictions and mandatory vaccination for crossing the Queensland border. It remains to be seen if the Queensland government will back down the way that the South Australian government has. It is also still unclear whether the promised truckie blockades across the country are happening or even happened.

What we can be sure of is that the threat of big blockades on August 31, the brief blockade on the Queensland border on August 30, the huge number of people who protested outside their local councils on August 31 and the stated aim of doing so in support of striking truckies, has resulted a tangible victory for the Australian people.

The South Australian government has backed down on mandating the jab for interstate truckies because truckies threatened to strike and people got out in the street to protest. This tells us that governments are wary of growing public anger and will back down if threatened with serious economic and political consequences.

Yesterday’s protests have taken a serious toll on people. There were mass arrests, mass fines, and completely unnecessary police brutality against people who were simply standing still in silence.

However, the lesson from this backdown from the SA government is that people power works. If people are prepared to endure a greater toll, freedom is attainable.

That’s exactly right!  And this is not just true for Australia where they are attempting to implement their demonic New World Order, but it’s true for every single country across the earth if only the people will stick together against a common evil enemy.

Of course, the Mockingbird, corporate-owned media tried to play it off that the backpeddling had nothing to do with the truckers stand.

Authorities have scrapped a plan to force truckies from high risk Covid areas to have at least one vaccine shot before entering South Australia.

The regulation, which was set to come into force on September 24, was designed to limit the spread of Covid-19 from truck drivers entering the state from Victoria, NSW or the ACT.