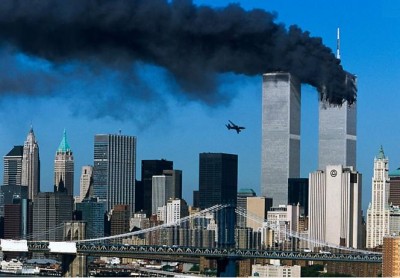 In subsequent developments, Porter Goss and Bob Graham took the initiative to demand the release of the 28 pages of their report which focussed on the role of Saudi Arabia in supporting the alleged 911 terrorists, A few years ago, these 28 pages were the object of debate.  They served as a distraction.

While the Joint inquiry (under the helm of Bob Graham and Porter Goss)  had collected mountains of intelligence material, through careful omission, the numerous press and intelligence reports in the public domain (mainstream media, alternative media, etc), which confirm that key members of the Bush Administration were involved in acts of political camouflage, were carefully removed from the Joint inquiry’s hearings.

In retrospect, the mission of Porter Goss and Bob Graham to Pakistan in late August 2001 (which was documented in my earlier writings) was part of the preparation of the propaganda campaign, with a view to sustaining the official narrative, i.e  “Al Qaeda was  behind the conspiracy to bring down the WTC towers, Muslims did it”, etc., which essentially sustains the official 9/11 narrative.

Starting in 2017, the propaganda campaign sought to “infiltrate” the 9/11 Truth movement by bringing in the notorious 28 pages. What occurred was that Al Qaeda did it, but they were supported by Saudi Arabia (according to the 28 pages), all of which is meant to dispel the fact amply documented that Al Qaeda did not have the ability to bring down the towers and that Al Qaeda has been supported from the outset by the CIA. The towers were brought down through controlled demolition.

The following text published by Global Research in 2002, provides details on the breakfast meeting hosted by Sen Bob Graham and Rep. Porter Goss on the morning of September 11.

In late August 2001, barely a couple of weeks before 9/11, Senator Bob Graham, Representative Porter Goss and Senator Jon Kyl were in Islamabad for consultations. Meetings were held with President Musharraf and with Pakistan’s military and intelligence brass including the head of Pakistan’s Inter Services Intelligence (ISI) General Mahmoud Ahmad. An AFP report confirms that the US Congressional delegation also met the Afghan ambassador to Pakistan, Abdul Salam Zaeef. At this meeting, which was barely mentioned by the US media, “Zaeef assured the US delegation [on behalf of the Afghan government] that the Taliban would never allow bin Laden to use Afghanistan to launch attacks on the US or any other country.” 1

Note the sequencing of these meetings. Bob Graham and Porter Goss were in Islamabad in late August 2001. The meetings with President Musharraf and the Afghan Ambassador were on the 27th of August, the mission was still in Islamabad on the 30th of August, General Mahmoud Ahmad arrived in Washington on an official visit of consultations barely a few days later (September 4th). During his visit to Washington, General Mahmoud met his counterpart CIA director George Tenet and high ranking officials of the Bush administration.2

On the morning of September 11, the three lawmakers Bob Graham, Porter Goss and Jon Kyl (who were part of the Congressional delegation to Pakistan) were having breakfast on Capitol Hill with General Ahmad, the alleged “money-man” behind the 9-11 hijackers. Also present at this meeting were Pakistan’s ambassador to the U.S. Maleeha Lodhi and several members of the Senate and House Intelligence committees were also present. This meeting was described by one press report as a “follow-up meeting” to that held in Pakistan in late August. “On 8/30, Senate Intelligence Committee chair Sen. Bob Graham (D-FL) ‘was on a mission to learn more about terrorism.’ (…) On 9/11, Graham was back in DC ‘in a follow-up meeting with’ Pakistan intelligence agency chief Mahmud Ahmed and House Intelligence Committee chair Porter Goss (R-FL)” 3 (The Hotline, 1 October 2002):

Saudi Arabia’s Alleged Involvement in the 9/11 Attacks and the 28 Pages: “Red-Herring”, Propaganda Ploy

“When the news [of the attacks on the World Trade Center] came, the two Florida lawmakers who lead the House and Senate intelligence committees were having breakfast with the head of the Pakistani intelligence service. Rep. Porter Goss, R-Sanibel, Sen. Bob Graham and other members of the House Intelligence Committee were talking about terrorism issues with the Pakistani official when a member of Goss’ staff handed a note to Goss, who handed it to Graham. “We were talking about terrorism, specifically terrorism generated from Afghanistan,” Graham said.

Goss could not be reached Tuesday [September 11]. He was whisked away with much of the House leadership to an undisclosed “secure location.” Graham, meanwhile, participated in late-afternoon briefings with top officials from the CIA and FBI.” 4

While trivializing the importance of the 9/11 breakfast meeting, The Miami Herald (16 September 2001) confirms that General Ahmad also met Secretary of State Colin Powell in the wake of the 9/11 attacks: “Graham said the Pakistani intelligence official with whom he met, a top general in the government, was forced to stay all week in Washington because of the shutdown of air traffic ‘He was marooned here, and I think that gave Secretary of State Powell and others in the administration a chance to really talk with him’. Graham said.”5

Again the political significance of the personal relationship between General Mahmoud (the alleged “money man” behind 9/11) and Secretary of State Colin Powell is casually dismissed. According to The Miami Herald, the high level meeting between the two men was not planned in advance. It took place on the spur of the moment because of the shut down of air traffic, which prevented General Mahmoud from flying back home to Islamabad on a commercial flight, when in all probability the General and his delegation were traveling on a chartered government plane. With the exception of the Florida press (and Salon.com, 14 September), not a word was mentioned in the US media’s September coverage of 9-11 concerning this mysterious breakfast reunion.

“A Cloak but No Dagger”

Eight months later on the 18th of May, two days after the “BUSH KNEW” headline hit the tabloids, the Washington Post published an article on Porter Goss, entitled: “A Cloak But No Dagger; An Ex-Spy Says He Seeks Solutions, Not Scapegoats for 9/11”. Focusing on his career as a CIA agent, the article largely served to underscore the integrity and commitment of Porter Goss to waging a “war on terrorism”. Yet in an isolated paragraph, the article acknowledges the mysterious 9/11 breakfast meeting with ISI Chief Mahmoud Ahmad, while also confirming that “Ahmad :ran a spy agency notoriously close to Osama bin Laden and the Taliban”:

“Now the main question facing Goss, as he helps steer a joint House-Senate investigation into the Sept. 11 attacks, is why nobody in the far-flung intelligence bureaucracy — 13 agencies spending billions of dollars — paid attention to the enemy among us. Until it was too late.

Goss says he is looking for solutions, not scapegoats. “A lot of nonsense,” he calls this week’s uproar about a CIA briefing that alerted President Bush, five weeks before Sept. 11, that Osama bin Laden’s associates might be planning airline hijackings.

“None of this is news, but it’s all part of the finger-pointing,” Goss declared yesterday in a rare display of pique. “It’s foolishness.” [This statement comes from the man who was having breakfast with the alleged “money-man” behind 9-11 on the morning of September 11]

(…) Goss has repeatedly refused to blame an “intelligence failure” for the terror attacks. As a 10-year veteran of the CIA’s clandestine operations wing, Goss prefers to praise the agency’s “fine work.”

On the morning of Sept. 11, Goss and Graham were having breakfast with a Pakistani general named Mahmud Ahmed — the soon-to-be-sacked head of Pakistan’s intelligence service. Ahmed ran a spy agency notoriously close to Osama bin Laden and the Taliban. 6 (Washington Post, 18 May 2002)

“Putting Two and Two together”

While the Washington Post scores in on the “notoriously close” links between General Ahmad and Osama bin Laden, it fails to dwell on the more important question: what were Rep. Porter Goss and Senator Bob Graham and other members of the Senate and House intelligence committees doing together with the alleged 9/11 “money-man” at breakfast on the morning of 9/11. In other words, the Washington Post report does not go one inch further in begging the real question: Was this mysterious breakfast venue a “political lapse”, an intelligence failure or something far more serious? How come the very same individuals (Goss and Graham) who had developed a personal rapport with General Ahmad, had been entrusted under the joint committee inquiry “to reveal the truth on 9-11.”(see p. )

The media trivialises the breakfast meeting, it presents it as a simple fait divers and fails to “put two and two together”. Neither does it acknowledge the fact, amply documented, that “the money-man” behind the hijackers had been entrusted by the Pakistani government to discuss the precise terms of Pakistan’s “collaboration” in the “war on terrorism” in meetings held behind closed doors at the State department on the 12th and 13th of September. 11 7(See Michel Chossudovsky, op cit)