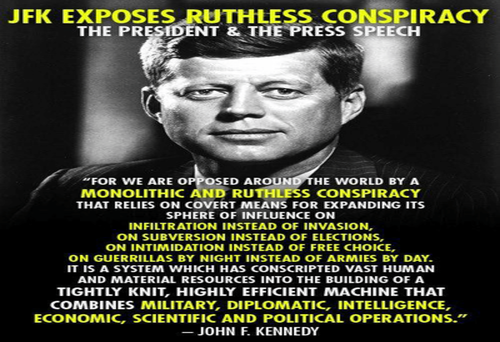 “Our way of life is under attack. Those who make themselves our enemy are advancing around the globe. The survival of our friends is in danger, and yet no war has been declared, no borders have been crossed by marching troops, no missiles have been fired. If the press is awaiting a declaration of war, before it imposes the self discipline of combat conditions, then I can only say that no war ever posed a greater threat to our security. If you are awaiting a finding of clear and present danger, then I can only say that the danger has never been more clear, and its presence has never been more imminent.

It requires a change in outlook, a change in tactics, a change in missions by the government, by the people, by every businessman, or labor leader, and by every newspaper. But we are opposed around the world by a monolithic and ruthless conspiracy that relies primarily on covert means for expanding its fear of influence, on infiltration instead of invasion, on subversion instead of elections, on intimidation instead of free choice, on guerrillas by night instead of armies by day.”

His precognition is superb, as we have witnessed so much of it the past few decades occurring right out in broad daylight egged on by those on the LEFT. And just who are the “LEFT”? That is what I intend to show, and please forgive me that I am so brief as I do not have a few thousand pages to devote, but only the allowance of a readable opinion column.

Although Secret Societies have existed since the dawn of time itself, with Cain beginning the first one to hide the murder of his brother Abel, they have been under our noses since then with Satan as the real head of them all. Lucifarian societies are very widely distributed around the world and have been for a long time with many of them known or suspected. Kennedy did not say exactly which secret societies he was referring to, but did leave some hints that the Order of the Skull and Bones was a major one. That makes sense, since he was involved with the Bay of Pigs fiasco of the CIA about a month earlier And the CIA and other intelligence agencies are loaded with them – think Bush Sr. in the CIA at that time for instance.

Let’s look at the primary ones destroying our nation today, starting with the Satanic Cult of Marxism. Although some dispute it, Satan IS Lucifer, one being more of a name, the other more of a title for the same being. Kind of like Jesus is the Christ, Lucifer is the Satan. One being the First Born of the Father (Rev 1:4) – THE “Son of the Morning”, the other pretending to be Like Christ, A “Son of the Morning”, a reference that he was one of the older Spirit sons of our God, an older brother to many of the Spirit children of God the Father that we are among as well, the whole of all mankind are Gods children including the “Third of heaven” that rebelled and got tossed out. They, the evil spirits that followed Lucifer, are at WAR with us and with God, and that is the very basis of all Secret Societies and the cause of all the hate and evil we see today.

A book, The Devil and Karl Marx by Paul Kengor, lays out the reason why Marxists seem so damned evil – they worship Satan whether they know it or not. Among interviews with him, this answer by the Author is enlightening: “We repeatedly encounter in the life of Marx the words that family members and close friends used referring to him. Phrases like “governed by a demon” (his father), “my dear devil” (his son), “monster of ten thousand devils” (Engels). See the striking number of intimates and associates who compared him to Faust or Mephistopheles. They used words like “possessed,” or “eyes like a wet goblin,” or “take under a spell,” to describe his demeanor.” This relationship with Lucifer is proven with well over one hundred million deaths by Marxists – COMMUNISTS – during the 20th century alone. We are on track to make that number look like a cakewalk shortly as Satan and his minions in those Secret Societies fight with all the might they can muster prior to the return of our rightful King that they think they can quash.

The Georgia Guide Stones mention the impending collapse of Society and “new solutions” waiting around the corner. In other words, the New World Order with far fewer people populating it, a fraction of our current numbers. Alexander Trachtenberg, Moscow’s “Enforcer” among American Communists stated “When we get ready to take the United States, we will not take it under the label of socialism…. We will take the United States under labels we have made very lovable; we will take it under liberalism, under progressivism, under democracy. But take it we will” sometime back in the 1950’s, and as JFK’s quote above, is very prophetic. These two ideas presented in this paragraph are not disconnected, but are directly associated. In his poem The Pale Maiden, Karl Marx wrote:

I know it full well.

My soul, once true to God,

Is chosen for Hell.”

Marx wrote a lot about Satan and God, he was preoccupied with it, knowing he was destined to live forever with his master, Lucifer, just as was Cain.

The real problems arose when Marxism changed from an unworkable idyllic economic philosophy to a cultural revolution that encompasses the whole of its innate evil. Pope Pius XI said “That We, in keeping with Our fatherly solicitude, may answer their petitions, We make this pronouncement: Whether considered as a doctrine, or an historical fact, or a movement, Socialism, if it remains truly Socialism, even after it has yielded to truth and justice on the points which we have mentioned, cannot be reconciled with the teachings of the Catholic Church because its concept of society itself is utterly foreign to Christian truth.”

I would only add that the term ‘Catholic’ means “universal”; and indeed, that is a universal and absolutely truthful statement of Socialism – Marxism – being antithetical to ANY real Christianity of whatever sect or discipline. It is anti-Christ in its very being. Note that the current Pope has shifted position on that belief 180 degrees, he appears to be Satanic in his beliefs to the shame of good Catholics and other Christians everywhere. The Democrats are Socialists, and many Republicans with them. In fact the Communist Party of the United States claims that they and the Democrat Party are “ONE AND THE SAME” party.

The root of all evil is the LOVE of money, and with that, the ultimate trip for them – POWER. That is why the massive wealth of the ‘owners’ of this Earth, the international banking groups, led by the Rothschild’s, own almost all the wealth that exists in this world, including a stranglehold on most of the world’s nations and governments, and hold the commensurate power it enables. Because Lucifer owns the bankers, we can say that Bankers are energized by Lucifarian thought patterns – the common denominator of all the worlds Secret Societies – CFR, Trilateral Commission, Pilgrim Society, Bilderberg Club, Free Masons, Rosicrucian’s, Illuminati, Black Lives Matter, Fabian Society, and so on.