To most people, the Son of Sam is a crazed serial killer who terrorized New York in the late 70s. However, a closer look at this case reveals clear links to the occult elite and provides rare insight into its dark motivations. The goal of it all: Human sacrifices and occult rituals on a mass scale.

In 1997, David Berkowitz – the infamous serial killer dubbed The Son of Sam – agreed to be interviewed by the investigative journalist Maury Terry. At this point, Berkowitz had been incarcerated for over 20 years and converted to Christianity. He even gave himself a new name: “The Son of Hope”.

Although he never denied the fact that he killed innocent people and that he deserved his multiple life sentences, Berkowitz had always maintained one vital fact: He did not act alone. Not only that, the Son of Sam murders were not random acts of violence carried out by a lone nut: They were – as crazy as it sounds – ritual sacrifices carried out by a highly organized Satanic cult.

Maury Terry with David Berkowitz preparing for the 1997 interview.

At the time of this interview, Maury Terry had been investigating the Son of Sam case for over two decades. Ten years prior, he released The Ultimate Evil: An Investigation of America’s Most Dangerous Satanic Cult, a book that presented evidence that these killings were linked to a massive occult network.

In this interview, Terry was looking to confirm important facts he uncovered in his years of research. For instance, there was evidence that the 1977 killing of 20-year-old Stacy Moskowitz was mostly likely filmed by someone who was hiding in a van. If this was true, the entire “lone nut” theory would be disproved. Furthermore, it would signify that these murders were actually team efforts that even implicated the production of snuff material to be sold in underground circles.

When Terry asks about this mysterious van, Berkowitz answers:

– There was some filming going on. Somebody wanted to film it for somebody else, or, huh, whatever …

– Are you stating to me, then, that they made a snuff film, from that van, of the shooting of Stacy Moskowitz and Robert Violante?

– Maybe that’s what you can call it.

– Was this the cult group itself that was responsible for the Son of Sam murders? Or was there something else that went on?

– Uh, there was another group, a more elite group, hidden into it and woven into it, you know?

In his last answer, Berkowitz stated that the coven he belonged to (named The Children) was infiltrated by an “elite group” that pushed them further into the “dark side”. In his research, Terry believed that this “elite group” might have been The Process – a powerful satanic group that became extremely influential in the early 1970s before going underground.

– What other kinds of crimes did they commit?

– Involving children? What do you mean? What kind of business were they in? You’re telling me the Process was producing child p*rnography? Is that what you’re saying? And providing children?

Berkowitz nodded. Right after, the producer stopped the interview.

This is where a thorough investigation of The Son of Sam case leads: To the rotten core of the occult elite which is obsessed with the worse abominations known to man.

In recent months, Terry’s work gained newfound attention with the Netflix series Sons of Sam: Descent into Darkness – a documentary series that heavily focuses on Maury Terry’s investigation. However, despite presenting the mountain of evidence accumulated by Terry throughout his life, the documentary ended up discrediting him, even using the words “delusional” and “two-fisted drunk” to describe him.

Reviews of the Netflix series in mainstream media even linked Terry’s investigation to modern “conspiracy theories”, strongly suggesting that one should not fall into this rabbit hole.

Why is Terry’s research currently receiving such poor treatment in mass media? Is it because the Son of Sam case provides a rare insight into the sick world of the occult elite, one that media has been hard at work concealing every since?

Here’s a look at this disturbing yet extremely revealing case.

David Berkowitz after his arrest.

Between July 1976 and July 1977, the city of New York was in a state of terror. Six people were shot to death and seven others were wounded by a serial killer who was dubbed The Son of Sam. The city’s state of panic was heightened by intense media coverage which published disturbing letters written by the killer himself. Other than taunting the police, some letters contained bizarre occult symbols.

One of the letters sent by The Son of Sam containing a magical sigil.

In August 1977, the NYPD proudly announced that The Son of Sam was caught. Officials revealed that the serial killer was David Berkowitz, a 25-years-old Jewish man who lived in Yonkers and who claimed that a demonic dog named Sam was ordering him to commit murders.

While the city of New York let go a collective sigh of relief after the arrest of Berkowitz, some observers quickly realized that lots of details were not adding up. A close analysis of eyewitness accounts did not match the whereabouts of Berkowitz in several crime scenes. Furthermore, Berkowitz looked nothing like several composite sketches released by the police. 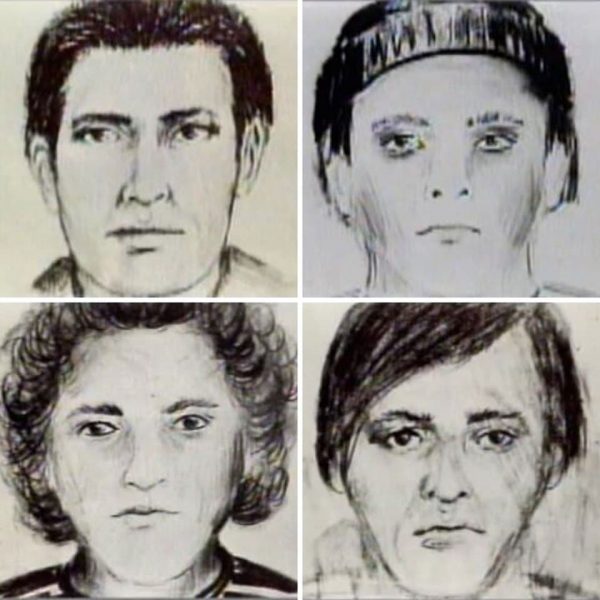 Police sketches of the Son of Sam. Many of them closely resemble other members of his coven. In an interview, Berkowitz confirmed that the suspect on the top-right was actually a “high-level” woman who came from out of town to take part in the ritual killings.

There was also another vital element that was completely ignored by the police force: Nearly every clue relating to this case could only be understood with knowledge of occultism, witchcraft, and black magic.

Sons of the Occult Elite

Shortly after his incarceration, David Berkowitz began reaching out to various individuals through letters that provided relevant information relating to the case. According to Maury Terry, David Berkowitz wanted the Son of Sam case to be resolved and, more importantly, he wanted the truth to come out. However, he could not outright “rat out” cult members because that would put his family and his own life at risk.

In 1979, Berkowitz sent a letter to a California preacher that summed up his situation.

“I really don’t know how to begin this letter, but at one time I was a member of an occult group. Being sworn to secrecy or face death I cannot reveal the name of the group, nor do I wish to. This group contained a mixture of satanic practices which included the teachings of Aleister Crowley and Eliphaz Levi. It was (still is) totally blood-oriented and I am certain you know just what I mean. The Coven’s doctrines are a blend of ancient Druidism, the teachings of the Secret Order of the Golden Dawn, Black Magick and a host of other unlawful and obnoxious practices.

As I said, I have no interest in revealing the Coven, especially because I have almost met sudden death on several occasions (once by half an inch) and several others have already perished under mysterious circumstances. These people will stop at nothing, including murder. They have no fear of manmade laws or the Ten Commandments. (…)

I think it is imperative that I educate certain people—the people whose job it is to clean up after this coven. Of course I am talking about the authorities. Actually it is my duty as a citizen of this planet to do so. But it would be up to those concerned people to do their own investigating. Knowing the fearlessness and dedication this group possesses, I fear greatly for my family. (…)

To break away completely is impossible because of a Pact each new member signs in his own blood. Also, each new and carefully screened recruit supplies a picture or pictures of all his or her family members, plus their addresses. These items are used, if necessary, as tools for blackmail, coercion and eventually physical harm should one attempt to betray the group.”

The “group” Berkowitz belonged to was named The Children. They often met at night at Untermyer Park in Yonkers, New York to partake in black masses and ritual sacrifices.

Complete with sphinxes and Masonic twin pillars, Unteryer Park was built on occult principles and is filled with symbolism relating to elite secret societies. It certainly qualifies as a Sinister Site.

Untermyer Park was built by Samuel J. Untermyer, an extremely powerful figure in U.S. history who was deeply connected with the occult elite. According to Maury Terry, Untermyer was a member of the New York City temple of the Hermetic Order of the Golden Dawn, one of the most powerful occult secret societies of its day.

During the 1970s, Untermeyer Park was in an advanced state of neglect and became a meeting place for The Children who met in an abandoned building they called the “Devil’s Cave”.

Pictures of the “Devil’s cave” in Untermeyer Park where satanic rituals took place.

In a 1993 interview, Berkowitz described what happened in the Devil’s cave.

– We had a spot where there was like a circle with rocks. (…) You could actually feel, like, a force out there, a presence out there in the darkness. We began to hear more and more conversations about witchcraft, about black magic. We were really having little religious services almost. I did begin to witness some animal sacrifices.

We were at a park, I guess it was Untermeyer Park. We had this circle formed. And we said OK let’s start chanting now, let’s call the names of the demons. Let’s call Satan’s name, let’s call Lucifer, let’s bring him, let’s summon from the netherworld, from the air, and let’s ask him to annoint you, to knight you as one of his royal soldiers to do his bidding to do his will. There were definitely lots of arsons. These demons wanted fire.

– Yes it was Lucifer. It was Molech, another god who wanted fire sacrifices.

One of the many dead dogs found around Untermeyer Park as a result of animal sacrifice.

In another interview, Berkowitz revealed the true meaning of the name Son of Sam:

“Sadly, the psychiatrists or the psychologist are so blind. You know, I tried to explain to them what was happening but they couldn’t grasp it – who Sam really was. I hate to talk about this because they have made a joke about this for so very long, you know the talking dog.

Basically, I had given them to whole thing in a nutshell and they never quite caught on that the highest ranking demon is Samhain. And these people who died were sadly … for him.”

“As mentioned, covens pay homage to Satan, just as traditional religions honor God. Accordingly, in defiance of the Catholic Church, the concept of the Black Mass evolved during the Middle Ages. In the Black Mass, satanic prayers were substituted for those contained in the Catholic service; the Lord’s Prayer was recited backwards; crosses were inverted; black vestments were worn; chalices and hosts stolen from churches were used in the rituals.

Elements such as feces, urine, vomit and animal blood were also employed. The host was sometimes smeared with feces or vomit, and urine was frequently poured into a chalice, and consumed. Animals, such as dogs and cats, were sacrificed to Satan and their blood drunk in fertility rites or for other purposes. Some covens, questing for the ultimate sacrifice, offered humans to the devil.”
– Maury Terry, The Ultimate Evil