The OpenVAERS website released its most recent weekly numbers on Saturday.

*OpenVAERS.com* is currently down. It has been down for hours. OpenVAERS is a privately run site that data mines the official CDC VAERS site. The more difficult to read CDC-linked *VAERS* website is still up.

This is up from 11,140 total vaccine deaths last week.

And this was up from 9,125 reported deaths from the COVID-19 vaccinations total from the previous week.

The number of deaths linked to the CDC promoted vaccines this year has absolutely skyrocketed. According to the CDC’s own data.

Obviously, the VAERS website has gained much attention — not from the fake news mainstream media — but from Americans seeking the truth on the COVID vaccines.

This had the vaccine pushers in a panic.
They immediately called on the tech giants to “fact-check” anyone who would report on the CDC-linked website’s numbers. 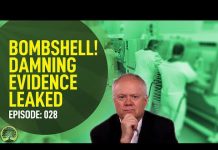 Odds Increase that SARS CoV-2 was Lab Made