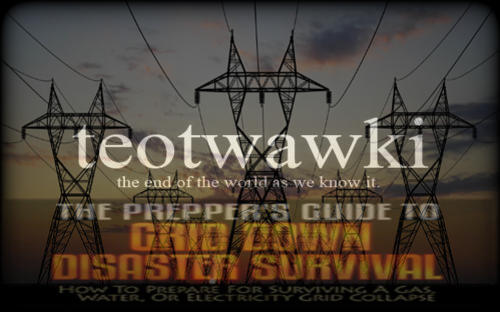 (ANP: In light of the National Guard just simulating a cyber attack that brought down utilities nationwide as shared in this new story over at The Drive, this report by Dr. Peter Vincent Pry takes on added importance, especially considering how quickly America would come crashing down in a long-term grid down scenario. In the only video at the bottom of this story, our videographer talks with us about The Drive story and the growing likelihood of such a TEOTWAWKI scenario.)

Non-Nuclear Electromagnetic Pulse (NNEMP) weapons, more commonly known as Radio-Frequency Weapons, are non-nuclear weapons that use a variety of means, including explosively driven generators or high-power microwaves, to emit an electromagnetic pulse similar to the E1 HEMP from a nuclear weapon, except less energetic and of much shorter radius.

Unlike the nuclear HEMP threat, NNEMP weapons are much more readily available to and easily exploitable by terrorists and the least sophisticated state actors. NNEMP weapons can be built relatively inexpensively using commercially available parts and design information available on the internet.

EMP simulators that can be carried and operated by one man, and used as an NNEMP weapon, are available commercially.

Special mention must be made of the ongoing technological revolution in Non-Nuclear EMP weapons, which are becoming more powerful, more miniaturized and lighter-weight, and deliverable by cruise missiles or drones. The marriage of NNEMP warheads to drones or cruise missiles, preprogrammed or equipped with sensors to follow high-power electric lines and to target control centers and transformers, introduces a major new threat to national power grids.

Dozens of nations reportedly have NNEMP weapons or are developing them. Some of these are Russia, China, North Korea, Iran, Pakistan, India, Israel, Germany, the United Kingdom, France, Australia, and Switzerland.

Non-Nuclear EMP weapons, as a cutting-edge military technology, are being developed largely clandestinely, with relatively little detailed open source reporting on specific national programs, let alone on what terrorists may be doing.

Relatively small numbers of NNEMP cruise missiles or drones—perhaps only one capable of protracted flight—could inflict a long nationwide blackout.

U.S. military power projection capabilities would be severely crippled or altogether paralyzed by a protracted nationwide blackout. CONUS military bases depend upon the civilian electric grid for 99% of their electric power. 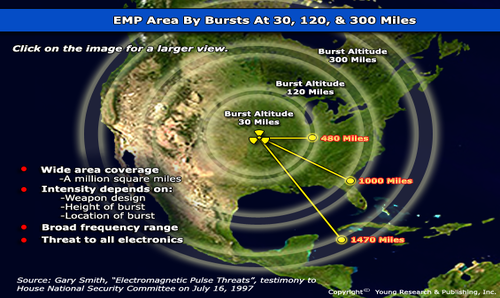 Non-Nuclear Electromagnetic Pulse (NNEMP) Attack On The U.S. Electric Power Grid
BACKGROUND
Non-Nuclear Electromagnetic Pulse (NNEMP) weapons, more commonly known as RadioFrequency Weapons, are non-nuclear weapons that use a variety of means, including explosively driven generators or high-power microwaves, to emit an electromagnetic pulse similar to the E1 HEMP from a nuclear weapon, except less energetic and of much shorter radius. The range of NNEMP weapons is rarely more than ten kilometers.
International scientific and electronic engineering organizations describe the NNEMP threat as “Electro-Magnetic (EM) Terrorism” and, less dramatically, as “Intentional Electro-MagneticInterference” (IEMI). Non-Nuclear Electromagnetic Pulse (NNEMP) weapons is the term used here to emphasize that the NNEMP threat has significant similarities to nuclear HEMP, similar technical solutions, and poses a much greater threat than implied by the word “Interference” in IEMI.
“There is enormous diversity in possible electromagnetic weapon designs, for both large scale and highly focused attacks, both against civil and military targets,” according to Dr. Carlo Kopp, one of the world’s leading experts on NNEMP weapons, “There are many possible taxonomical divisions for electromagnetic weapons”:
–“Directed Energy Weapons vs. ‘one shot’ E-Bombs;”
–“Nuclear (HEMP) E-Bombs vs. Non-nuclear E-Bombs;”
–“Narrow Band Weapons vs. Wideband or UWB [Ultra-Wide Band] weapons;”
–“High Power Microwave vs. ‘Low Band’ weapons;”
–“Persistent Area Denial (AD) weapons vs. Non-Persistent weapons;”
–“Explosively pumped vs. Electrically pumped weapons.”  Source
Unlike the nuclear HEMP threat, NNEMP weapons are much more readily available to and easily exploitable by terrorists and the least sophisticated state actors.
NNEMP weapons can be built relatively inexpensively using commercially available parts and design information available on the internet. In 2000, the Terrorism Panel of the House Armed Services Committee conducted an experiment, hiring an electrical engineer and some students to try building an NNEMP weapon on a modest budget, using design information available on the internet, made from parts purchased commercially, available to anyone.
They built two NNEMP weapons in one year, both successfully tested at the U.S. Army proving grounds at Aberdeen. One was built into a Volkswagen bus, designed to be driven down Wall Street to disrupt stock market computers and information systems and bring on a financial crisis. The other was designed to fit in the crate for a Xerox machine so it could be shipped to the Pentagon, sit in the mailroom, and burn-out Defense Department computers.
EMP simulators that can be carried and operated by one man, and used as an NNEMP weapon, are available commercially.
For example, one U.S. company advertises for sale an “EMP Suitcase” that looks exactly like a metal suitcase, can be carried and operated by one man, and generates 100,000 volts/meter over a short distance. The EMP Suitcaseis not intended to be used as a weapon, but as an aid for designing factories that use heavy duty electronic equipment that emit electromagnetic transients, so the factory does not self-destruct.
But a terrorist or criminal armed with the “EMP Suitcase” could potentially destroy electric grid SCADAs, possibly shutdown transformers, and blackout a city. Thanks to NNEMP weapons, we have arrived at a place where the technological pillars of civilization for a major metropolitan area could be toppled by a single madman.
The “EMP Suitcase” can be purchased without a license by anyone.
According to the Wall Street Journal, a classified study by the U.S. Federal Energy Regulatory Commission found that damaging as few as 9 out of 2,000 EHV transformers could trigger cascading failures, causing a protracted nationwide blackout of the United States. Terrorists armed with NNEMP weapons might use unclassified computer models to duplicate the reported U.S. FERC study and figure out which nine crucial transformer substations need to be attacked in order to blackout the entire national grid for weeks or months.
Big blackouts in the U.S., including the Great Northeast Blackout of 2003 that put 50 million people in the dark, caused by a tree branch, and the 2021 Texas blackout, caused by an ice storm, highlight the fragility of the national power grid. Malevolent actors are surely cognizant of this fragility.
Even random attacks using NNEMP weapons against less than 100 EHV transformer control substations located in all three U.S. grid systems—Eastern, Western, and Texas—would probably suffice to inflict a protracted nationwide blackout.
NNEMP weapons could offer significant operational advantages over assault rifles and bombs. Something like the “EMP Suitcase” could be put in the trunk of a car, parked and left outside the fence of an EHV transformer or SCADA colony, or hidden in nearby brush or a garbage can, while the bad guys make a leisurely getaway. Or a single NNEMP weapon could be driven from one transformer substation to another (the substations are unguarded) to knock-out enough SCADAs and transformers to cause a regional or even national protracted blackout.
If the EMP fields are strong enough, an NNEMP weapon could be more effective, and far less conspicuous, than using explosives or small arms to attack transformers and controls at substations. Since all electronics within the field of the NNEMP could be damaged, precision targeting would be unnecessary, as is the case for firearms and explosives. Unlike firearms and explosive munitions, damage inflicted by NNEMP weapons might be mistaken as a freak accident or unusual systemic failure. 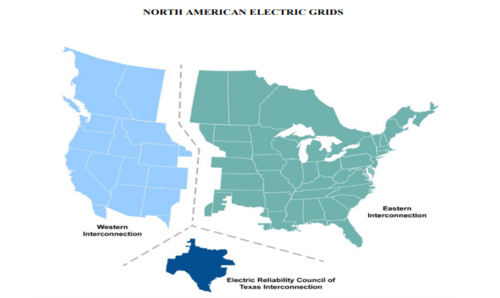 Some documented examples of successful attacks using NNEMP weapons, and accidents involving electromagnetic transients, are described by the Department of Defense:
–“In the Netherlands, an individual disrupted a local bank’s computer network because he was turned down for a loan. He constructed a Radio Frequency Weapon the size of a briefcase, which he learned how to build from the Internet. Bank officials did not even realize that they had been attacked or what had happened until long after the event.”
–“In St. Petersburg, Russia, a criminal robbed a jewelry store by defeating the alarm system with a repetitive RF generator. Its manufacture was no more complicated than assembling a home microwave oven.”
–“In Kyzlyar, Dagestan, Russia, Chechen rebel commander Salman Raduyev disabled police radio communications using RF transmitters during a raid.” –“In Russia, Chechen rebels used a Radio Frequency Weapon to defeat a Russian security system and gain access to a controlled area.”